KINGSBURG – After a long battle, the Central Valley Christian Cavaliers defeated the Kingsburg Vikings 27-26 to remain the only team undefeated in the Tri-County Kings Canyon League.

Before the game, the announcer called the game “a preview of the league championship.” Prior to playing each other, both CVC and Kingburg were undefeated. But someone had to fall. The Vikings played an excellent game of football but thanks to the Cavaliers’ choice to go for a two-point conversion on their second touchdown and making it, they ended up winning by a single point.

“I don’t know if we played our best game but we played one point better and had a little luck on our side,” CVC head coach Mason Hughes said. “I’m just really proud of our guys’ grit.” 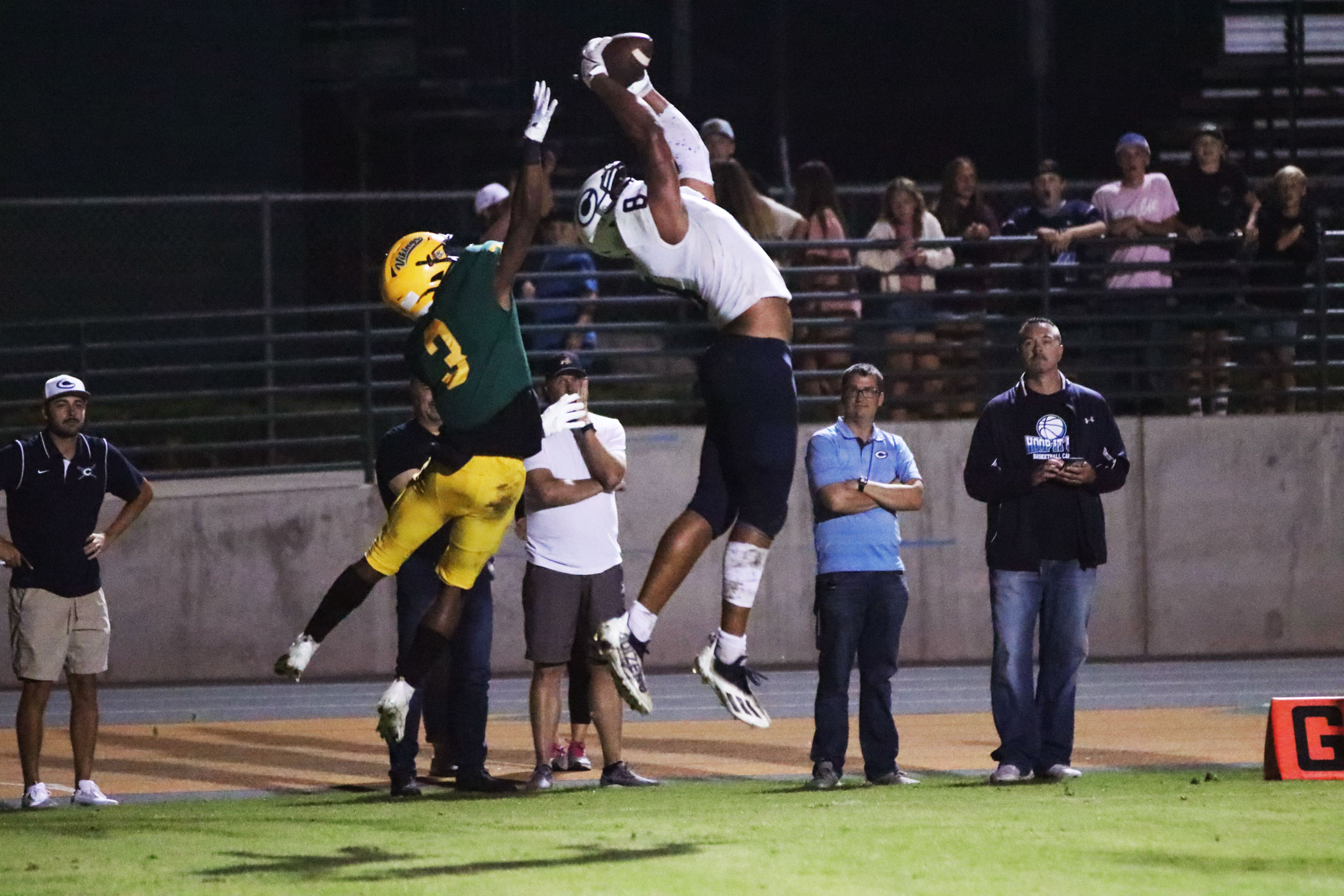 Cavalier senior Jaedon Moore jumps to catch the two point conversion putting CVC up 15-7 in the first half. Photo by Claire Livingston

Quarterback Max Bakker had a great game, completing several passes to move his team down the field.  The first touchdown was a beautiful pass to tight end Zach Zwart in the middle of the first quarter that he ran into the end zone. Zwart also played an exceptionally good game. He played both ways the entire game and scored two of the team’s four touchdowns.

When the Cavaliers scored their second touchdown, they decided to go for a two-point conversion. They made it off of a pass to Jaeden Moore, which he leapt into the air to catch in the endzone, putting CVC up 15-7. That extra point proved to come in handy when the Cavaliers needed it in the fourth quarter.

The Vikings were up 20-15 going into the fourth and everyone was tired. CVC’s junior running back Bryson Donelson was playing both ways for the first time and running all over the Vikings. But the Cavaliers needed a touchdown. That one touchdown was between them and the victory. With eight minutes left, Zwart caught another pass, this time in the corner of the endzone, and put the Cavaliers up 21-20.

“Zach was probably player of the week for sure,” Hughes said.

But with so much time left on the clock, Vikings running back Trace Jackson was able to sneak through the CVC defense and run it into the endzone. They went for a two point conversion, but failed. The Cavaliers then had the ball and a mission. 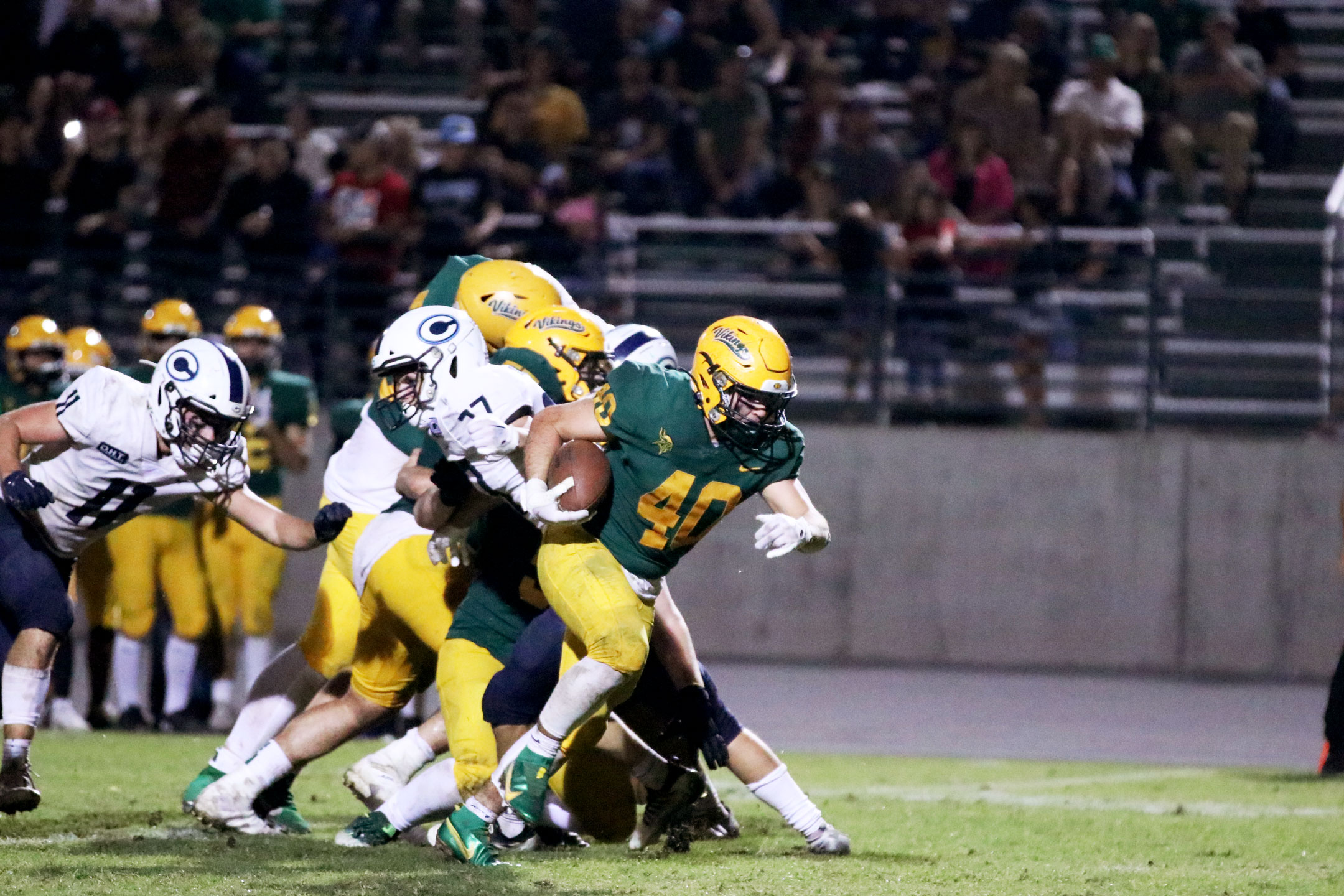 Kingsburg senior Trace Jackson runs the ball. Jackson was able to sneak through CVC's defense and run the ball into the endzone. Photo by Claire Livingston

They marched down the field, one down at a time as time ticked off the clock. The offensive line was a wall between the Vikings defense and Bakker. Moore and Zwart lined up with the receivers as the Cavaliers made their way towards victory. Long passes got them into the red zone, then, with a minute remaining, Donelson ran the ball in for the final touchdown. It didn’t matter that they failed the two-point conversion on this one, because the one from earlier put them up 27-26.

The Vikings put up a strong effort to score another touchdown in the minute they had left, but the Cavaliers’ determination to stop them was too strong. The Vikings were stopped on fourth down, turned over the ball, and the Cavaliers took a knee.

“[CVC] knew they’d be in a fight and it was a fight,” Kingsburg head coach David Wilson said. “And if tonight proved anything, it just proved we can play with the best in the valley and we’re excited for it.”

Most teams that face CVC find themselves doubling the coverage on Moore, who committed to play at Oregon next year. Kingsburg junior Kenyan Simpson covered Moore the whole game, a challenge for any player. The Vikings also struggled to contain Donelson, who ended up being a challenge for their defense.

“I thought we were good on both sides,” Wilson said. “I thought we handled [Donelson] pretty well. He’s still a tough player, don’t get me wrong. We showed some real grit tonight.”

The Vikings will take their grit and use it against the Reedley Pirates on Oct. 21. They are now second in the Tri-County Kings Canyon League. 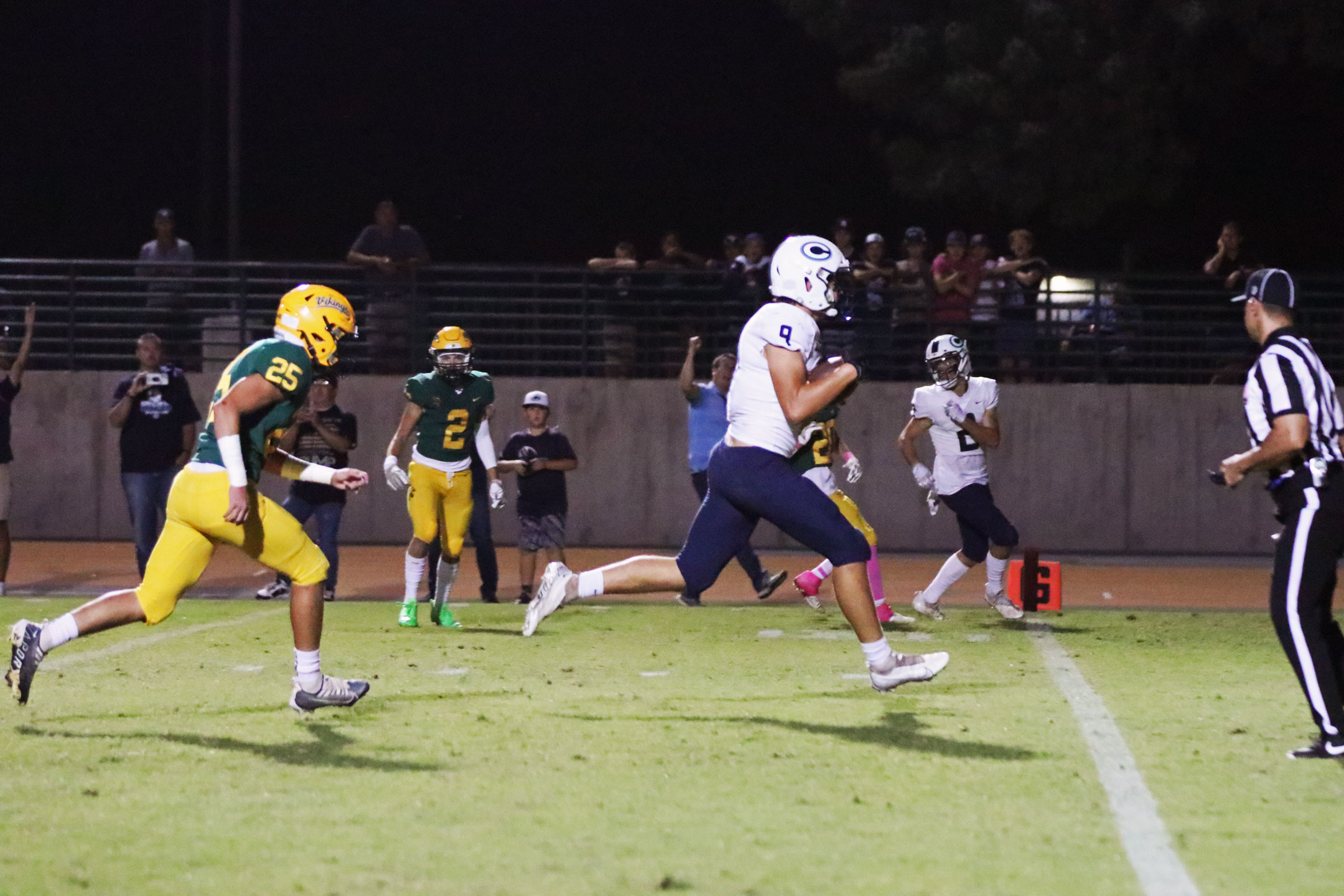 Cavalier senior Zack Zwart makes a run for a touchdown. He scored two of the teams four total touchdowns, and played both ways the whole game. Photo by Claire Livingston

Hughes also mentioned his team’s “grit” in finishing out the game for the win. Especially at an away game in a huge stadium like the one at Kingsburg, it can be hard for players to stay motivated when their team is behind.

The Cavaliers will return home to face Washington Union on Oct. 21. They are currently number one in the Tri-County Kings Canyon league and only have two games between them and a league championship. After that, they will pursue their goals of a valley championship, before hoping for a state championship.