FOOTBALL: The Tribe take down Dinuba

TULARE – The Tulare Union Tribe beat the Dinuba Emperors 21-16, tying the two teams for third place in the West Yosemite League heading into the final week of the regular season.

The Tribe came out strong with two touchdowns right after the other. A special teams touchdown on the kickoff after their first score put the Tribe up 14 points before Dinuba’s offense had even set foot on the field. The Tribe followed that up with a third touchdown in the second quarter and the Emperors were never able to catch up.

After a scoreless third quarter, the Emperors made a solid attempt at a comeback. The Tribe had fumbled the ball and Dinuba recovered it, taking the opportunity to score their second touchdown of the game. A failed two-point conversion attempt left the score at 21-16. Dinuba needed another touchdown to win it all and they almost did. 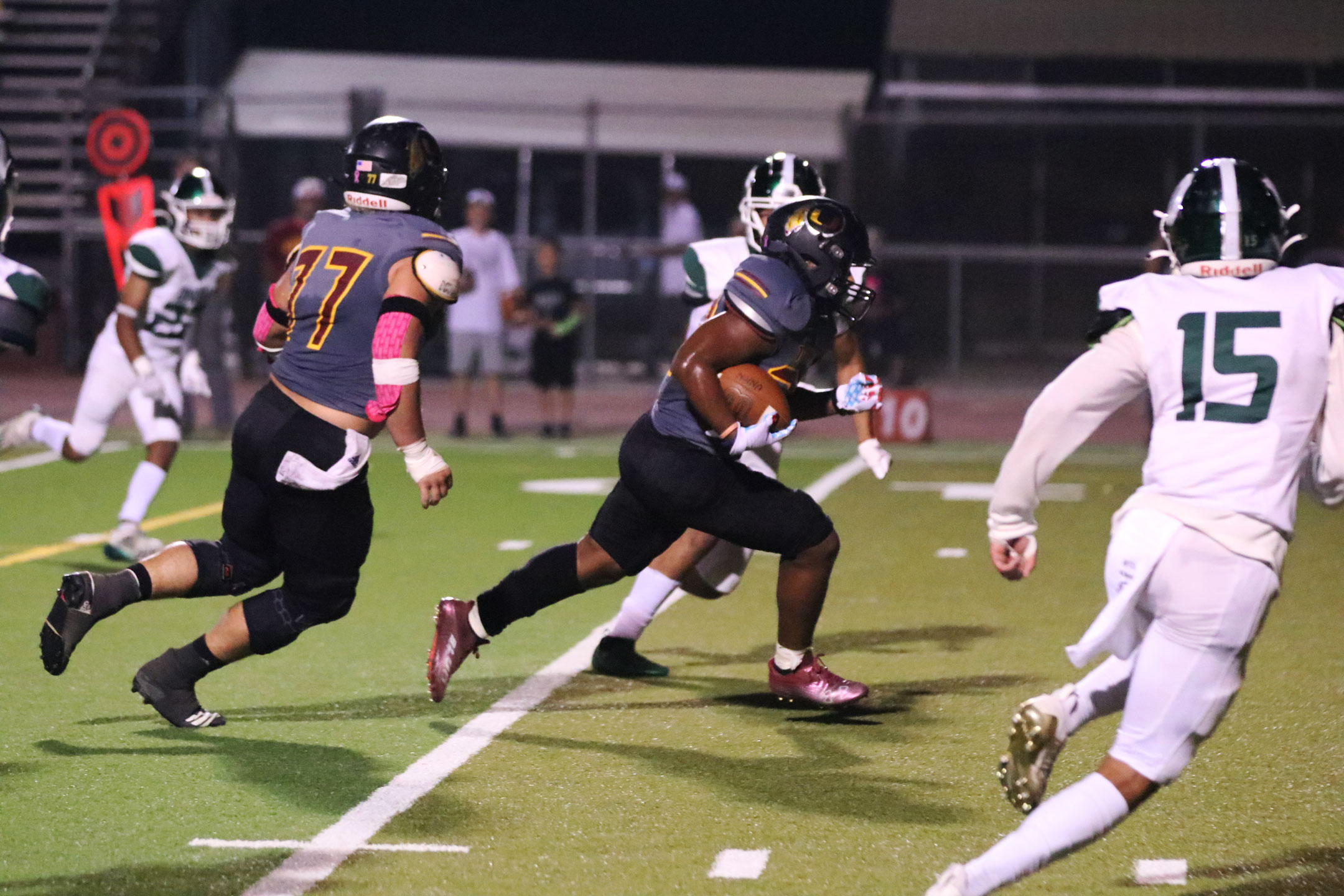 The Emperors stopped the Tribe on fourth down and the ball was turned over on Dinuba’s 26-yard-line. Almost three-quarters of the field stood between the Emperors and victory. They had nine minutes remaining. The Emperors marched the ball 66 yards before they fumbled. The fumble was recovered by the Tulare Union defense and it was over.

Although Dinuba did force the Tribe to punt on fourth down, they got the ball on their own 44-yard-line with only 20 seconds left. Their quarterback, CJ Hernandez, tried throwing a long pass with seven seconds remaining, but it fell short of the receiver’s hands. The Tribe took the victory 21-16.

“I think in the second half we played some really good football,” Dinuba head coach CJ Lester said. “Obviously we didn’t cap it off the way we wanted to.” 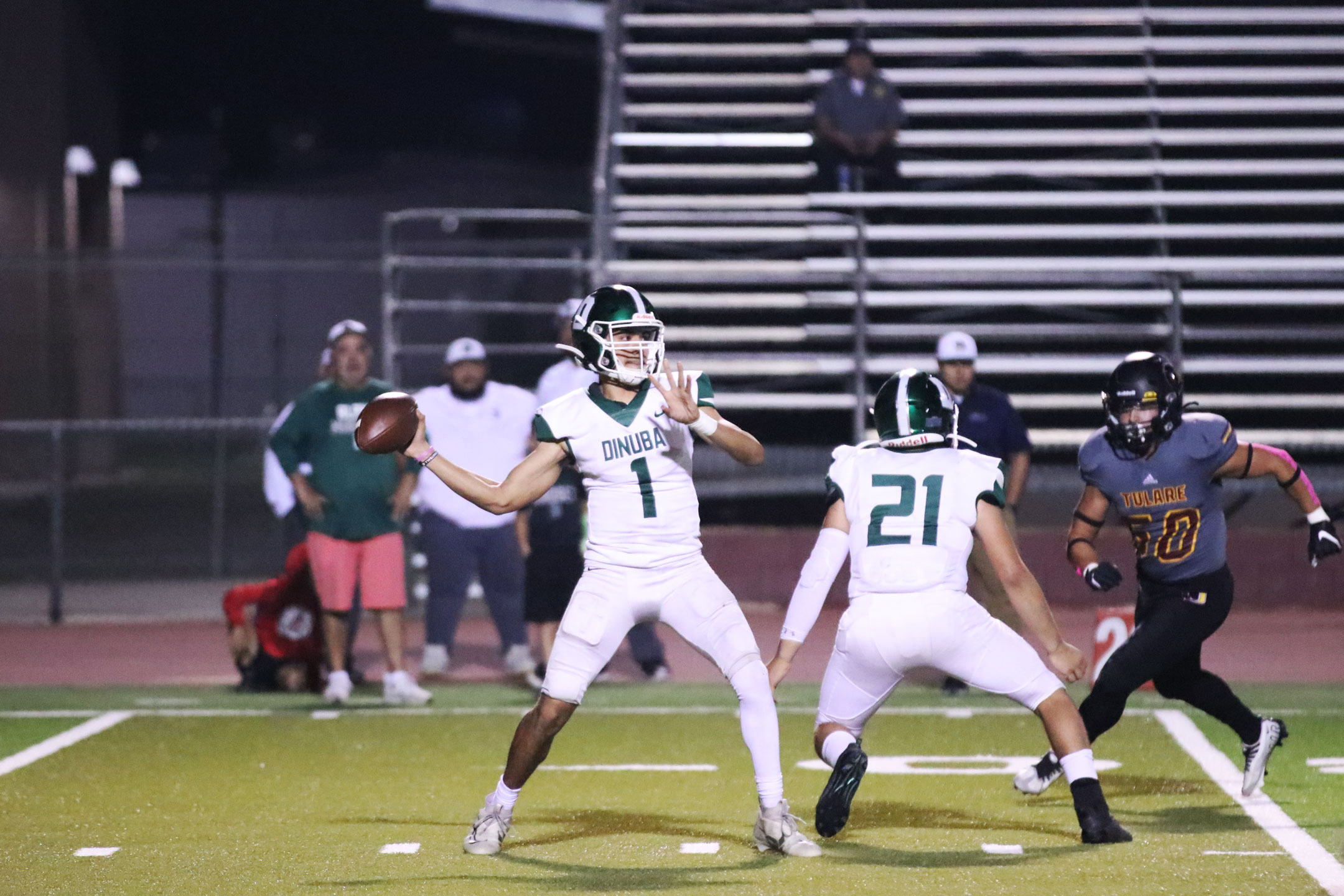 Dinuba senior CJ Hernandez, searches for a teammate on the field. He attempted a long pass with seven seconds remaining, but it fell short of the receiver's hands. Photo by Claire Livingston

Defensively, Dinuba has not let teams get away with running the ball as fast as Tulare Union was able to in the first quarter. Even though it took the Tribe six minutes to score their first touchdown after receiving the kickoff, it was all running plays, which the Emperors’ defense has been able to stop so far this year.

With the momentum of the special teams recovering their own kickoff on the Emperors’ 10-yard-line and then scoring again on the next play, the Tribe started the game on a hill too high for the Emperors to climb.

Junior Sonny Guess, running back and wide receiver for Tulare Union, had an excellent game. He made several key plays to get the Tribe’s offense in position to score. It was the freshman quarterback Jordan Crisp who crossed the line to score the first touchdown, and Guess who ran in the second one. Junior Tieler Peterson scored the third touchdown off a pass from Crisp. Freshmen quarterbacks are not common on varsity teams, but Crisp stays calm in the pocket and trusts his running backs and receivers to run their routes.

“Even when things started falling apart a little in the second half [Crisp] still stayed calm,” Bennett said. “He does a really good job.” 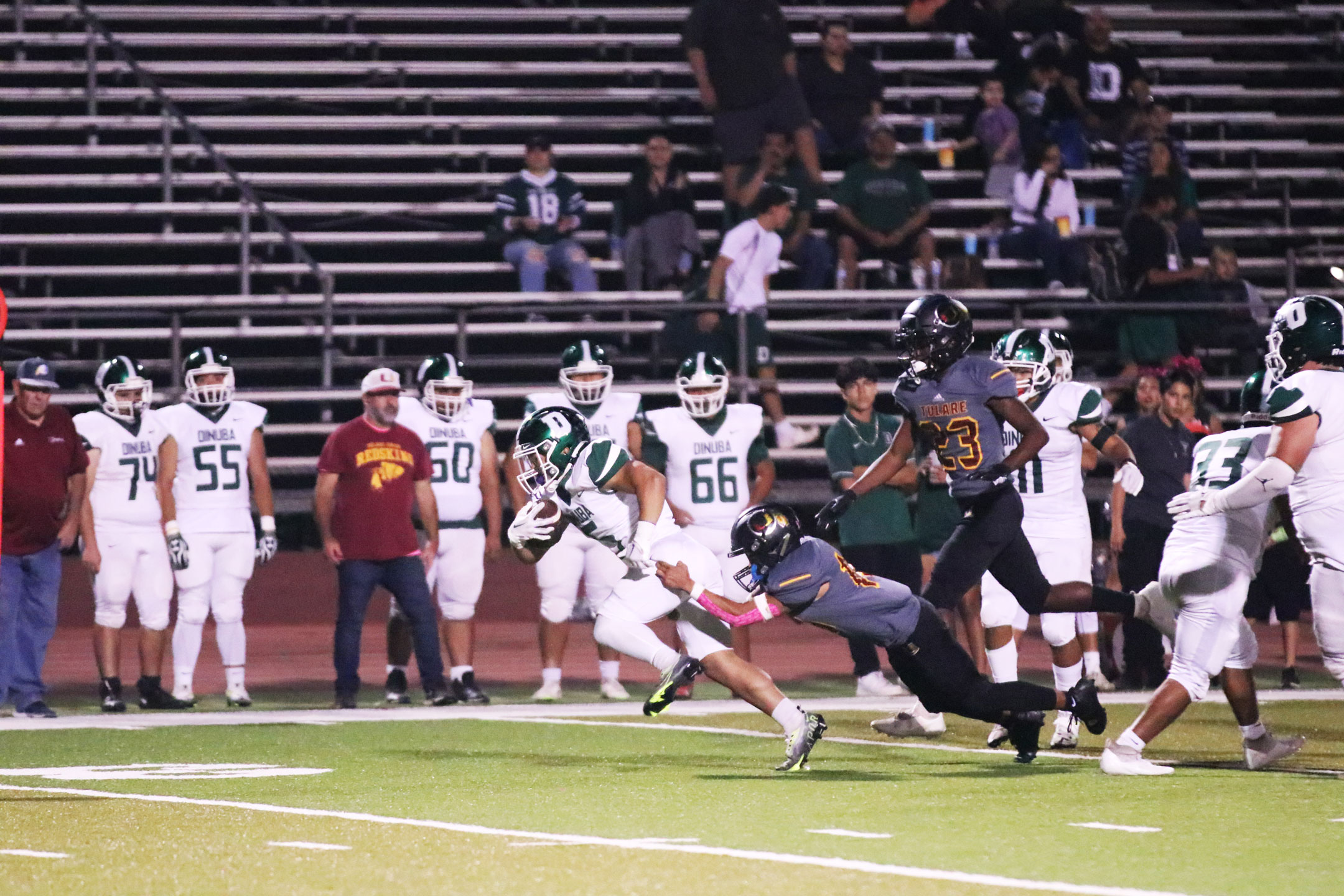 On the Dinuba side, running back Hector Gonzalez had a great game. According to Lester, it was probably the best game he’s had all year. The Emperors return to Bob Mathias Stadium on Oct. 27 to face the Mission Oak Hawks for their final regular season game of the year.

“We’re hungry for a win to get in the playoffs and get it rolling,” Lester said. “So I just really hope Hector has another great game just like that.”

Tulare Union and Dinuba are now tied in league play with matching records of 2-2, tying them for third place in the West Yosemite League. Tulare Union will face their rivals Tulare Western at Bob Mathias Stadium on Oct. 28 for the annual Bell Game.