FARMERSVILLE – Led by several seniors who were honored before the final home game of the season, the Aztecs beat the Titans 35-14.

Thanks to impressive blocking by the offensive line, the Aztecs were able to make confident passes that either put them in good positions to score or make huge running touchdowns. Farmersville’s defense read the opposing offense and effectively reacted, making key stops when necessary.

“I thought they really fought and played the game of inches really well,” Farmersville head coach Sean Knox said. “Special teams, there were no mistakes. We won the field position battle, we did all the little things that helped us put us in position to be able to score.”

The Aztecs were set to receive the opening kickoff, but the Titans utilized an onside kick that they recovered themselves. That possession resulted in the first touchdown of the game by Titans running back Francisco Angulo four minutes into the first quarter. While the Titans kicked short again, the Aztecs recovered it. As the clock ticked down in the first quarter, Aztecs wide receiver Alex Winslow caught a pass and ran it into the endzone to tie the score. 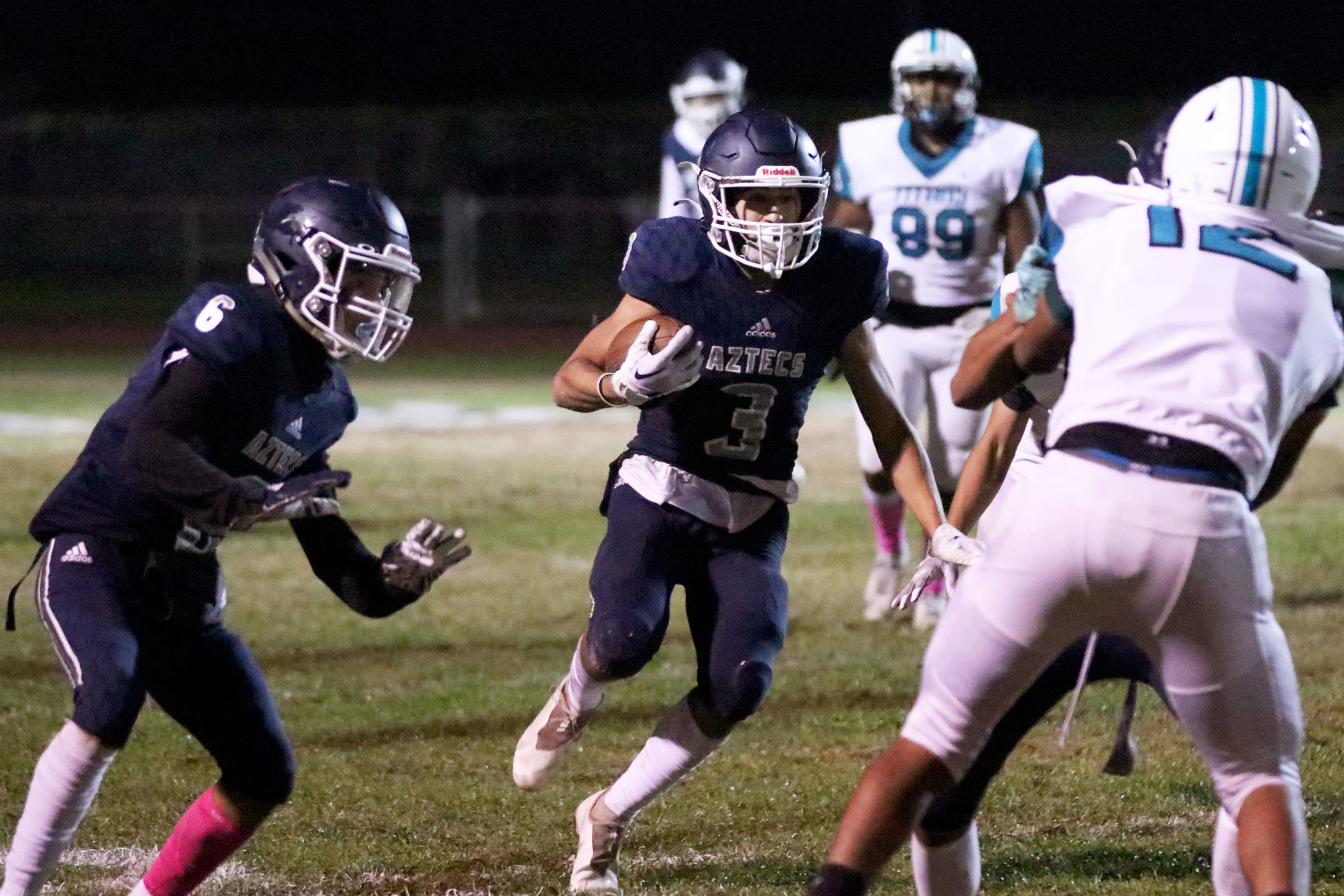 Farmersville's running back Anthony Salinas runs the ball down the field. He ran an 80-yard touchdown, and his coach Sean Knox said he is a playmaker in every sense of the word. Photo by Claire Livingston

It was during the second quarter that the Aztecs really picked up the pace. Winslow caught a short pass and ran it nearly 80 yards for a touchdown halfway through the second quarter. On high from the touchdown, the Aztecs defense quickly forced a turnover and the offense took another opportunity for a quick breakaway. Running back Anthony Salinas had another nearly 80 yard run for a touchdown just before halftime.

“Anthony Salinas is something special,” Knox said. “He’s a playmaker in every sense of the word. We’ve kind of come to expect that of him.”

Salinas had another breakaway run with a minute left in the third quarter, putting the offense in position for quarterback Ziler Almanza to run the ball into the endzone. Salinas scored his second touchdown of the night on yet another big run with five minutes left in the fourth. 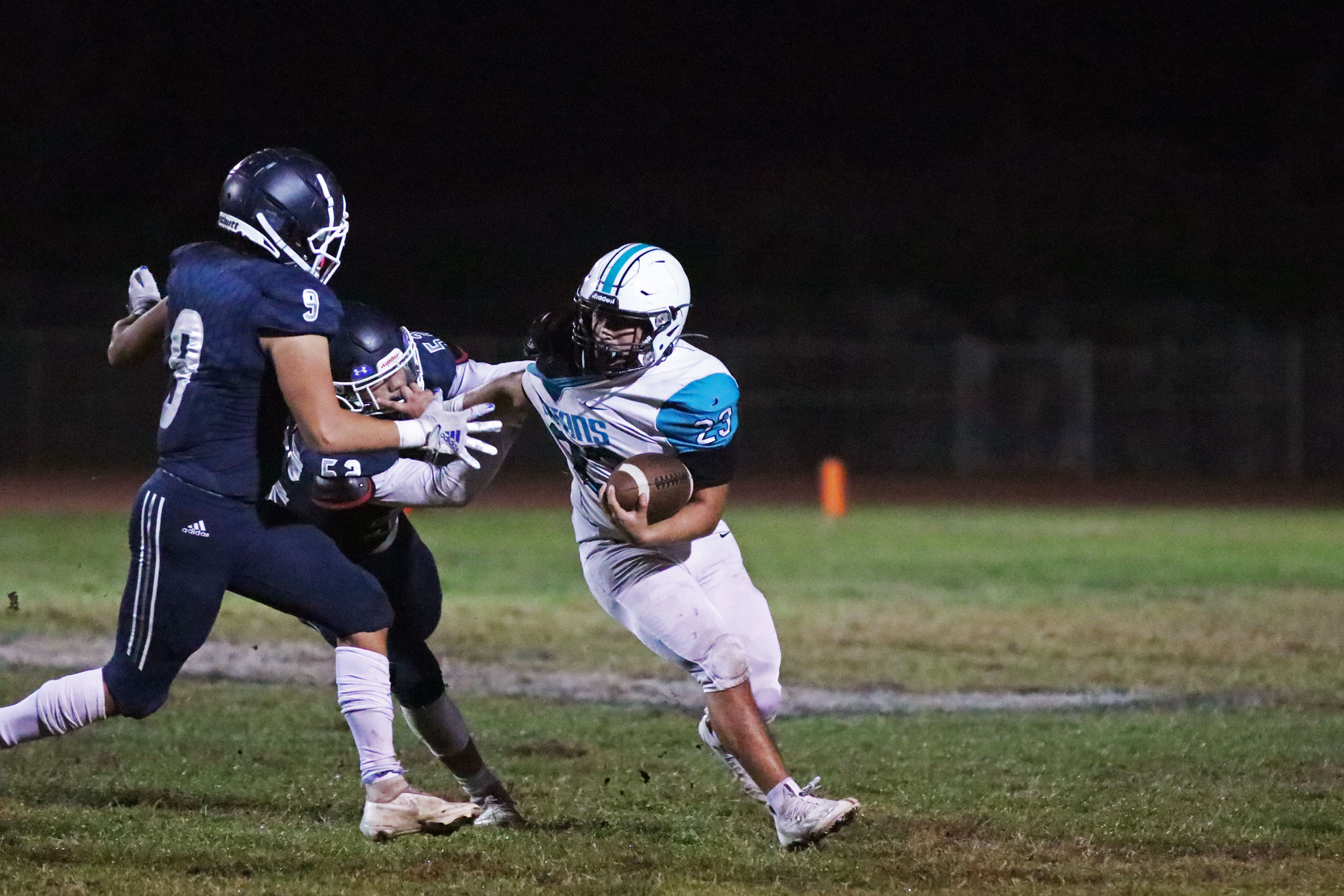 Titan running back Francisco Angulo dodges the Aztecs as he makes a run for the endzone. The Titans fought hard, but the Aztecs ultimately had them beat 35-14. Photo by Claire Livingston

The Titans scored their second touchdown seconds into the fourth quarter. Wide receiver Jose Paredas caught a pass in the open and made his way easily to the far end zone. Paredas was an important player for the Titans, making several moves on first and second down to move the Titans down field, but the Aztecs defense was hard to beat on third down, forcing the Titans to punt several times.

“We got adjusted and acclimated to what they were doing,” Knox said. “We settled in and we started to stop them. I’m proud of the defense.”

While they play on the defense as well, linebackers Hector Ramirez and Daniel Garza stood out on the offensive line. They did an excellent job of blocking on the edge so the quarterback had time to make smart passes, which led to the Aztecs making those big plays.

Farmersville is now 3-3 in league play, tying them with three other teams in the East Sequoia League. There is one more week of regular season football before the standings are locked in and playoff brackets are determined. The Aztecs will play their final game of the season at Corcoran on Oct. 28.

Orange Cove is 1-5 in league play and ranked seventh in the ESL. Their final game will be at home against Orosi on Oct. 28.