VOLLEYBALL: Aztecs advance to semifinal round

FARMERSVILLE – The Aztecs advanced to semifinals in 3-0 sweep and continue their quest to win the entire Central Section.

Farmersville came out strong in the first set with the consistent combinations and serves their fans have come to expect. In front of a packed student section and many members of the community, the Aztecs swept the Taft Wildcats with apparent ease. Only in the second set did the Wildcats pose a threat, tying the score at 24 before the Aztecs pulled off the final two points. The Aztecs sealed the deal with a 25-15 win in the third set, sending the Wildcats home with their tails between their legs.

“Like I said [after the final league game], we’re playing our best volleyball right now,” Farmersville head coach David Light said. “And it’s a complete team effort. I make changes and we still keep up the same level of play.”

The Aztecs have a strong front row, they’re strongly supported by the defensive specialists in the back row. Senior and captain Ariza Beltran made many of the receptions and passes that allowed setter Jolina Castaneda to set up the hitters for kills. Libero Aliyah Talamantez and Estrella Valencia also provided excellent defense from the hard-hitting kills Taft sent over the net. 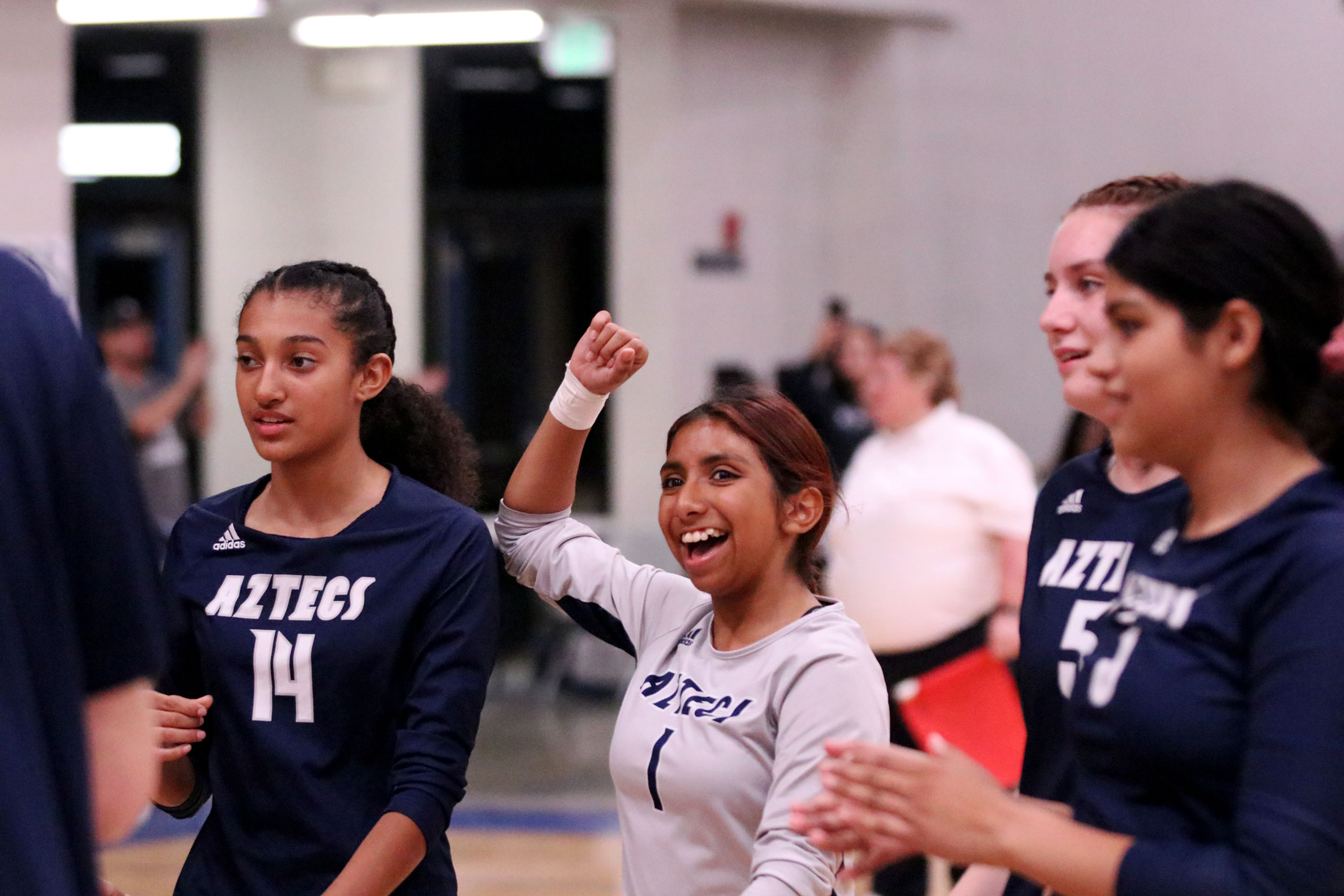 Farmersville celebrates their first set win against Taft during a 3-0 sweep. Photo by Claire Livingston

Taft’s front row cast an intimidating shadow over the shorter Farmersville team, but their height was no obstacle for the Aztecs. Farmersville hitter Janessa Garza went up for blocks against Taft’s middle Liberty Gregory and won several of the battles, earning well-deserved points for the Aztecs.

Setter Jolina Castaneda ran the Farmersville offense throughout the game. She mixed up the combinations with her leading hitters, Rachel Rojas and Jazmaine Stewart, who were able to hit or tip the ball over the Wildcats’ outstretched hands. Though the most impressive change-up of the night was a backwards set by Castaneda from the center over the net to a completely empty area of court uncovered by Taft that caused the crowd to jump to their feet.

“These girls deserve what they’re getting,” Light said. “They’ve worked hard all year, put up 31 wins and it’s not by mistake.”

The Aztecs have only lost two games over the course of the season. The two losses came in tournaments when a team wins by two out of three sets by three out of five. Out of 33 games played, they’ve won 31 and plan to keep going as long as they can. They won the East Sequoia League and are itching for a Central Section win.

The Aztecs will play Minarets at home on Nov. 1 in the semifinals. At the same time, number 1 seeded McFarland will play Washington Union. The winners of those two games will compete in the finals on Nov. 3.