VISALIA – In a game of two fast-paced offenses, the Central Valley Christian Cavaliers punched their ticket to the valley championship with a 50-41 victory over the Hanford Bullpups.

The Cavaliers faced their fastest offense yet in the semi-finals of the valley championships and won thanks to the hard work of their scout team. The Hanford Bullpups managed to put up 41 points against the undefeated Cavaliers, but CVC held strong and outpaced them on the field, scoring seven touchdowns and one safety to defeat the Bullpups 50-41 and move on to the finals.

“Anytime you win in the playoffs it’s great,” CVC head coach Mason Hughes said. “It doesn’t matter how many points you give up.” 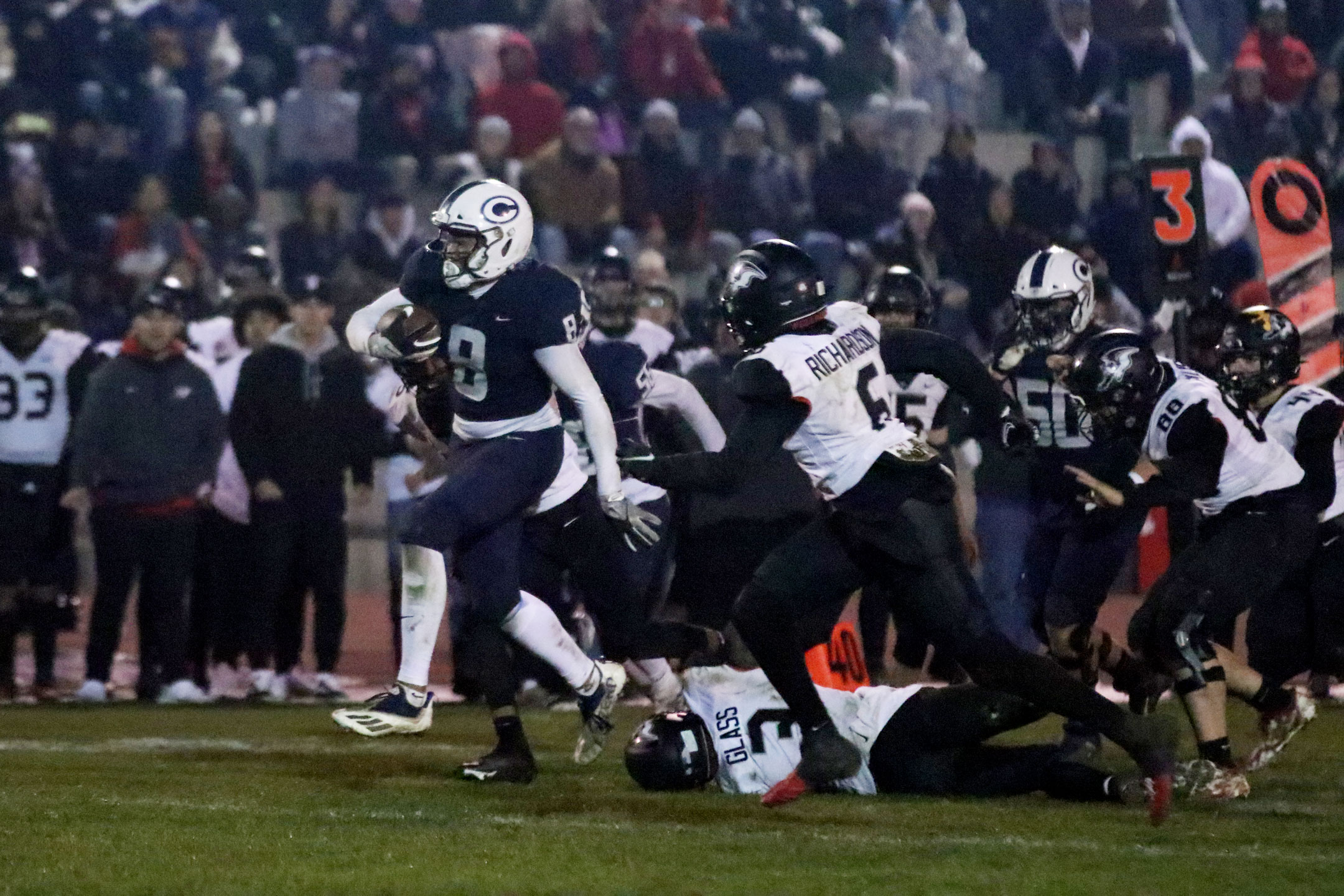 Cavalier Jaeden Moore jumps away from defenders in an attempt to run the ball. CVC held their own against the tough challenger Hanford, but pulled ahead and won 50-41.Photo by Claire Livingston

The Bullpups came back with a vengeance in the second quarter, recovering a fumble from the Cavaliers and using the opportunity the possession offered to score their first touchdown of the game. Senior lineman Erik Lamb ran the ball across the goal line, earning him his first touchdown of his career.

CVC and Hanford traded points for the rest of the quarter and the safety the Cavaliers got in the first quarter kept them ahead of the Bullpups. Hanford is known for having an incredibly fast-paced offense and CVC matched that pace. With five minutes left, the teams scored four combined touchdowns, all less than a minute apart. By halftime, the score was 29-20. 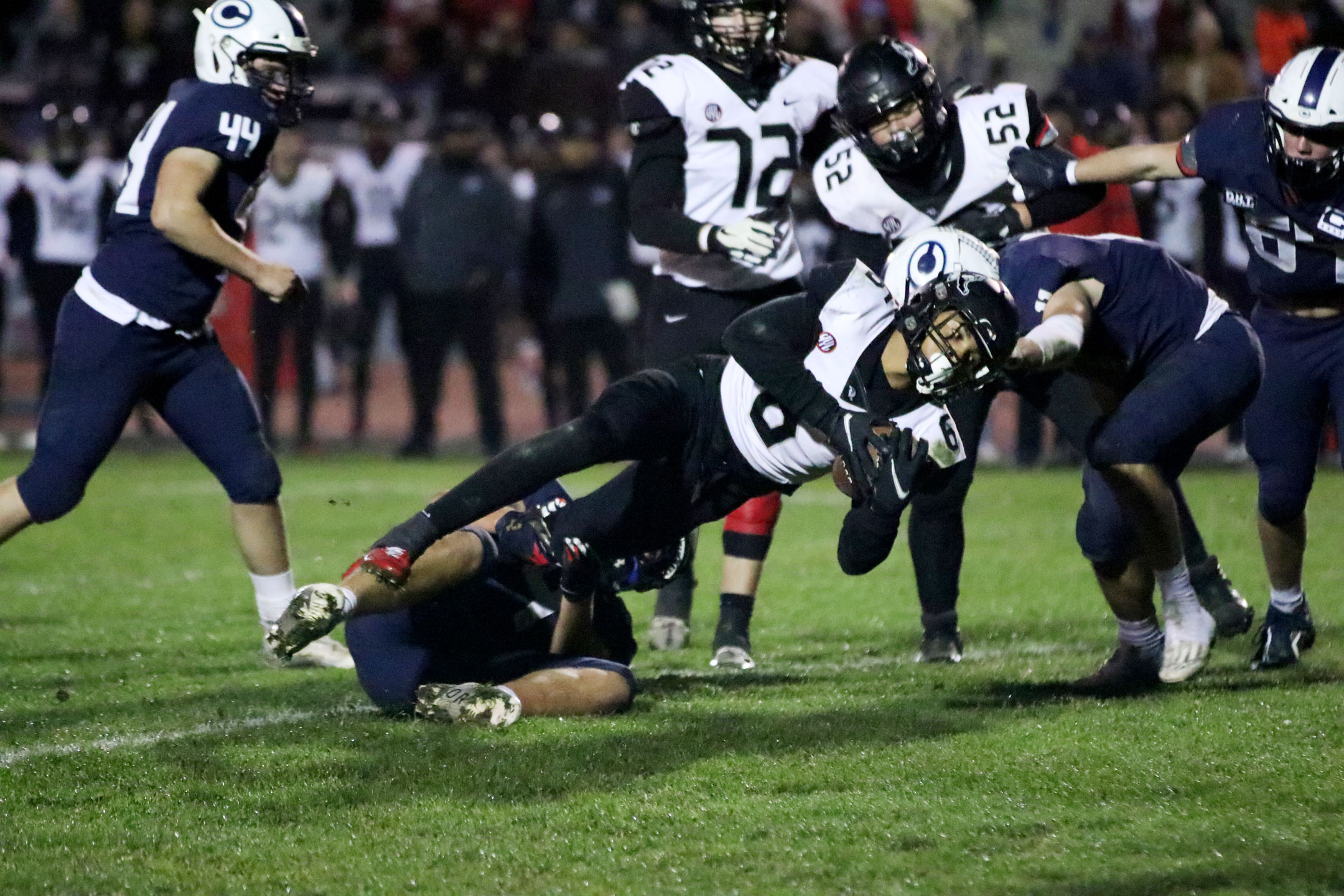 Hanford's Albert Richardson dives with the ball after being brought down by a Cavalier. The Bullpups were only two points behind CVC in the third quarter. Photo by Claire LIvingstonPhoto by Claire Livingston

45 seconds into the fourth, the Cavaliers scored their final touchdown of the game, a passing touchdown thrown by Donelson to senior wide receiver Chapman Dunn. Though Hanford recovered another fumble later in the quarter and scored a couple more touchdowns, they could never reach CVC’s score, finishing the game 50-41.

“It’s hard to look at 41 points and say that your defense played well,” Hughes said. “But [they really did,] it’s just [Hanford is] so good, 41 points I think is under their average.”

The Bullpups have averaged 48 points per game, not including the game against CVC. To the Cavaliers’ credit, their ability to stop Hanford’s relentless offense is their preparation with their scout team. A scout team is made up of players who do not necessarily start on offense. They watched film of Hanford and learned to play in Hanford’s style so that the CVC defense could practice against them before the game. 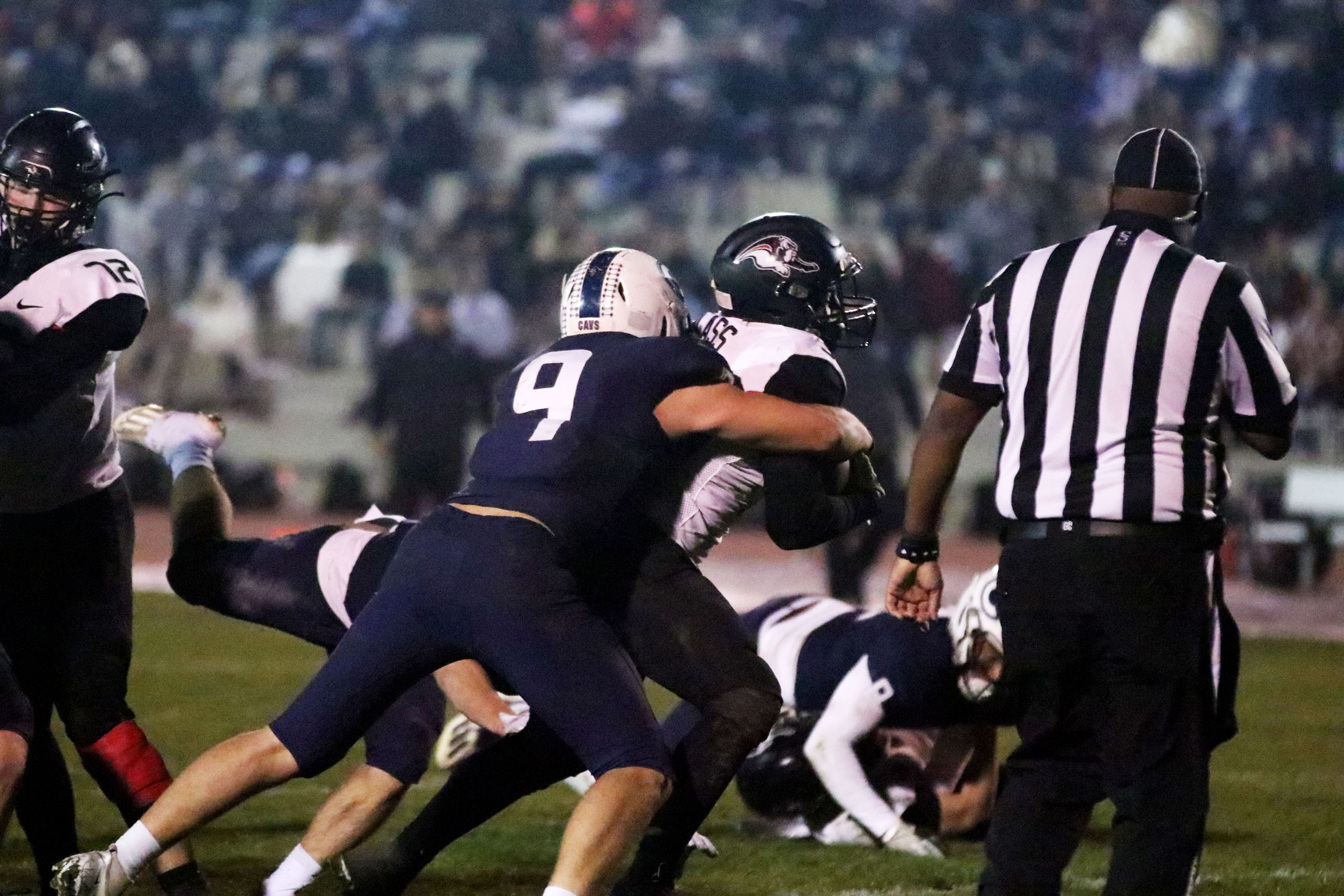 Brian Atsma, Micah Paden, Brent Kroeze and other members of the scout team may not be starting players every game, but they were essential in winning this game and getting the Cavaliers to the valley championships. According to Hughes, from the end of the last play to starting the next play, Hanford tends to snap the ball within 14 to 17 seconds. The CVC scout team averaged 17 to 18 seconds during practice.

“Those dudes played their butts off,” Hughes said of the scout team.

In the other semi-final game, the Lemoore Tigers defeated the Frontier Titans 56-21. Lemoore is not undefeated like CVC, they lost to Clovis West in non-league play this season, but they are a formidable opponent that the Cavaliers will have to work all week to prepare for. Lemoore is seeded number three in the bracket while CVC is the number one seed.

The championship game will be on Nov. 25 at Central Valley Christian.