Visalia – The Division II Valley Title game had everything fans could want. Two high scoring offenses trading touchdowns, timely interceptions and sacks on defense and special teams highs and lows. The only thing that was missing was one of the Valley’s best players – Jaeden Moore.

The 6’4”, 230-pound senior has been a big part of Central Valley Christian’s third straight appearance (excluding the 2020-21 season canceled for COVID) in the Central Section championship game. CVC’s offense didn’t miss a beat without Moore, but missed his leadership and skills on defense when it needed to slow down Lemoore’s offense as the No. 3 Tigers pulled away late to down the top-seeded and undefeated Cavaliers 62-46.

Heading into the game, Moore led the Cavaliers in sacks and receiving touchdowns, was second on the team in total touchdowns, receiving yards per game, and tackles per game. CVC head coach Mason Hughes said Moore was unable to play after getting the flu earlier in the week, which put him in the hospital and out of the championship game.

“He’s the best player in the history of this school,” CVC head coach Mason Hughes said. “All of our thoughts were with him the last few days.” 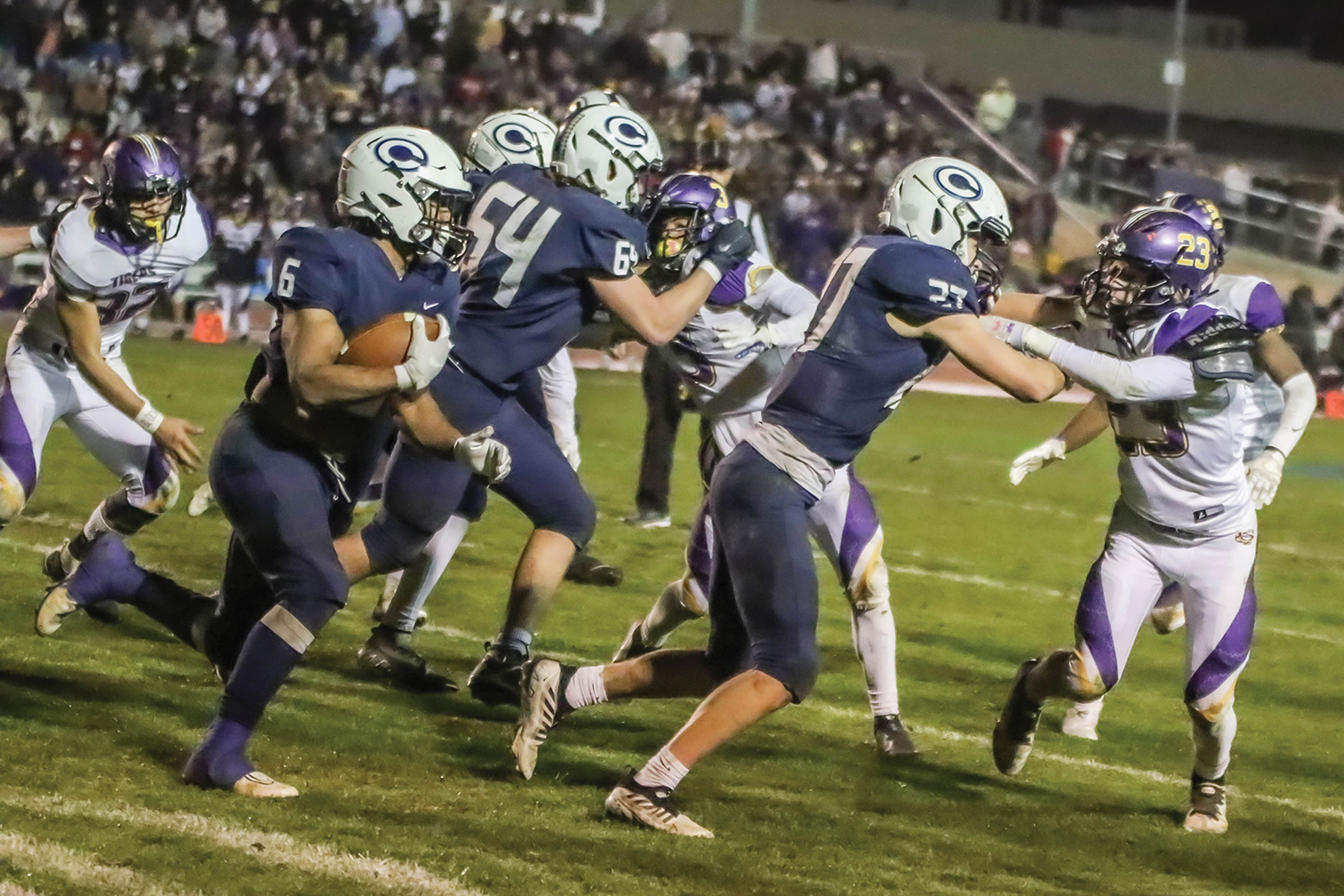 Central Valley Christian's Bryson Donelson runs the ball down the field. Donelson helped with an early lead for CVC with a 65-yard touchdown catch and run.Photo by Susi Youngs

Both teams entered the Valley Title game averaging over 40 points per game and neither offense disappointed. CVC took the early lead on a 3-yard touchdown run from Blake Gambini followed by a 65-yard touchdown catch and run by Bryson Donelson. Without Moore, Donelson was the focal point of the offense touching the ball 30 times for nearly 400 yards and four touchdowns.

CVC’s defense was solid through the first quarter and most of the first half. Lemoore’s only touchdown in the first quarter came when Kobe Green returned a kickoff 75 yards. The Tigers offensive attack finally found its footing in the second quarter. Quarterback Ty Chambers connected with Green on a 77-yard bomb with 4:32 left in the half to pull within striking distance, 21-14. With less than two minutes left in the first half, Lemoore’s Andrew Moench punched it in from the 1 yard line to tie the game at 21.

The Tigers didn’t take their first lead of the game until the third quarter, when Chambers hit Demel Turner on a slant and he outran the defense down the sideline for a 70-yard touchdown on the opening drive. CVC tied the game at 28 when Donelson shoved two defenders to the ground and broke up the middle for a 40-yard touchdown.

Lemoore regained the lead with 5:44 in the third quarter when Green caught a quick pass and found the endzone. CVC answered with another Donelson touchdown with 2:25 in the third quarter. A false start stalled the Cavaliers two-point conversion try which pushed CVC back for a long PAT try, which was blocked by Lemoore’s Gustavo Rea-huizar. That gave Lemoore a one-point lead, 35-34.

The Tigers extended their lead less than a minute later when Chambers found Preston Scott running down the opposite sideline for a 58-yard touchdown. CVC answered with a sideline bomb of their own from Max Bakker to Brandt Munger with 1:17 left in the third quarter. In an almost identical mistake, CVC was penalized for a false start on its two-point conversion. Their second attempt to tie the game was batted down in the endzone by Lemoore’s Keontre Harris in a hand fight with CVC tight end Zach Zwart. The failed conversion left CVC trailing 42-20. 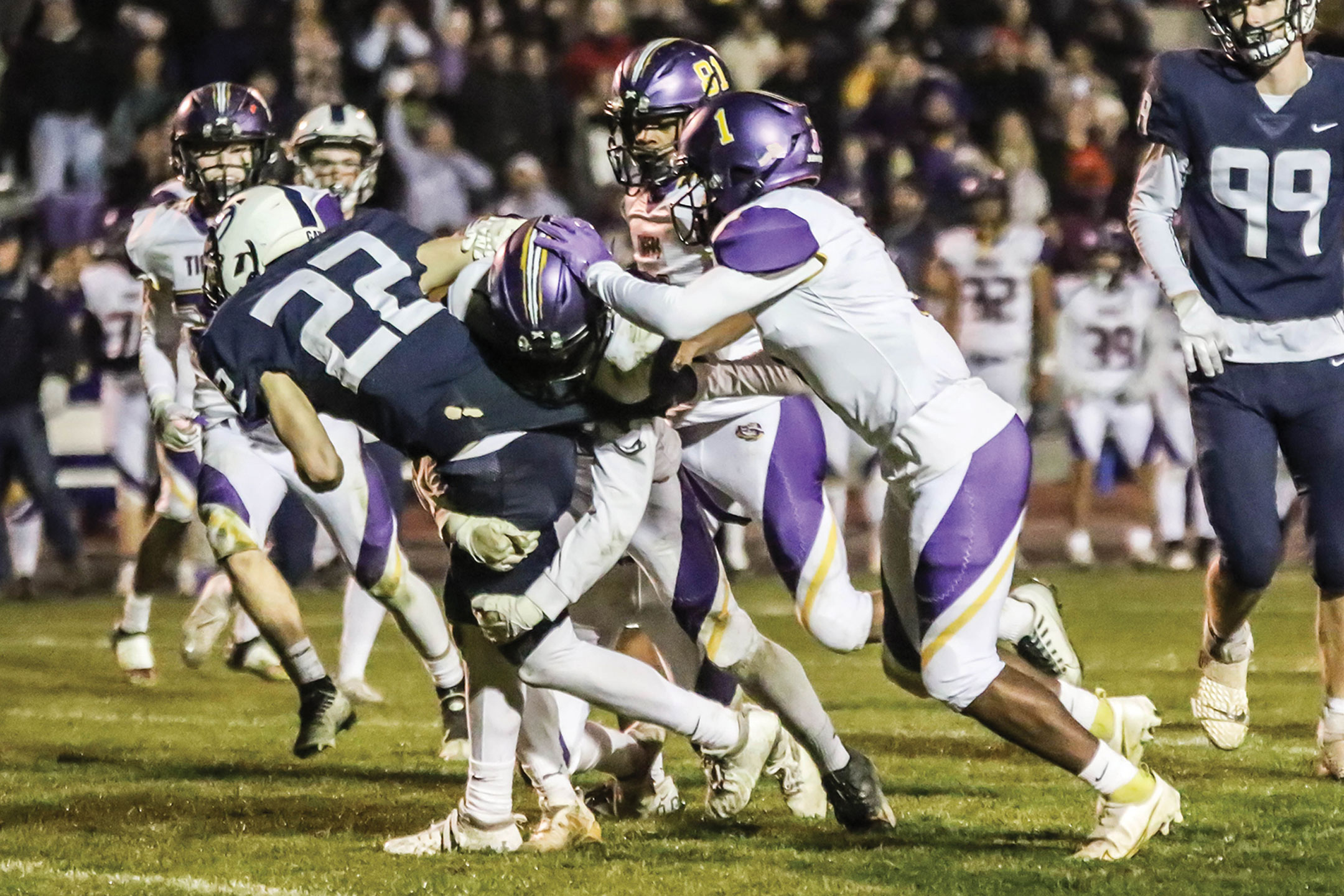 The Tigers scored a fourth, third-quarter touchdown with just 17.8 second left in the quarter when Turner took a short pass 43 yards for a touchdown.

“We just couldn’t stop them on defense and their offense was amazing tonight,” Hughes said. “For whatever reason, we couldn’t defend the pass.”

Down by two scores entering the fourth quarter, CVC’s hopes of a third Valley Title in five years hinged on the defense’s ability to stop the hot Tigers offense. Trailing CVC 56-46 with under 7 minutes left in the game, the Cavaliers defense gave the Tigers three first downs on penalties, including a crucial third and ten. Lemoore would eventually score on the drive, and put the game out of reach, on an Andrew Moench touchdown run. The score sealed the 62-46 win for the Tigers.

For CVC, the loss was difficult because it came without their best player but also ended the high school careers of seniors who missed an entire season due to COVID. It also marked the fifth straight Valley Title game appearance for CVC, which won the championship in 2018-19 and 2021-22.