EXETER – The Exeter boys’ soccer team pulled off a 2-1 win over the Woodlake Tigers for their fourth win in a row, remaining undefeated so far this season.

Both teams had trouble settling the ball down in the first half, which was marked by long aerial kicks back and forth across the field. Sometimes the teams would head the ball back and forth three or four times in a row instead of settling it on the ground to open up shots on goal. However, despite the Monarchs not playing up to their standards, they still pulled off a 2-1 win.

“We got out of whack this game actually,” Exeter head coach Pete Renteria said. “We played their kind of game. We had a lot of long balls. In a lot of games past we had a lot of touches. So we didn’t play our best game tonight.” 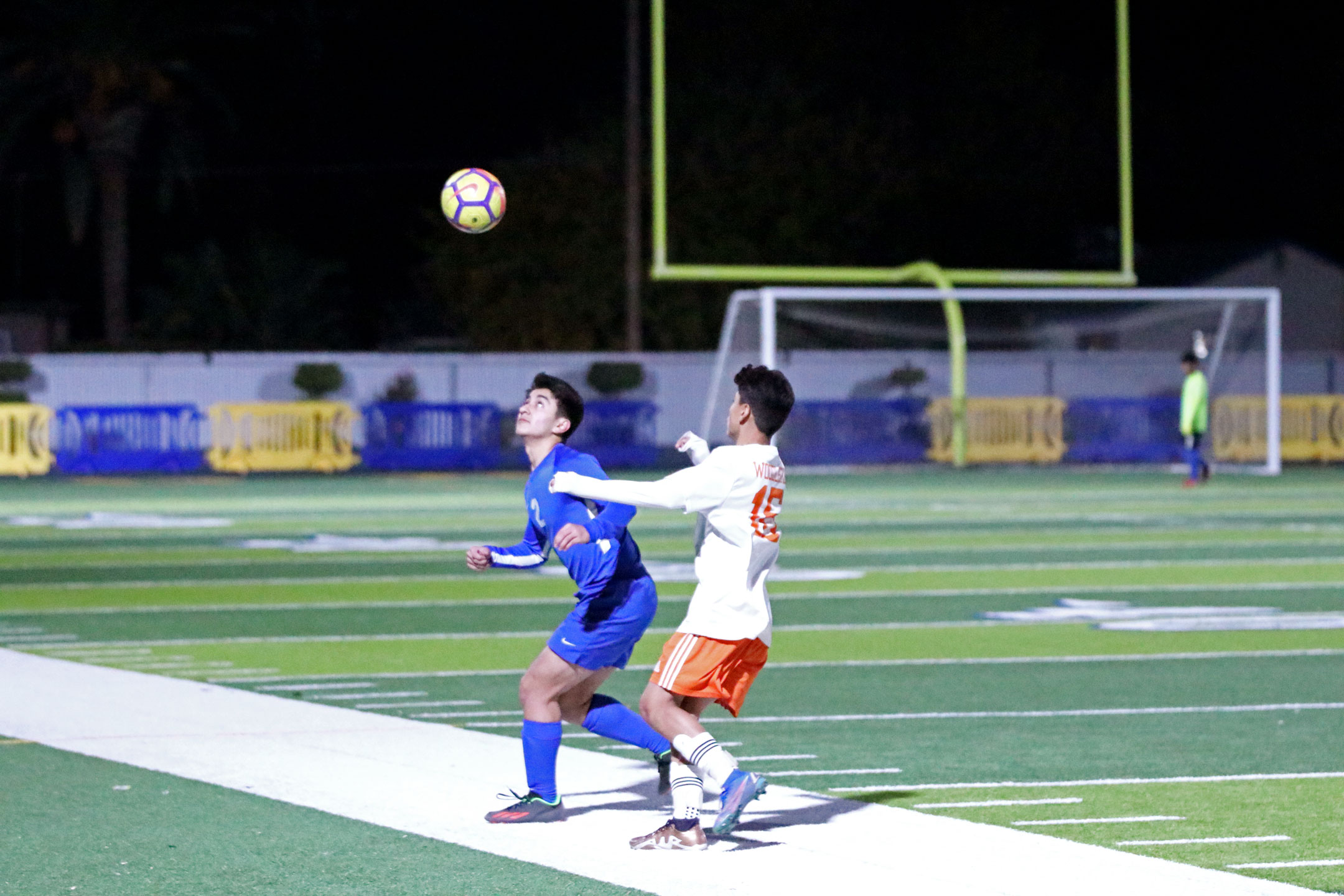 Jonathon Jauregui takes a header away from a Woodlake Tiger during a 2-1 win on Wednesday, Nov. 30. Photo by Claire Livingston

All three goals of the game happened within a four minute window at the end of the first half. Senior Eduardo Ramirez opened up the game for Exeter with the first goal, followed almost immediately by a goal by Woodlake. Exeter substituted their starting goalie after he struggled with handling some of the shots by Woodlake. Senior Brian Martinez finished up the first half with another goal for Exeter, sending it sailing over the Woodlake goalkeeper’s outstretched hands.

In the second half, Woodlake played much better. They settled the ball down and were able to open up the middle and get more shots on goal. Unfortunately, they didn’t execute the chances they had against Exeter’s starting goalie that was struggling with the ball in the first half and were unable to score on the backup in the second half. 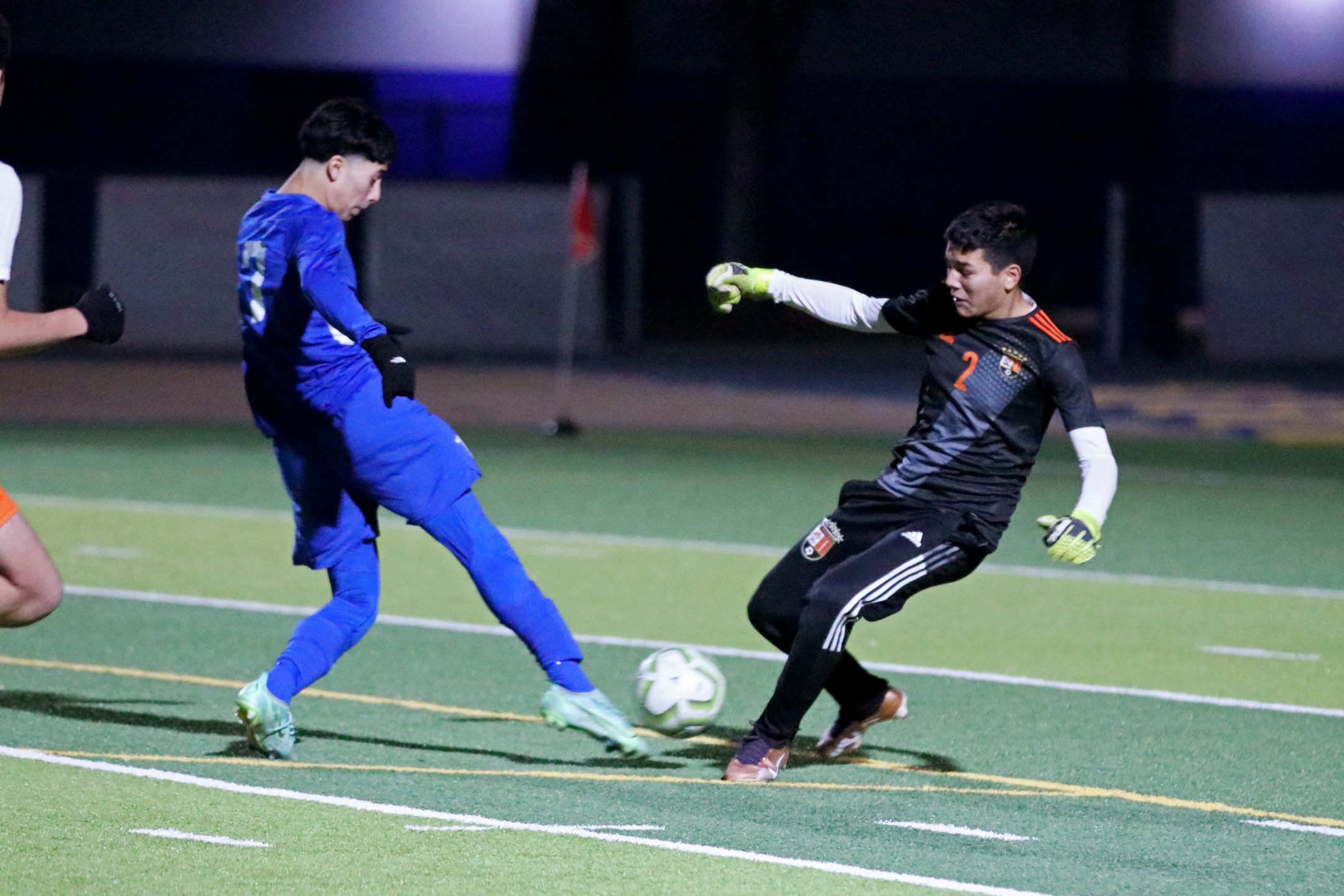 Woodlake's goalie stops a third goal from going through the net during a 2-1 loss to Exeter on the road at Monarch Stadium. Photo by Claire Livingston

“It seemed like the second half they kind of got frustrated and just went away from our game plan,” Woodlake head coach Paul Delgado said. “We’re very young, we’re competitive, but we make silly mistakes.”

According to Delgado, the Tigers lost seven seniors to graduation last year and currently have six freshmen on varsity. For a young team, they’re rebuilding, but there’s always potential when there are young players on a team. They work hard and train with intensity. Though their record is 1-4-1 so far, they’re working hard to get ready for league play.

The Woodlake Tigers will play in a tournament beginning Dec. 2. They will face Golden Valley, Tulare Western and Sunnyside.

The Monarchs are beginning the season with a great record and Renteria attributes it to his team’s “grit.” Even though they were up 2-1, they played hard for the entire second half to make sure they kept their lead. Nothing is quite as precarious as a one-point lead in soccer.

“We’re about a team here,” Renteria said. “The boys have grit and grit is real for them. They have it.”

The Monarchs will face Orange Cove at home on Dec. 2.