GIRLS BASKETBALL: Spartans beat the buzzer and the Mustangs

TULARE – The Strathmore Spartans pulled off a 28-27 comeback against the Tulare Western Mustangs to secure their first win of the season.

The Spartans were down by six points heading into the fourth quarter. Utilizing a full court press, they held the Mustangs back while working to pull ahead. With four minutes left, the teams were tied at 21 and Tulare Western was struggling to even get on offense with the Spartan defense pressing them. The Mustangs briefly pulled ahead, but with less than 20 seconds remaining, the Spartans scored one final basket to finish off their comeback story.

“I knew that [the full court press] was probably our only way to stay in this game,” Strathmore head coach Richard Miranda said. “I’m proud that they stuck with it defensively.”

The Spartans held the Mustangs in a full court press from the beginning of the game, which held the game at a low score. At the end of the first quarter, each team had only one basket each. But at halftime, the Spartans were up by one point. The Mustangs didn’t pull ahead until the third quarter. 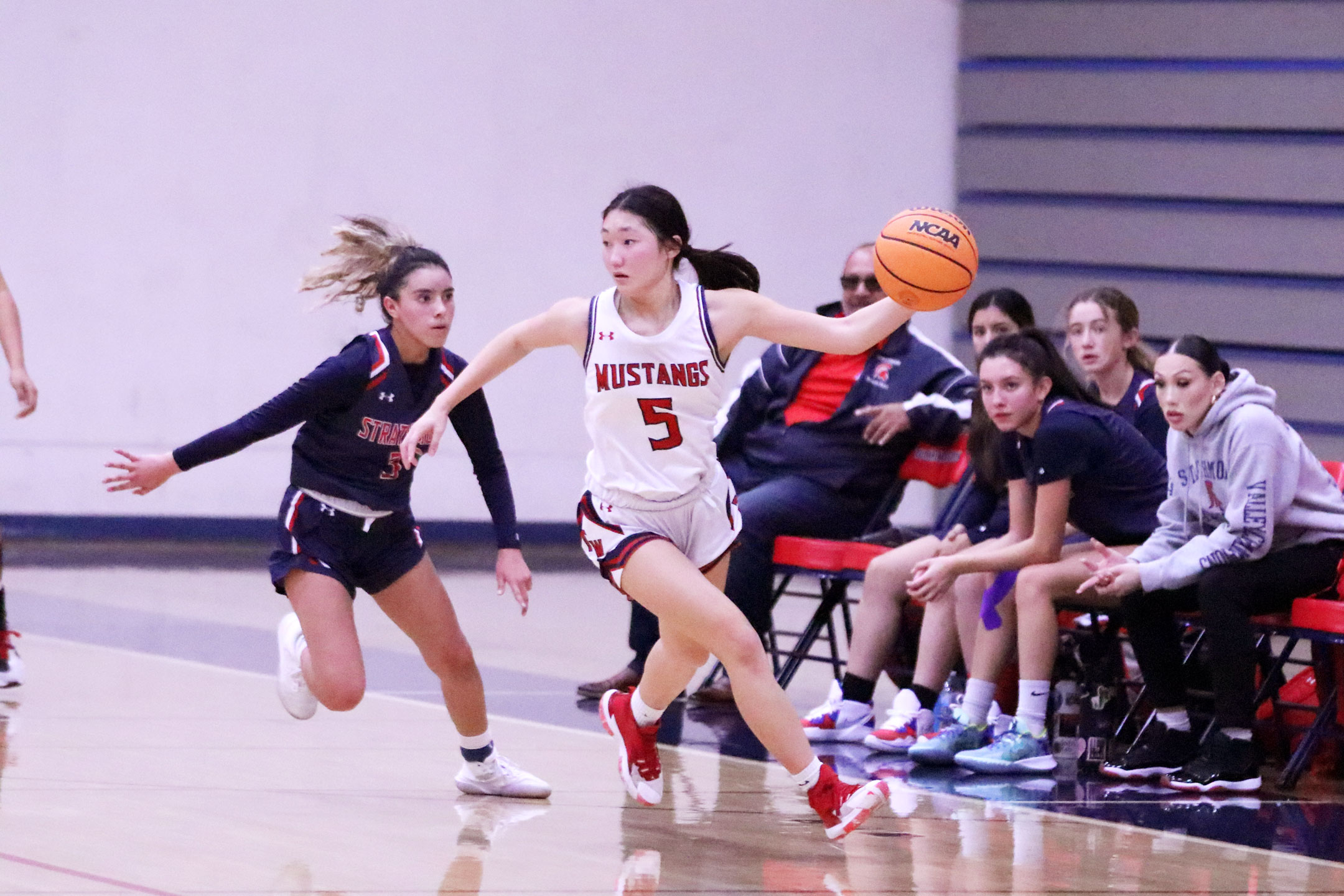 Tulare Western's Adison Lee dribbles down the court in front of the home team bench during a buzzer beater loss on Thursday, Dec. 2. Photo by Claire Livingston

Senior point guard Alexis Ibarra was a leader for the Spartans throughout the game. With a varsity roster of only eight players, Ibarra played the entire game. Her aggression on defense forced the Mustangs to pass their way all the way up the court and any mistakes were an opportunity for the Spartans to steal the ball and score on a breakaway.

“She’s the one that’s keeping us going,” Miranda said. “I think she knows what it takes.”

Playing a full court press defense can be exhausting for both teams because there’s no time to catch a breath while switching between offense and defense. During the fourth quarter, the Spartans were even more aggressive, which forced the Mustangs to commit more mistakes and foul more often, allowing Strathmore to pull ahead. 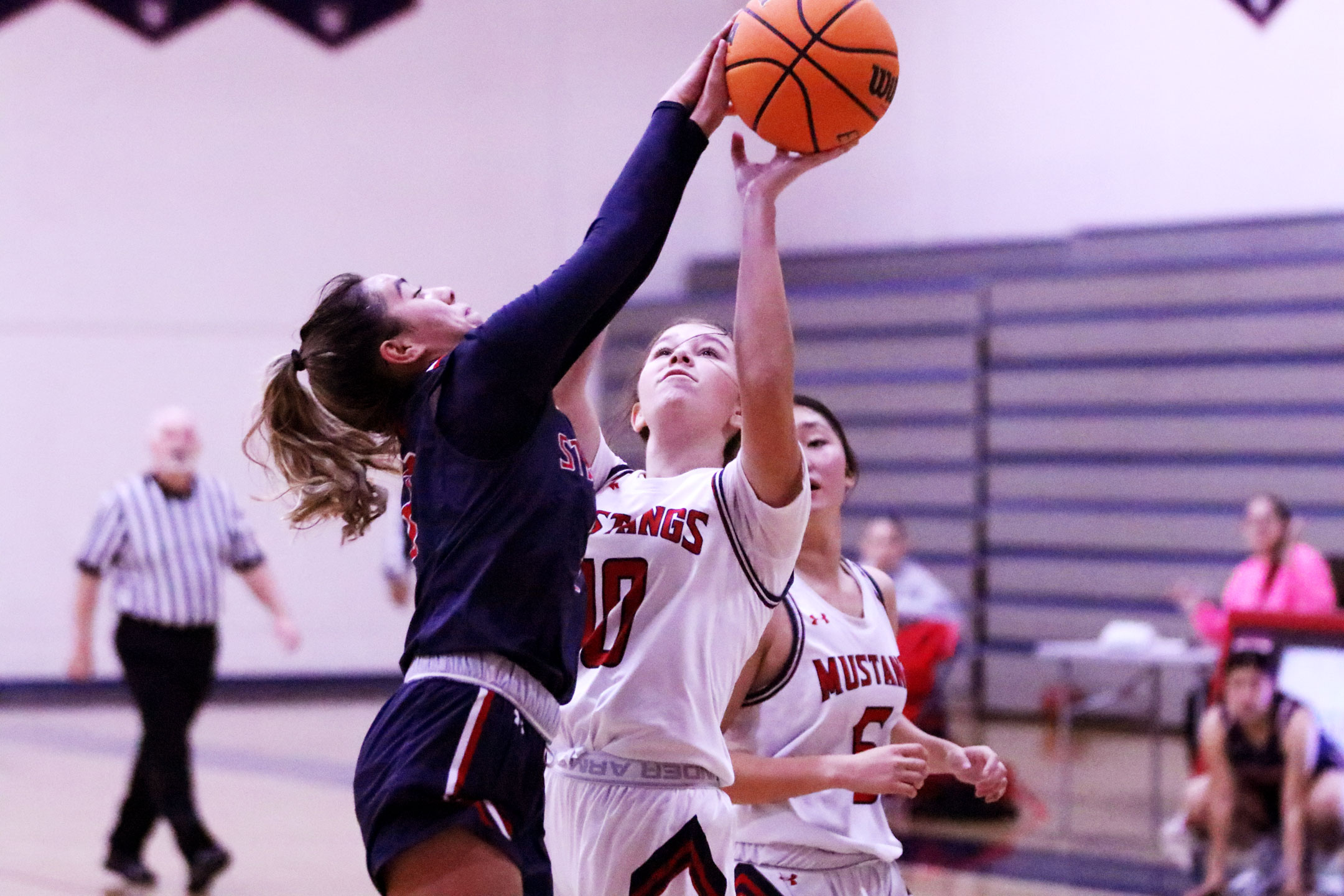 Strathmore's Alexis Ibarra blocks a lay up from Tulare Western in Tulare. Photo by Claire Livingston

The home crowd thought they would get a win when the Mustangs put up a three-pointer with 30 seconds left, but the Spartans only needed one basket to pull ahead, which they got with 20 seconds remaining. They held the Mustangs as the clock ticked down. There was little celebration other than high fives for the eight exhausted varsity players, but they headed home with their first win of the season.

“We didn’t [have a strategy],” Tulare Western head coach Jeff Denney said. “We pretty much just panicked. They out played us and out hustled us in every aspect of the game.”

The Tulare Western Mustangs will face Selma at home on Dec. 6.

The Strathmore Spartans may not have a big team, but they have potential and grit. Between leadership from their captain, Ibarra, who has been on varsity since she was a freshman, and their coach, they’re hoping to pull off a winning record this season.

The Spartans will face Granite Hills at home on Dec. 8.