The Farmersville Aztecs beat the Exeter Monarchs 3-0 on Thursday, Dec. 8 to retain the Chuy Cup and bragging rights

FARMERSVILLE – The Farmersville Aztecs shut out the Exeter Monarchs 3-0 to take home the Chuy Cup.

In the twelve year old rivalry between the Farmersville and Exeter boys’ soccer teams, the Farmersville Aztecs took home the Chuy Cup for the second year in a row after 80 minutes of intense play. The Aztec offense put three goals on the board while the defense shut down the Monarch offense entirely. This is the first shutout victory in the rivalry since 2019.

“Exeter is a great team,” Farmersville head coach Michael Jordan said. “Their speed was tearing us up, they’re well coached, their defense was solid. They were creating a lot of problems for us.”

It took just over 20 minutes for the Aztecs to score their first goal. Kevin Bustamante broke past the Monarch defenders and made it past goalkeeper Benjamin Jimenez Lopez to easily put the ball in the net. In the second half, the Monarchs subbed their goalie, but it didn’t help. The second goal came off a penalty kick. Bustamante found a third opportunity and put the ball away for a third time, making it a 3-0 game. 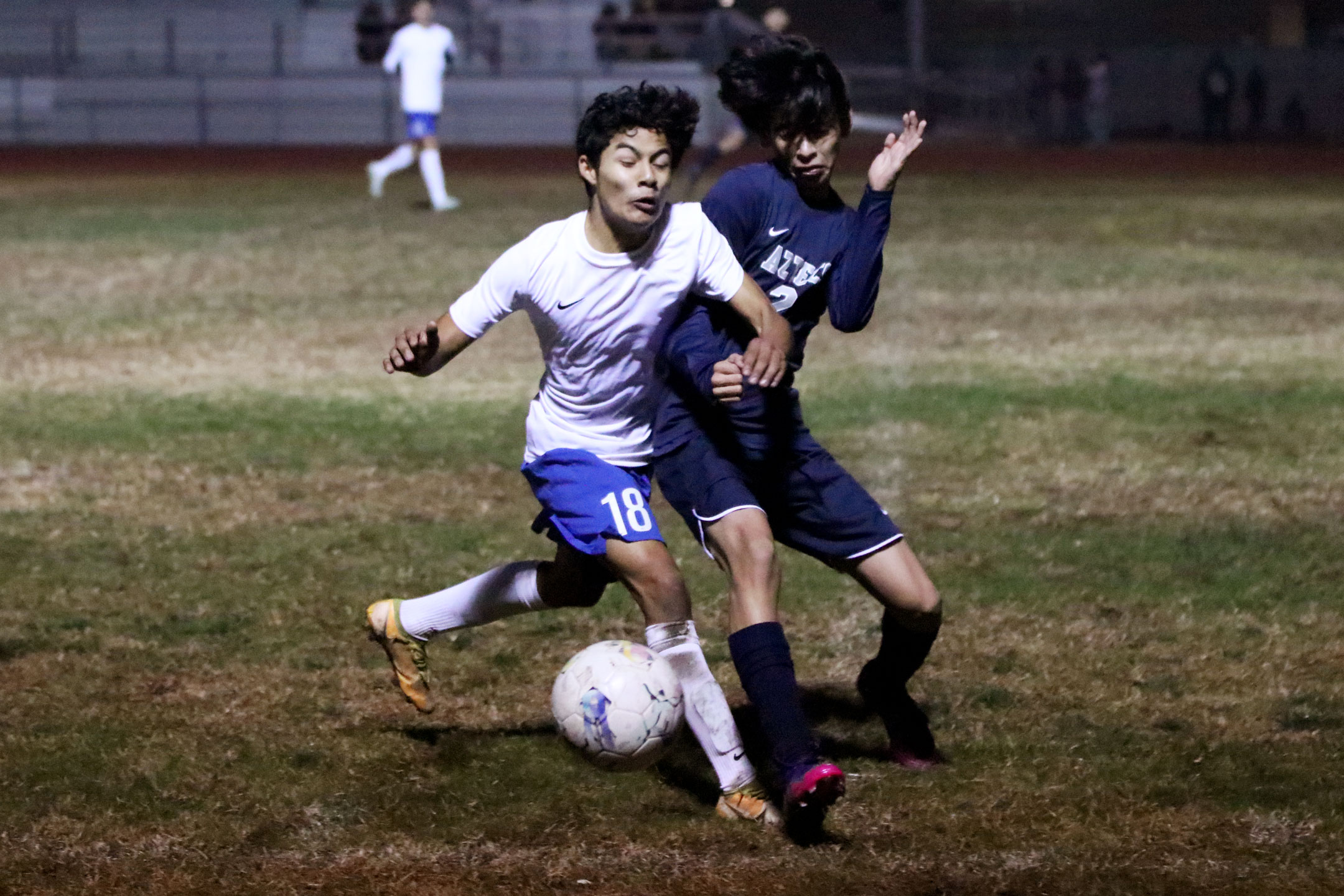 An Exeter and Farmersville player collide while fighting for the ball at mid field during the Dec. 8 Chuy Cup. Photo by Claire Livingston

The scoreboard may make it seem as if the Aztecs had an easy game, but like Jordan said, the Monarchs created a challenge. Exeter was the faster team, so Farmersville had to adapt. They employed a stopper-sweeper defensive formation. In this formation, one “sweeper” defender plays back behind one or two others as a last line of defense before the goalie.

“We started the year with a flat four but that wasn’t working for us,” Jordan said. “We went old school with stopper-sweeper because we don’t have a lot of team speed. We have a solid keeper that allows us to make mistakes because he cleans up a lot of messes for us.” 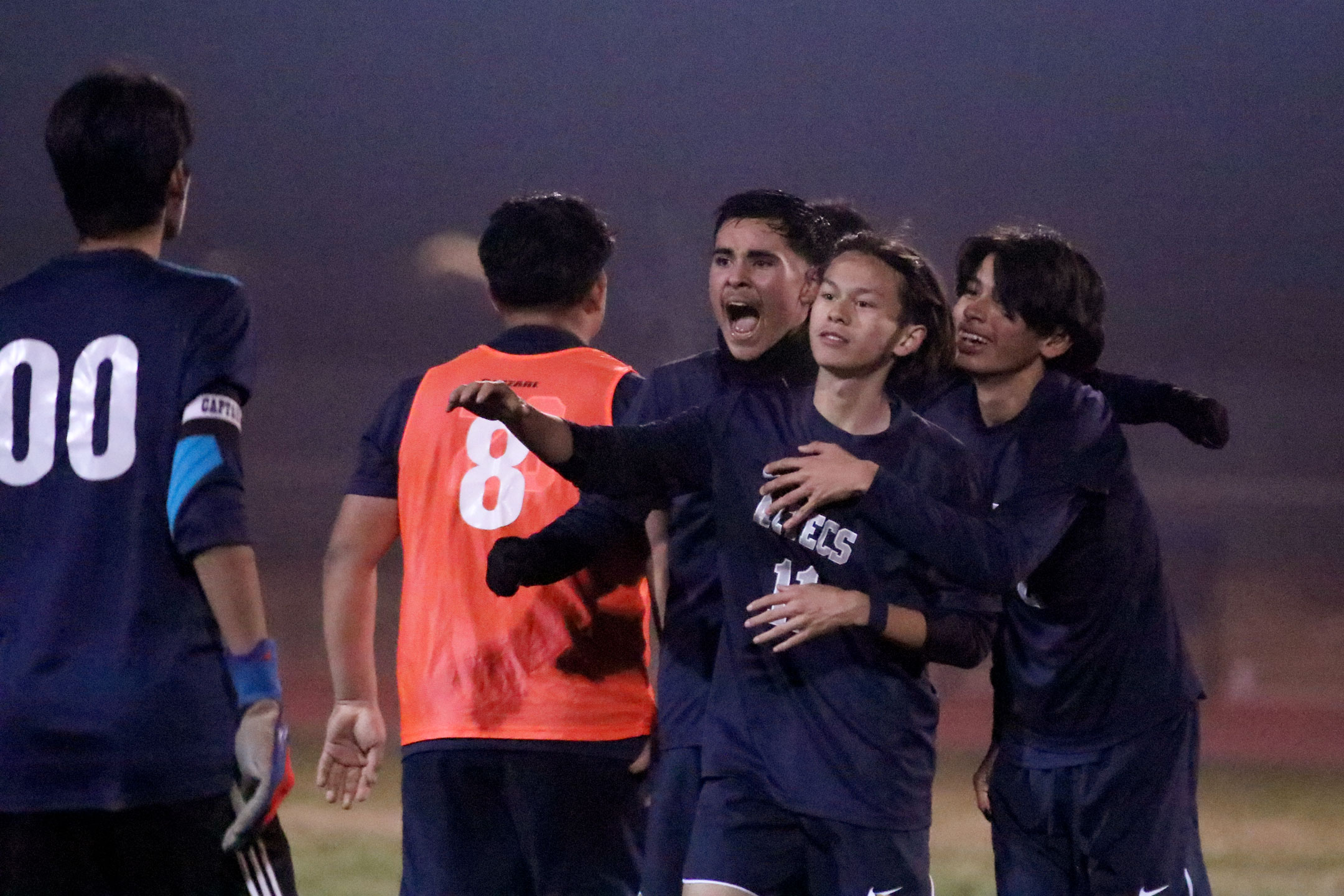 Farmersville celebrates one of their three goals on the way to a 3-0 shutout win over Exeter. Photo by Claire Livingston

Farmersville’s goalkeeper shutout the Exeter offense entirely, despite their aggression at the goal. Though much of the game kept both teams tangled up in the midfield, the Monarchs were unable to break through the Aztecs’ multi-layer defense. At any opportunity, they couldn’t seem to get a shot past the Aztec goalie, who made it seem as easy to stop the Monarchs as if he was blocking a hockey net instead of a soccer net.

After the win, Farmersville was awarded the Chuy Cup trophy to keep until next year. The two teams gathered in the center of the field to come together and remember the person the Chuy Cup is named after: Jesus ‘Chuy’ Banuelos.

Banuelos was from Exeter, but he married a woman from Farmersville. He taught Spanish and physical education and coached varsity soccer, fondly called “Coach B” by the students and athletes he mentored. His passion was sports, and he played baseball, football and basketball for the Monarchs. He was also an assistant baseball and football coach.

12 years ago, the community said goodbye to Banuelos after he lost a long battle with cancer. The Chuy Cup was created to honor him during the game between Exeter and Farmersville every year. Though many current players would have been too young to know Banuelos personally, Jordan makes sure to keep the memory of his friend and long-time rival alive by telling the players who participate in the Chuy Cup about Banuelos after the game.

“He was a great coach, but he was a better human being,” Jordan said. “We all miss him. That’s why we got this started.”