SOCCER: Rangers take down the Tribe

In one of their final games of the year, the Redwood Rangers traveled to Tulare and took on the Tulare Union Tribe. The Rangers offense came out strong, putting up three goals in the first half and two in the second. The defense held the Tribe to only one goal, scored in the final ten minutes of the game. Even after playing nine games in the last twelve days, the Rangers pulled off a 5-1 win.

“We just want to keep improving,” Redwood head coach Jason Vieira said. “Go into our league firing on all cylinders and hopefully make a run in the playoffs.”

Redwood dominated possession of the ball in the first half. Freshman forward Avery Yagle scored her first goal within only eight minutes and that set the tone for the game. The Union defense scrambled to keep up with the rigorous pace set by the Redwood offense, who were able to set up Yagle with a centering pass for her to shoot the ball over the Union goalie’s head. 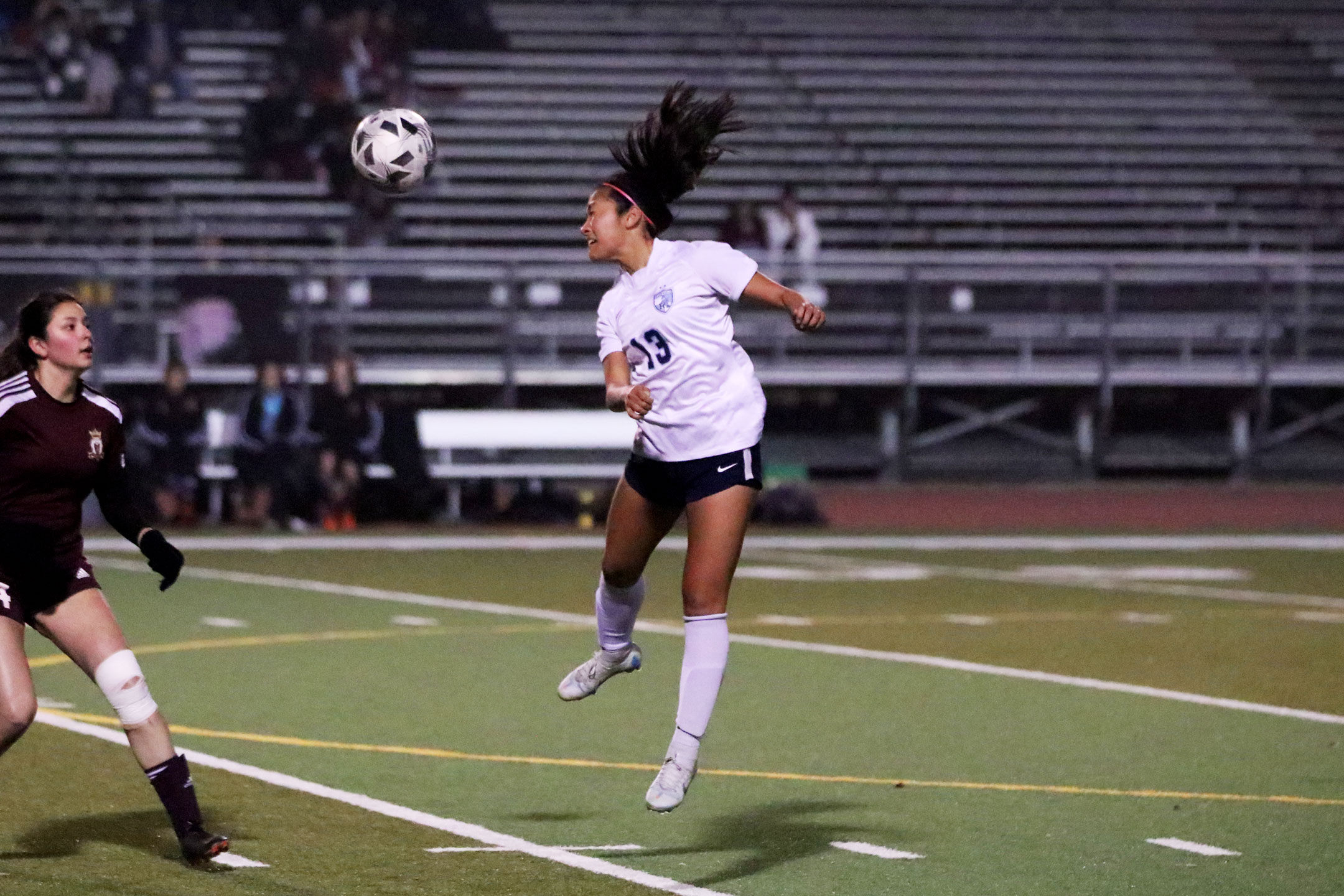 Leah See hits a header toward the Tulare Union goal during a winning effort on Tuesday, Dec. 20. Photo by Claire Livingston

Yagle put the second goal in the net for Redwood on a penalty shot after a Union player was called for a handball inside the goalie box, putting Redwood up 2-0 within 15 minutes of the starting whistle. Captain Ellie Gilbert, a midfielder, scored Redwood’s third goal just before the 30 minute mark.

Redwood’s defense played a huge part in their offensive success. Captain Alyssa Hernandez, a junior, plays at the center of the defense. Part of Redwood’s defensive strategy is never letting the ball get past Hernandez, but the other part is using the defensive wall to help regroup the offense.

“The players on the outside have really done a great job holding that back line with the girls in the middle,” Vieira said. “But then we also use [the midfielders] in the attack a lot also.”

Vieira highlighted senior midfielder Jocelyn Arellano for her skill on the attack from the midfield. Redwood’s offensive strategy involves a lot of passing between the forwards and the midfielders, sometimes bouncing it off the defense to keep it away from the opposing team. It makes it seem as if they have more than eleven players on the field.

In the second half, Redwood pulled some of their starters to rest them and allow the second string to gain experience. Senior forward Natalie McDonnell scored eleven minutes in, putting Redwood up 4-0 before Union finally scored. Sophomore Summer Miller scored the Tribe’s only goal of the game on a breakaway. She sent it sailing over the Redwood goalie’s outstretched fingers with a shot worthy of David Beckham.

Redwood scored their final goal with only six minutes remaining on the clock. Junior forward Payten Ball scored on Union’s backup goalie, who came in for the second half. The Redwood offense kept up their press until the end of the game.

“Everything’s going according to the blueprint,” Vieira said. “We have injuries like everyone has injuries but they haven’t really stopped our progress in our growth as a team.”

Non-league play allows teams to develop their chemistry and strategy as players. Redwood is often one of the tougher teams on the schedule during non-league play. So for Redwood to gain experience, they went out of Tulare County to play competitive teams in Tracy and Concord.

For their final game of 2022, Redwood will face Bullard at home on Dec. 28. For Tulare Union, they won’t face another team until after the new year, when they will play Central Valley Christian on Jan. 6.