The Lindsay boys’ basketball team pull off a 61-55 win over the Exeter Monarchs for their tenth win of the season; Lindsay girls win by 19 points

EXETER – The Lindsay Cardinals defeated the Exeter Monarchs in a close matchup that ended in a score of 61-55.

“We had some moments where there’s been some adversity but at the end of the game, we’re able to focus, and we’re able to close out games,” Lindsay head coach Frank Morin said.

The first half of the game was close in points, both teams staying within a basket or two of each other as the ball traveled quickly up and down the court. The Cardinals and the Monarchs were generally an even matchup, but the Cardinals stayed ahead at key moments. Though Exeter was up at the half, the Cardinals put up the defense necessary to stop them in the second, while recognizing the Monarch’s defensive weaknesses. 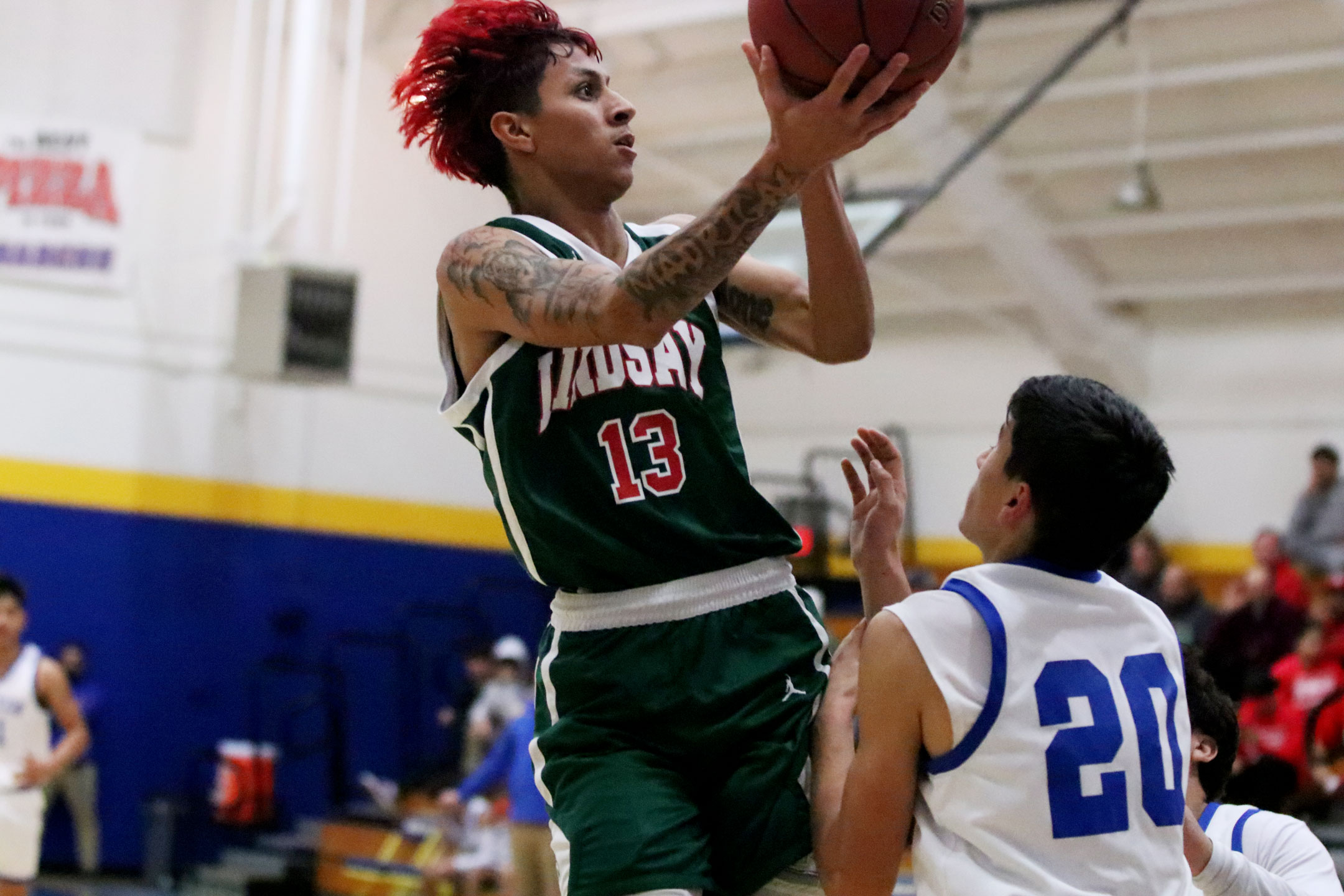 Lindsay's Sebastian Madrigal pulls up over an Exeter Monarch during a 61-55 early season win. Photo by Claire Livingston

“We recognize the fact that Exeter didn’t have anybody at the rim to protect the rim. That was our best case scenario to get some points,” Morin said. “We went right to Aiden Sanchez and he answered the bell and he went right to the rack and got us a basket in some key moments.”

Sanchez, a senior guard, led the Cardinals in points, scoring eight baskets and making four out of five free throws. He also had one three-pointer in the first quarter. Following Sanchez in points was senior guard Sebastian Madrigal with four baskets and four out of five free throws. Madrigal led the Cardinal offense, directing the other players into position and moving the ball easily through the Exeter defense.

Despite the loss, Exeter played well and kept up with the Cardinals, providing a strong challenge for Lindsay. It was a few mistakes towards the end, missed layups, turnovers and fouls, that cost the Monarchs the win. Two three point shots would have tied the game and sent it to overtime, they just couldn’t seem to organize the offense.

“We made some mistakes towards the end of the game that kind of cost us but we played pretty well,” Exeter head coach Eli Garver said.

Despite the loss, Garver says that the Monarchs are coming together as a team as they prepare for league play. So far the Monarchs are 7-7, but most of their losses have been to higher division schools. Exeter is in one of the toughest leagues in the valley, facing teams like Central Valley Christian, Sierra Pacific and Selma. The Monarchs only have two non-league games left before facing their first league opponent. They will face Mission Oak at home on Jan. 3. 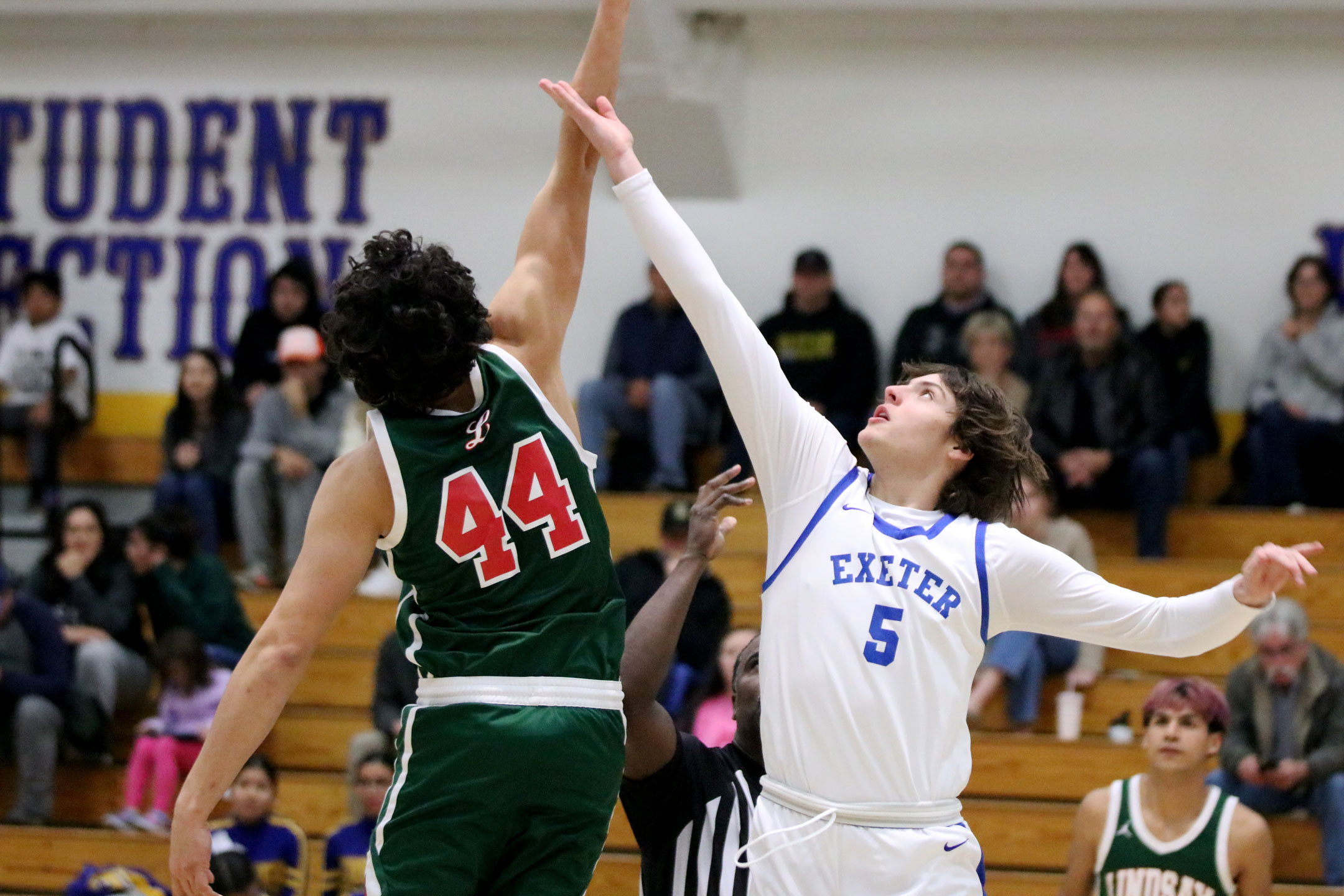 Lindsay and Exeter tip off at the half. Photo by Claire Livingston

The Cardinals are 10-2, which is the best non-league record of any team in the new East Sequoia League. Made up mostly of upperclassmen, the Cardinals are experienced and prepared for new opponents. They already faced two league opponents, Woodlake in a regular game and Corcoran in a tournament, and won both. They will play in a tournament against Valley Christian Academy, Santa Maria and Taft beginning on Dec. 27.

The Lindsay girls’ basketball team took down the Exeter Monarchs in a 37-18 defeat. The Cardinals were up first and kept the lead throughout the game. It was a low scoring, mostly defensive game. On offense, the Cardinals worked together as a team to pass the ball around Exeter’s defense.

I think there’s a difference in the team when they do play together and when they don’t,” Lindsay head coach David Nucum said. “We’re led by some kids that do play a lot of basketball and love the game.”

One of those leaders is Jaden Perez, a junior who plays small forward. She had a couple of turnovers early in the game but settled down and got her confidence as the game progressed, putting up several baskets for the Cardinals. But other players who maybe didn’t put up as many points contributed just as much, looking for open players as the team has worked on heading into league play.

Lindsay had a tournament on Dec. 27 where they will face Hanford first. After the new year, they will begin league play on Jan. 6 against Farmersville.

Exeter will also play in a tournament on Dec. 27, facing Mission Prep. League play will begin for the Monarchs on Jan. 10 against Reedley.