FARMERSVILLE – The Farmersville Aztecs defeated the Strathmore Spartans for the first time in five years with a score of 54-30.

After five years of losses, the Aztecs came out strong against the Spartans, taking the lead and keeping it throughout the entire game. They played a dominant press that kept them in control of the ball. Their speed and ball control left the Spartans scrambling. Between turnovers and breakaways, the Aztecs were simply uncatchable as they ran away with the score, finally defeating the Spartans 54-30.

“We’ve told the girls these last couple of days that they’re writing their own history here,” Farmersville assistant coach Mercedes Rosales said. “We didn’t really do too many things that were different for this game.  It was like, just keep capitalizing on the history that you’re making.”

The Farmersville girls’ basketball team has a record of 15-2 as of their win over Strathmore. They’ve already won as many games as the team did last season before league play has even begun. The team has a lot of young talent, including freshman Jazmaine Stewart and sophomore Janessa Garza. 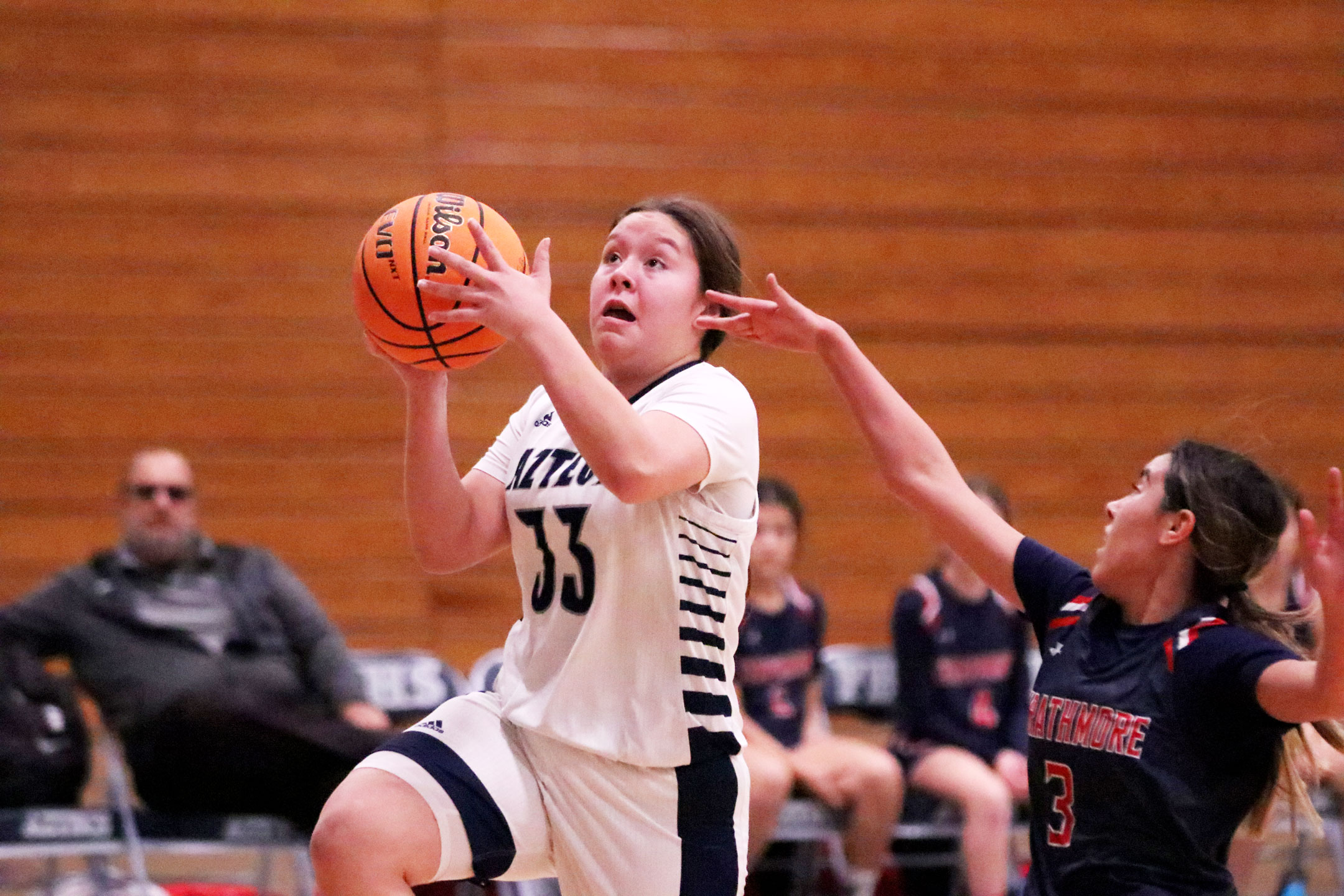 Farmersville sophomore Janessa Garza goes for a lay up while a Strathmore player makes an attempt to stop her. Garza is one of the younger players on the team and as a sophomore she is one of the team captains.Photo by Claire Livingston

Stewart and Garza led the team in points with 15 and 17 respectively with Stewart netting four out of six free throws. Garza plays point guard, running the offense and bringing the ball in, while Stewart is there ready to sneak through the defense and make the shot. Both Garza and Stewart made impressive steals from the Spartans while on defense, often leading to breakaway points.

“A freshman and a sophomore are leading our team so we’re excited,” Farmersville head coach Antonio Juarez said.

Garza played on varsity as a freshman and is now one of the team’s captains as a sophomore and Stewart is a freshman with a lot of talent. But it isn’t just Garza and Stewart making moves for the Aztecs. Many of the players also played on Farmersville’s volleyball team, who just completed a historic playoff run, winning league in volleyball for the first time in school history. That chemistry and bond has carried over to the basketball court.

Farmersville has a group of girls who are fully dedicated and passionate about the sports they pursue and genuinely want to get better not just for themselves but for their teammates. Their friendship outside of basketball translates to chemistry on the court. 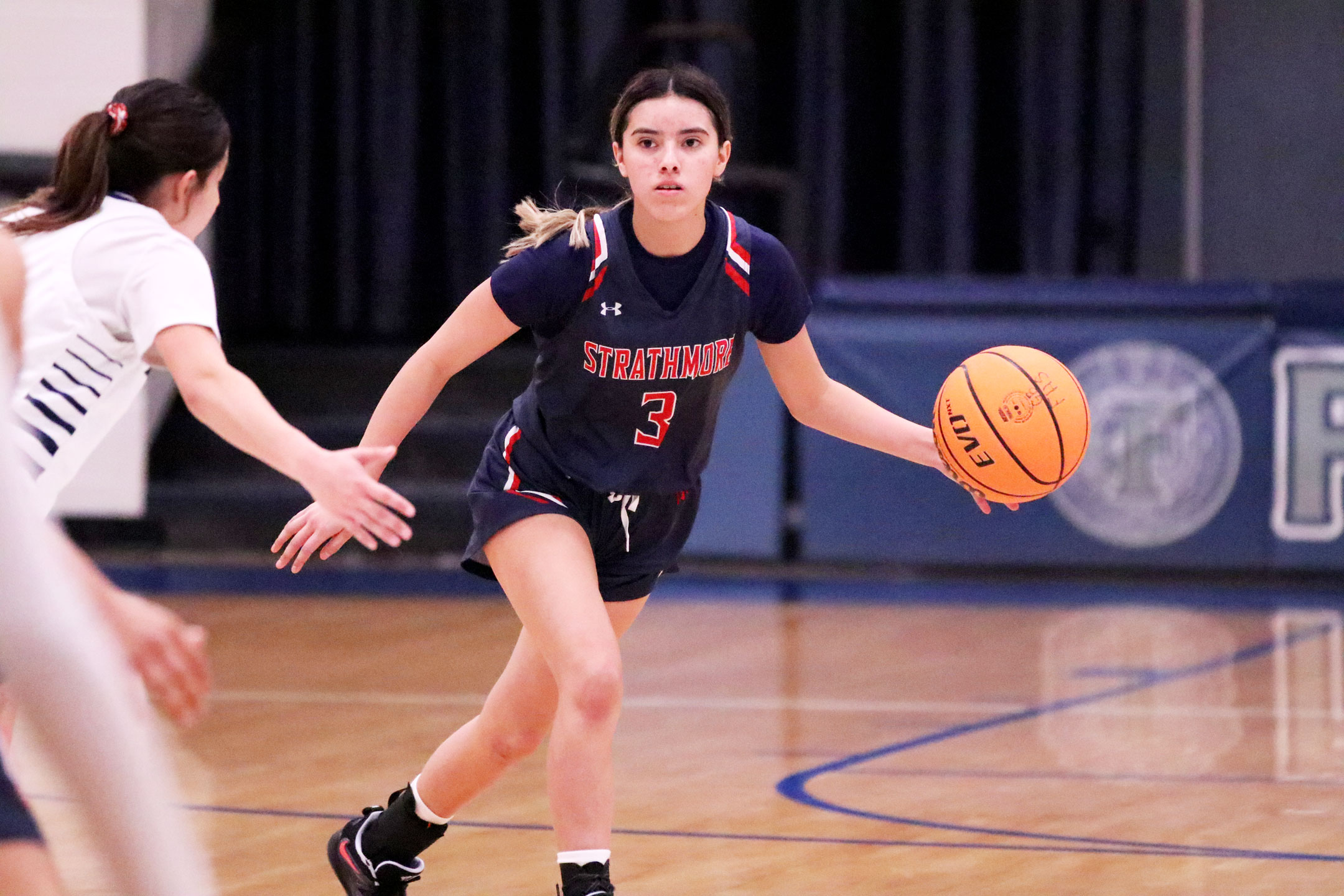 When they play, it seems as if there are more than five players on the court somehow with the way they can seamlessly and quickly move around to double cover the ball carrier, boxing her into a corner so she has no way out while committing minimal fouls. The Aztecs work as a team to systematically break down their opponents, which is similar to how the Farmersville volleyball team charged their way to the semifinals of the valley playoffs earlier this school year. Their play simply discourages opponents.

“I don’t know why we couldn’t handle their press,” Strathmore head coach Richard Miranda said. “Their press wasn’t something that disturbed us. We’ve seen other presses. Roosevelt presses 100 times harder and we were able to manage that press. Tonight it was like we just couldn’t function.”

The Farmersville magic is difficult to describe. They’re technically sound and Rosales said the team has worked very hard even when some of them were playing volleyball to work at learning how to be better basketball players, to learn the plays and terminology. But it is the way they seem to read each other’s minds on the court that makes them extraordinary to watch.