EXETER – The Exeter Monarchs won their twelfth game in a row with a 1-0 defeat of the Sierra Pacific Golden Bears.

The Exeter Monarchs started off their season with a loss, but since then they came together as a team to make a change. Since their second game on Nov. 21, they have not lost a game and until earlier this week, they hadn’t even been scored on since Nov. 29. As they move into league play, they’ll face new opponents due to the league shakeup and look to continue their winning record. In their second league game, they took on the Sierra Pacific Golden Bears and won, scoring just a single goal 13 minutes into the game.

“We were able to shut them down and tighten things up and take their counter attack away from them,” Exeter head coach Darin Lasky said. “That was their number one thing so I’m really proud of the girls.”

Anyone who has attended an Exeter soccer game is aware of Lasky’s pride in the team. He’s loud and can be heard shouting encouragement and praise across the field as the Monarchs play. Whether it’s a correction of a play that went wrong or excitement that a play went well, the Monarchs aren’t on their own out on the field. 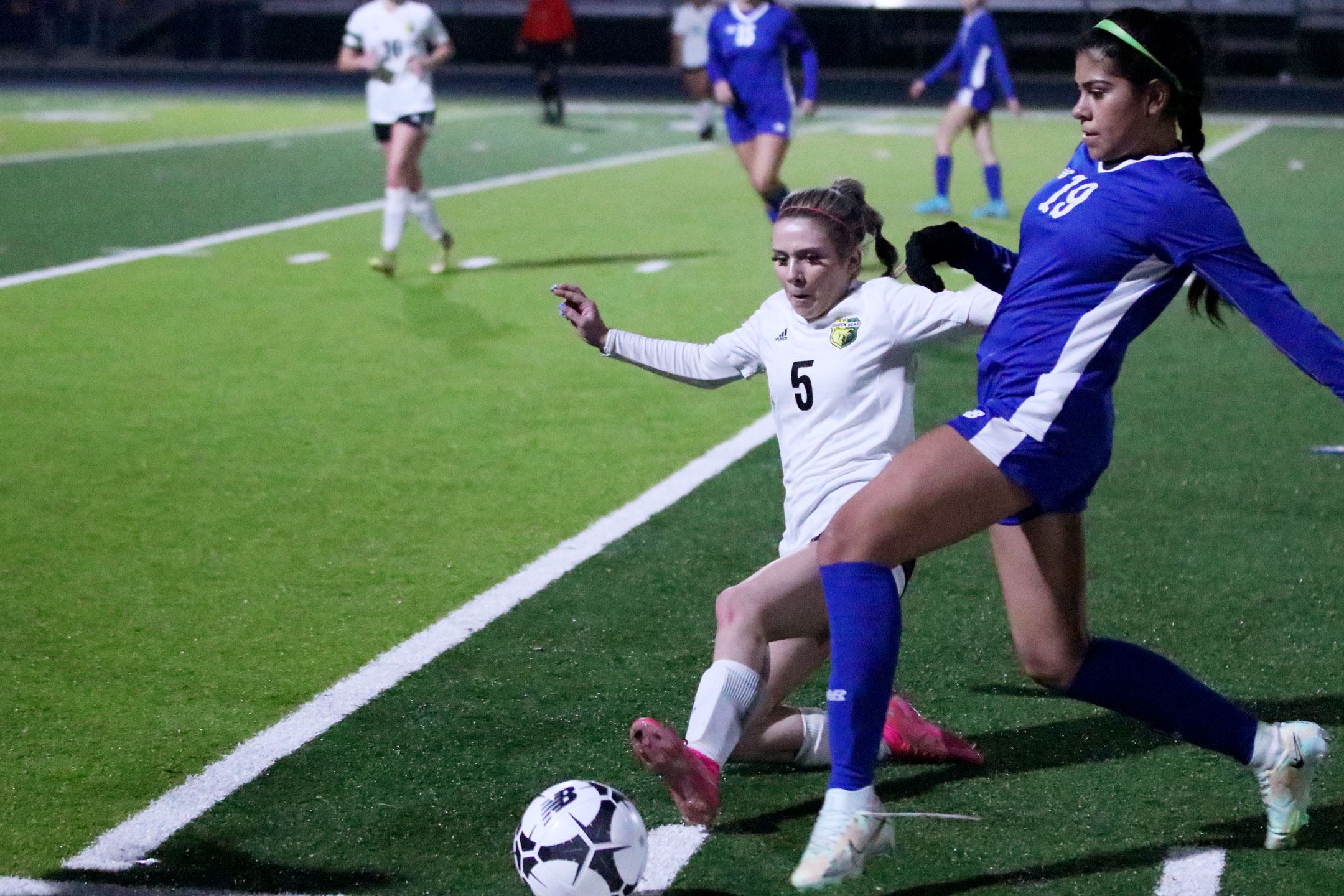 Sierra Pacific's Ava Etulain attempts to slide into the ball to steal it away from Monarch Jennifer Martinez. Photo by Claire Livingston

Lasky emphasizes a positive attitude and playing as a team. On the field, some of the senior players can be heard spreading encouragement and keeping their teammates focused. Rather than dwelling on mistakes, the Monarchs have learned to move on and keep playing, taking note of the mistake to correct it next time.

“We thrive on mistakes,” Lasky said. “If you’re not making mistakes, you’re not learning.”

The Monarchs may have had minor mistakes against the Golden Bears, but none that cost them the game. They dominated possession of the ball, spending most of the time in the Sierra Pacific zone. Their defensive strategy that has led to eleven shutouts so far this season seems to be just not allowing the ball anywhere near their goalie.

The three defenders in the back are all freshmen: Cooper Piepgrass, Addison McNulty and Nicole Thompson. The team lost some players to graduation and Lasky has spread his veteran players all over the field, but the back row is three freshmen who are gaining valuable experience.

The one goal against the Golden Bears came 13 minutes into the game from senior Jennifer Martinez. It was her fourth goal in two games. In the Monarchs first league game against Kerman, they were down 1-0 and Martinez brought the team back with a hat trick for the win.

Despite the team being massively successful and maintaining a 12-game win streak, that isn’t what’s important to the Monarchs. As a team they have a lot of older players and also quite a few younger players. They’re coming together as teammates and friends this season and yet, it’s their attitude on and off the field that seems to be key to winning.

“We’re getting better every game,” Lasky said. “We’re not playing our best soccer but we’re supporting each other and I think it’s totally evident out on the field right now.” 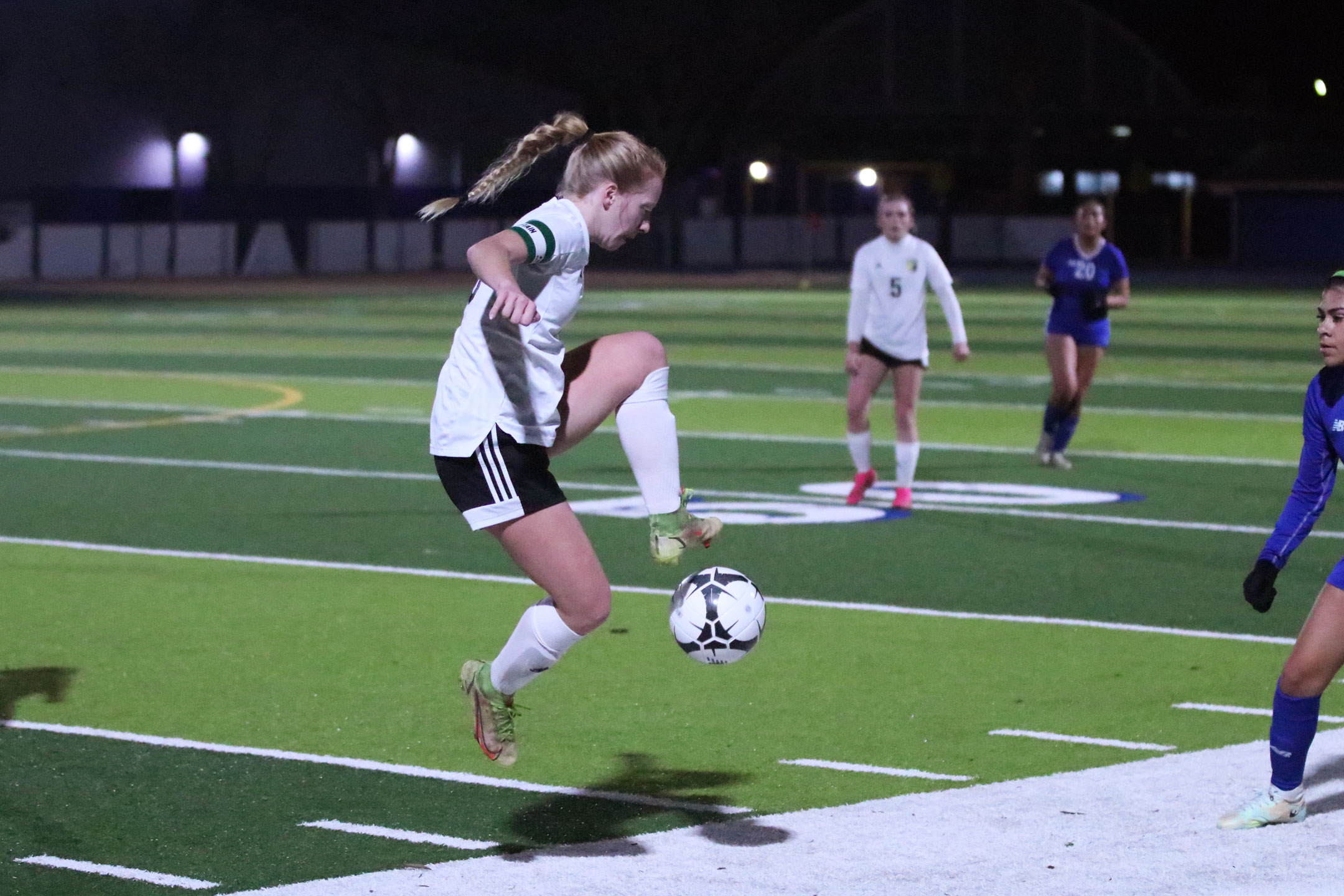 Sierra Pacific's Alexandra McKean jumps to receive the ball at the Jan. 12 game against the Exeter Monarchs Photo by Claire Livingston

One of the most famous win streaks in sports came out of Concord, CA. De La Salle High School’s football team won 151 consecutive games from 1992 to 2004. 12 games in one season isn’t comparable to a 151-game streak over 12 years, but what is comparable is the approach Lasky takes to winning and the mindset legendary Bob Ladouceur had. He never cared about the wins, he cared about his team working together and being good people on and off the field.

Likewise, Lasky said that since the team has been on their 12-game streak, they haven’t once talked about it openly. They’re just playing soccer and working to become better. Their next challenge will be facing Central Valley Christian at home on Jan. 18.