PORTERVILLE – The El Diamante Miners took down the Monache Marauders 62-56 in their first meeting this season.

The El Diamante Miners took home their second league win after traveling to Porterville to face the Monache Marauders. After quickly taking the lead in the first quarter, the Miners didn’t let up on the Marauders and kept their lead throughout the game. Though the Marauders attempted to come back, two three-point shots in the final minute of the game sealed the 62-56 win for the Miners.

“This was a great test for them,” El Diamante head coach Jerome Guzman said. “We needed this to see how we’re growing as a team, especially when things aren’t going our way.”

The Miners headed into a tough environment for their second league game. The gym was packed with Monache supporters and a particularly loud student section that the Miners had to contend with on offense for the first half. Despite the chants and the jeers, the Miners put up ten unanswered points in the first three minutes.

The Miners did bring their own support system and Guzman encouraged a lot of energy from the bench, which kept the Miners moving, even when the Marauders tied the game at 15 after the first quarter. By the second, the Miners cemented their lead. It stayed a close game, but El Diamante never lost the lead once they had it.

“We just dug ourselves a hole,” Monache head coach Justin St. Clair said. “We got down 0-10 and that was the game right there.” 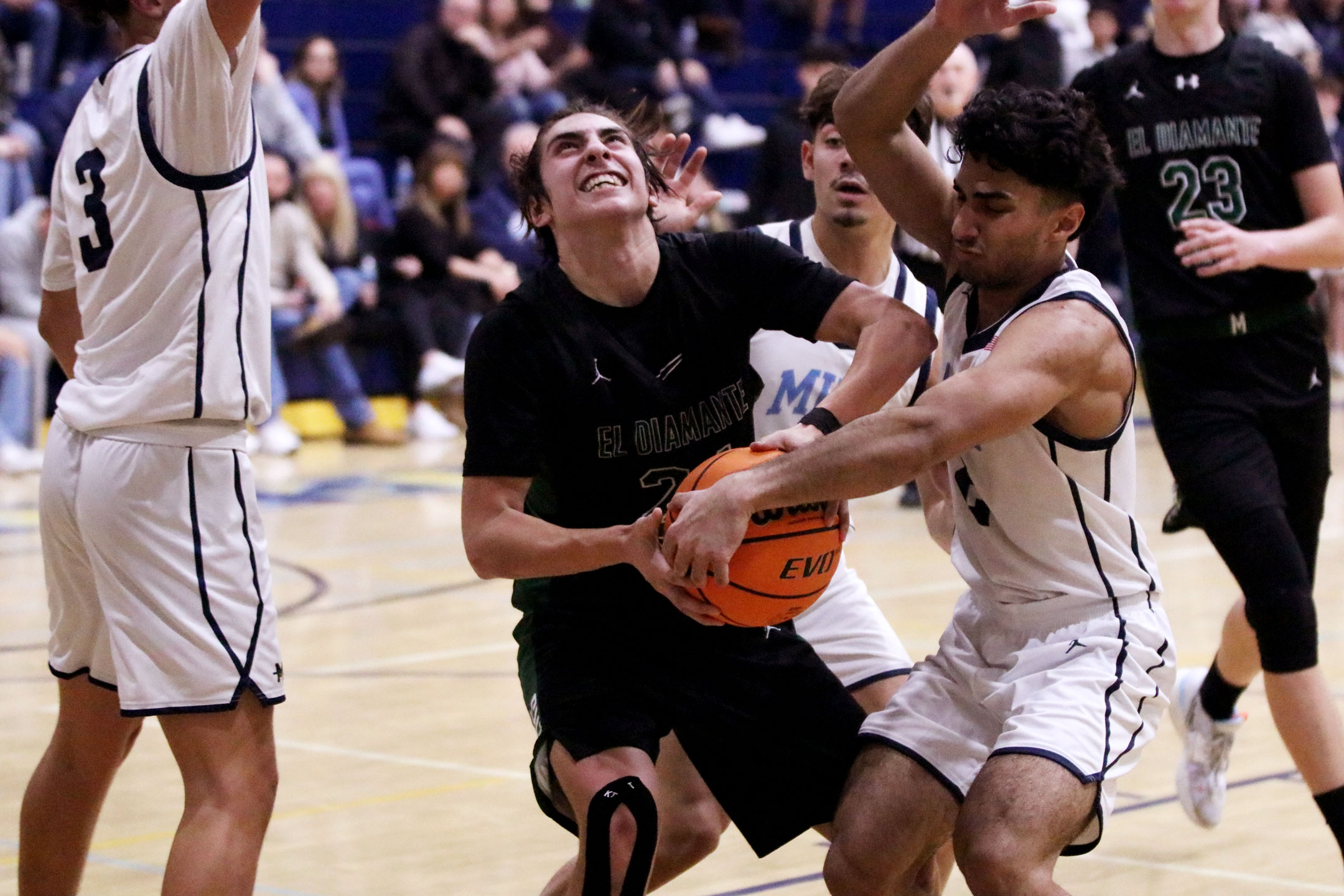 Miner Ernie Morales looks to the basket to take a shot, but Marauder player makes a strong attempt to prevent him. Morales was a strong shooter in the second half. Photo by Claire Livingston

Despite the loss, St. Clair said he’s proud of his team for their repeated efforts to come back. The Marauders knew that El Diamante would be a tough opponent and they never gave up chasing the win. In particular, point guard Ty Baxter put in the work on offense and defense to keep the ball out of the Miners hands as much as possible while Brandan Garcia took shot after shot to keep the Marauders competitive with the Miners score.

On the Miners side, it was an overall team effort to take down one of their toughest league opponents. Center Cooper Schimpf was a strong defender underneath the net and also put up a few three pointers from the outside corner on offense. Ernie Morales was a strong shooter in the second half. But it was Joseph Diaz who made the two three-point shots in the final minute of the game.

“He’s our three point sniper and that’s what he does,” Guzman said.

The Marauders had a chance to come back in the fourth when the Miners were in foul trouble. Elijah Martinez went to the bench with his fifth foul and Monache was closing in on the Miners’ lead with four free throws by Garcia when Diaz put those six extra points on the board. It turned out to be the six point margin the Miners needed to win the game.

As the clock ticked down, the Miners bench exploded in celebration. The Marauders were a big opponent for the Miners. After joining the East Yosemite League, the Visalia schools had to contend with the two Porterville schools as competition for the league championship. The Miners’ defeat of the Marauders is one of the hurdles they needed to get over on their quest to win the EYL.

“On any given night if you don’t come prepared you can go home with an L,” Guzman said. “That almost happened to us tonight. This league is great and I think every team in this league can do something on any given night.” 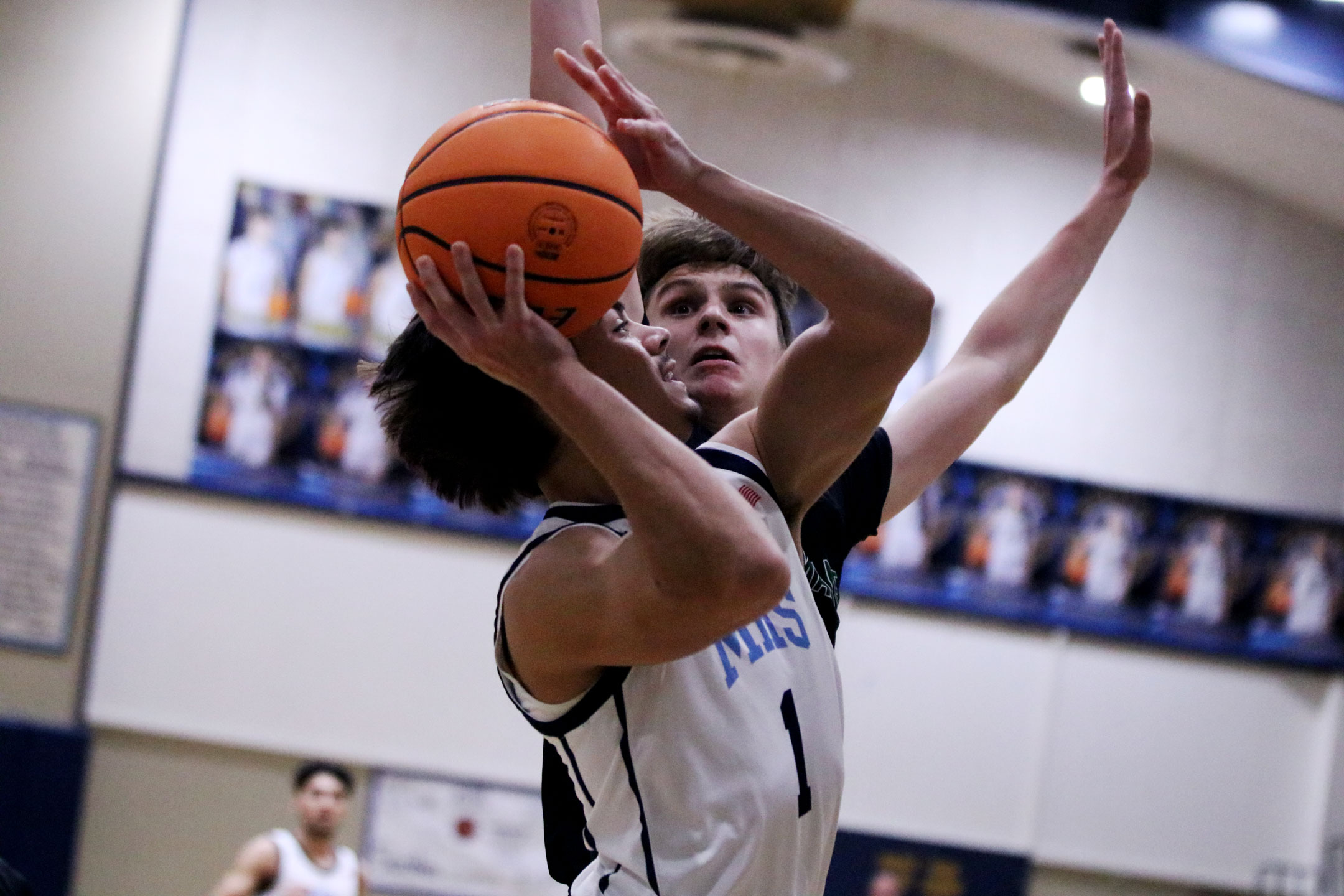 Miner jumps to prevent Marauder Brandan Garcia as he goes up to take his shot. Garcia was responsible for keeping the score competitive throughout the game. Photo by Claire Livingston