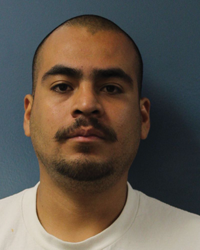 visalia – The Tulare County District Attorney’s office helped to get another gang member off the streets of Visalia.

On May 3, in Department 6 of the Tulare County Superior Court, Judge Gary Paden presiding, Geronimo Garcia, age 23, of Visalia, pled guilty to one count of premeditated attempted murder with the special allegations of using a firearm.

According to the District Attorney’s office the crime was committed for the benefit of a criminal street gang.

On April 3, 2015, Garcia, a gang member, encountered two individuals he believed were members of a rival gang in a shopping center located on Houston Avenue and Demaree Street in northwest Visalia. Garcia followed the individuals in his vehicle and shot at them in their vehicle as they approached the intersection of Demaree Street and Riggin Avenue. A male victim was shot in the stomach.

Sentencing is scheduled for June 9, of this year in Department 6 of the Tulare County Superior Court, Visalia Division. At sentencing, Garcia faces 25 years to life in state prison.

The case was prosecuted by Supervising Deputy District Attorney Melissa Chabra and investigated by Detective James Cummings of the Visalia Police Department.