Fires cause thousands in damages to homes on Minden Street, Ashland Avenue in Visalia

VISALIA –  The holidays are a time when families traditionally gather around the dinner table or the fire place to share stories of Christmases past.

Unfortunately, the enjoyment from reminiscing with family can often distract us from things we would normally pay close attention to. That’s what happened at two residences last week when an unattended stove and fire pit caused Christmas chaos.

The first fire began with a stove top fire at about 3:51 p.m. on Dec. 18 at 3439 N. Minden St. in Visalia. When firefighters arrived they found smoke billowing from the front door. Fire crews entered the home and quickly extinguished the fire burning on top of the stove. After the fire was out, crews worked to remove smoke from the home. Fourteen firefighters on three engines and a ladder truck, as well as a safety officer and a battalion vehicle were able to extinguish the fire and clear the home in less an hour and a half. Damage to the stove and its contents was estimated at $1,000. No one was in the home when firefighters arrived and no injuries were reported.

The second fire began at 1:55 p.m. when a smoldering fire pit was left to close to wooden fence. The fire began at about 1:55 p.m. on Dec. 21 at a home located at 4823 W. Ashland Ave. Off-duty fire personnel in the area used garden hoses to slow the growth of the fire prior to the arrival of Visalia Fire Department personnel. Upon arrival, firefighters found the blaze had extended into the attic above the garage in one of the homes. The fence fire also spread to a tree in a neighbors yard. Firefighters used hose lines to prevent the fire from spreading to the second home. Paramedics did attempt to help one person who refused treatment. No other injuries were reported. The fire caused about $12,000 in damage to one house and $1,200 to an adjacent house.

“The Visalia Fire Department would like to remind residents to be fire safe as the temperatures cool and legal warming fires are utilized,” Battalion Chief Darrin Hughes said.

Sixteen firefighters on three engines and two trucks battled the blaze as well as one command vehicle.

Also in the news 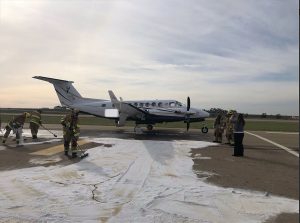 Two planes collided on the tarmac of the Visalia Municipal Airport last week. At approximately 11 a.m. on Dec. 17, the Visalia Fire Department responded to the Visalia Airport for two planes that collided on the Delta taxiway. There were no injuries to any of the occupants and there was no fire involved. There was approximately 100 of gallons of Jet A fuel that spilled onto the tarmac. Fire crews worked to clean up the fuel before clearing the area.