Man who beat his girlfriend sentenced to life in prison

Andres Ybarra, 35, strangled, beat his girlfriend to death in the bed they shared

VISALIA – A Visalia man who brutally beat his girlfriend to death in the bed they shared will now be sleeping on a cot for the rest of his life. 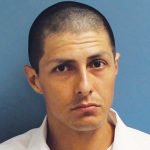 On Dec. 23, Tulare County Superior Court Judge Juliet Boccone sentenced 35-year-old Andres Ybarra to life in prison for the murder of his 26-year-old girlfriend. Ybarra was convicted of second degree murder on Sept. 13, 2019.

The girlfriend’s body was found by emergency personnel on the morning of July 1, 2016. Ybarra claimed that she had overdosed on prescription medication. An autopsy conducted four days later revealed massive internal injuries including four broken ribs, lacerations to her liver, a ruptured kidney, and damage to the renal artery. Additionally, she had hemorrhaging in her neck and head, a broken bone in her neck indicating strangulation, a black eye, and a broken nose. The cause of death was attributed to strangulation and blunt force trauma. Ybarra was arrested on July 6, 2016.

Under current California law, Ybarra must serve 15 years before he is eligible for parole. The case was prosecuted by deputy district attorney Kirk Davis of the Special Crimes Division and was investigated by Agent Mona Whaley of the Visalia Police Department.