VISALIA – Tulare County’s largest hospital district is about to get larger.

Whether answering questions about its services to low-income patients, recruiting and retaining nurses and doctors, finishing its ED expansion or broadening its tax base Kaweah Delta CEO Gary Herbst was consistent in his message – we need to expand. 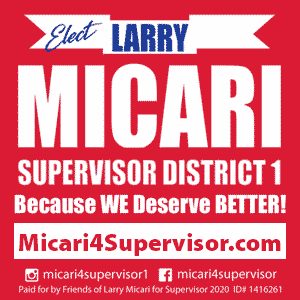 Herbst made his comments on Dec. 12 at 210 Café during the first of five town halls planned in each zone of the Kaweah Delta Health Care district’s boundaries. The town hall was hosted by David Francis, who represents Zone 4 on Kaweah Delta’s board of directors. Of course the most important question was how to pay for it, to which Herbst said the answer may lie outside its boundaries in another hospital district. In November, Herbst said Kaweah Delta began talking with the Dinuba-based Alta Health Care District about possibly merging the districts into a larger one. The talks went so well, Kaweah Delta said they will be making a formal presentation to Alta’s board of directors on March 19.

“When we talked with them, they said, ‘we consider Kaweah Delta to be our hospital,’” Herbst said.

Discussions about consolidation began last summer when a consultant report found that nearly half (48%) of Kaweah Delta Health Care District’s patients live outside of the district’s boundaries and therefore do not share in the cost of buildings and operations through their property taxes. There are seven other hospital districts at least partially within Tulare County besides Kaweah Delta. Three of them, Alta, Exeter District Ambulance and Lindsay Local Hospital District do not operate a hospital any more. There are only two district hospitals – Kaweah Delta and Sierra View. The former Tulare District Hospital is being operated by nonprofit Adventist Health Care. The North Kern/South Tulare Health Care District and Kingsburg Tri-County Health Care District are mostly in other counties. The Exeter district operates an ambulance service and the Lindsay district uses its tax revenue to subsidize the Wellness Center annually as well as one time purchases for ambulances, youth sports tournaments and partnering with Lindsay city government and the school district on various projects. Both said they would not be interested in consolidating with Kaweah Delta.

Merging with Dinuba-based hospital district would broaden Kaweah Delta’s property tax base in an area the hospital is already serving. The total assessed valuation for all the QK study areas is $19.4 billion. The Kaweah Delta district has approximately 68% ($13.2 billion) of the total valuation, five times as much assessed valuation as the next largest study area, Alta Hospital District ($2.6 billion). If Kaweah Delta Health Care District were to consolidate with Alta Hospital District, the combined assessed value of the two districts would create a 20.1% increase in total assessed value for Kaweah Delta. Those additional funds could ease the burden on Visalia taxpayers and help fund the $150 million retrofit of the hospital to bring the older parts of the hospital into compliance with State earthquake standards. The deadline to upgrade or replace the Mineral King wing and its 221 patient beds is 2030.

If that doesn’t happen, Herbst said Kaweah Delta, and other hospitals, are working with the legislature to exempt hospitals in rural areas that are not at risk for a major earthquake. Herbst said Visalia’s risk of a major earthquake is about .01% and the cost of upgrading California’s hospitals may be more than the state can handle. An analysis performed by the Rand Corporation found that California hospitals would need up to $143 billion statewide to meet the 2030 seismic safety standards. He said the biggest threat to a hospital in Visalia would be the loss of power and the inability to perform surgeries. He said most of the operating rooms are located in newer parts of the hospital which meet current earthquake standards.

“Instead, we would work to shift statutes to how a hospital would operate during an earthquake,” Herbst said. “Even without seismic requirements, we would still need to replace those beds.”

Herbst also addressed the conflicting scores from different entities that rate hospitals. The hospital received high marks from Healthgrades in cardiac surgery as one of America’s 50 Best Hospitals for heart bypass and heart valve surgery and rank in the top 5% for cardiac and stroke. Healthgrades also named Kaweah Delta one of America’s 250 Best Hospitals in 32 clinical quality measures and among the top 10 percent in pulmonary services  (treatment of chronic obstructive pulmonary disease and pneumonia), critical care services (treatment of pulmonary embolism, respiratory system failure, sepsis and diabetic emergencies), and overall neurosciences care (stroke care and neurosurgery).

Hospital Care gave Kaweah Delta three out of five stars on treating common conditions such as heart attacks or pneumonia. Three stars was tied for the highest of any hospital in surrounding counties including Clovis Community Medical Center, Kaiser Foundation Hospital – Fresno and Northern Inyo Hospital. The only hospitals in the Valley to receive a higher grade were Stanislaus Surgical Hospital in Modesto, Calif. and Memorial Hospital in Los Banos, Calif.

The lowest score Kaweah Delta received was a ‘C’ from Leapfrog, which puts an emphasis on patient and staff safety as opposed to patient outcomes. Herbst said Kaweah Delta narrowly missed a B grade. Most hospitals in the area received a C grade with few A grades being handed out to Adventist Medical Centers in Hanford, Selma and Bakersfield, and Kaiser Foundation Hospital in Fresno. The only D grade was given to Kern Medical Center.

Leapfrog gave Kaweah Delta low scores primarily for infections but also for bed sores, patient falls, discharge instructions and leaving objects in patients after surgery. The lowest score came for Methicillin-resistant Staphylococcus aureus (MRSA) is a type of staph bacteria that is resistant to many antibiotics. MRSA can be found in bed linens or medical equipment and can be spread if providers do not properly wash their hands between patients. MRSA can cause life-threatening bloodstream infections, pneumonia and surgical site infections. Herbst said the hospital continues to work with staff on reducing infections by emphasizing hand hygiene and disinfecting medical equipment, both of which can reduce hospital acquired infections, through our D.U.D.E (Do You Disinfect Every Time?) campaign.

“We have been successful in treating those infections and patients have not had any bad outcomes,” Herbst said.

During the question and answer portion, one person asked what the hospital was doing to recruit physicians and specialists who accept Medical. About 60% of Tulare County residents are covered by Medical, the highest rate in California. Herbst said the days of private practice physicians are over because doctors grew weary of running the business side of health care and have the added concern of repaying their school loans for obtaining one of the most expensive degrees. Understanding that doctors would rather focus on practicing medicine than business, Herbst said Kaweah Delta and Visalia Medical Clinic came together in 2015 to form the Kaweah Delta Medical Foundation. The partnership has helped recruit 19 doctors to the area and many of them are spending time at Kaweah Delta’s rural health clinics in Dinuba, Woodlake, Exeter and Lindsay and its Family Medicine Center next to the hospital in Visalia. The clinics receive a higher rate of reimbursement for Medical patients than other types of clinics.

The bigger issue, Herbst said, is recruiting more nurses. Due to a nationwide and statewide nursing shortage, Kaweah Delta has nearly 50 vacant RN positions at any given time. During the last fiscal year, which ended June 30, Kaweah Delta spent more than $15 million on traveling nurses to fill-in for the vacant positions and offered $2,500 bonuses for nurses willing to take on extra shifts. That’s after Tulare County ranked 28th on the list of the “50 Cities Where Nurses Earn The Most Money” compiled by Forbes Magazine based on 2018 data from the Bureau of Labor Statistics. According to the article, nurses in the Visalia-Porterville area made an average salary of $89,000 per year.

In August, Herbst announced the hospital made almost $6 million in salary adjustments for its nurses, started a retention bonus program for RNs and added 20 licensed vocational nurses (LVNs) to its support staff. He said Kaweah Delta is also working closely with College of the Sequoias on its LVN to RN bridge program and with West Hills College to boost enrollment in its nursing program. We continue to offer several training programs for new nurses, which includes a student nurse internship program and a critical care nurse internship program.

The statewide shortage has been a major hurdle for Kaweah Delta as the California Department of Public Health has found the nursing level deficient on 20 occasions between February and April. The hospital was unable to maintain a ratio of one nurse to every four patients on 14 shifts in its renal specialty unit and six shifts in its telemetry unit. California is the only state in the nation that is required to be in compliance with nurse to patient ratios at all times.

Another person asked if Kaweah Delta encourages their nurses to continue their education. Herbst said Kaweah Delta not only encourages continuing education but incentives it. Under the health care district’s new tuition reimbursement plan, nurses can earn $2,500 for becoming a registered nurse (RN), $10,000 for bachelor’s of science in nursing (BSN) degree, $15,000 for a master’s degree and $20,000 for a doctorate.

Herbst also shared a brief update on the progress of the Emergency Department expansion and promised that when it is complete later this year, the Mineral King lobby will return to serving as a true lobby and dismissed any rumors that the hospital guild’s gift shop would not return to the lobby.

The next town hall meeting will be held on Feb. 27 in zone 2, which covers Visalia from Goshen Avenue to Caldwell Avenue and Demaree Street to Conyer Street and is represented by Lynn Havard Mirviss on the board of directors. The location of the event has yet to be determined.