VISALIA – Television news reports crime as if it’s around every corner. But sometimes, it’s right inside your home, as one resident found out last Friday. 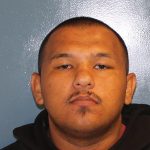 At approximately 12:48 a.m. a Visalia police officer attempted to stop a vehicle suspected of burglary in the area of Goshen and Akers. The vehicle failed to yield and a pursuit was initiated. During the chase the vehicle was involved in a collision at Bollinger Street and Nicholas Avenue.

The vehicle struck a residence at that location causing damage to a wall, and the driver fled on foot. One suspect was taken into custody at the scene. As a result of the investigation officers located numerous items believed to have been stolen from business mail boxes, along with an amount of narcotics consistent with sales.

The suspect in custody was identified at Hector Lozoya, 26 of Tulare. Lozoya was booked for conspiracy, theft, identity theft, narcotics charges and a probation violation. The investigation into this incident remains ongoing. Anyone with information is encouraged to contact the Visalia Police Department. Those wishing to remain anonymous can call the tip line at (559) 713-4738.

Friday, Jan. 31
At 7:58 p.m. in the 1700 block of W. Harold, officers responded to a shooting. Officers arrived and located an adult male suffering from a gunshot wound to his back. He was transported to a local hospital and was listed in stable condition by medical staff. The investigation revealed a single male approached a group of people standing in front of a residence and fired a gun at them. The shooter then fled on foot out of sight. If anyone has information regarding this incident they are urged to call the Visalia Police Department at (559) 734-8116.

Thursday, Jan. 30
At 10:04 p.m., officers responded to a report of a burglary alarm at Sunbelt Rentals located at 1220 N. Century Street. Upon arrival officers discovered that an unknown suspect had smashed the front window and fled with an undetermined amount of property. The investigation into this incident is ongoing.

Wednesday, Jan. 29
At 10:09 a.m. in the 1000 block of S. Mooney Blvd., officers responded to a stabbing. Officers were nearby and observed the suspect, later identified as 37-year-old Paulo Rodriguez, running from the area. Additional officers from the Visalia and College of the Sequoias police departments followed the suspect, and made contact with him in a parking lot north of Meadow Avenue and Shady Street. After a prolonged struggle and Taser application, the suspects was taken into custody. Although a witness reported a stabbing, there was no stabbing, and the female victim of the assault did not sustain any injuries, and did not desire prosecution. The suspect was later booked at the Tulare County Pre-trial facility for charges of resisting arrest, and felony resisting arrest with violence after being medically cleared.