Council green-lights extension of one-way traffic, but pumps the brakes at Burke

VISALIA – The city of Visalia is moving forward with plans to extend one-way traffic on Main and Center streets in downtown, but not as far as many first thought.

At its June 15 meeting, the Visalia City Council authorized staff to begin designing the extension of one-way traffic on Center and Main streets to Burke, but not all the way to Ben Maddox as was initially studied.

The largest problem with the plan was its affect on auto businesses that dominated eastern downtown from Burke to Ben Maddox. Those businesses voiced their opposition to the plan during two public workshops on Jan. 29. Their concerns included the inability to pull cars on and off of the street, losing access to cars coming from downtown and the loss of parking spaces.

Gabriel Jacquez, owner of Cesare’s Collision Repair and Towing at 920 E. Center Ave., said nearly all of the 32 auto related businesses on eastern legs of Center and Main need to move cars between their shops and parking areas constantly. If the streets were one-way, Jacquez said his employees would have to take cars west to Burke, then south to Main, then east to Ben Maddox and back to Center just to park the cars across the street from his shop.

As a compromise, Patel suggested only extending one-way traffic to Burke, keeping Burke to Ben Maddox open to two-way traffic. He said that stretch of the two roadways was still wide enough to accommodate a five-foot bike lane with eight-foot parallel parking.

“Going to Burke Street, we can live with that,” Jacquez said.

The council did not agree on the types of bike lanes or parking stalls to be used on Center and Main. The use of diagonal parking with a shared bikeway (Class III bike lanes) were more auto friendly and maximized the number of parking stalls while parallel parking would allow enough room for a dedicated bike lane and be safer for pedestrians but would subtract two parking spaces from downtown.

Collins said having dedicated bike lanes along Center and Main were crucial in connecting the city’s emerging network of bike paths and trails. Currently the Santa Fe Trail runs from Avenue 272 to Tulare avenue and then picks up again at Houston Avenue and extends north to Riggin Avenue but there is a huge gap between Tulare and Houston. Collins said he would like to see bike lanes running east-west across the city through downtown. In order to avoid car vs bicycle collisions, Collins suggested using parallel parking along on both streets from Santa Fe to Burke because it was easier for cars to see bicyclists.

“In 20 years I’ve never tried to turn north onto Ben Maddox [from Center],” Cox said. “It’s dangerous and I won’t do it.” 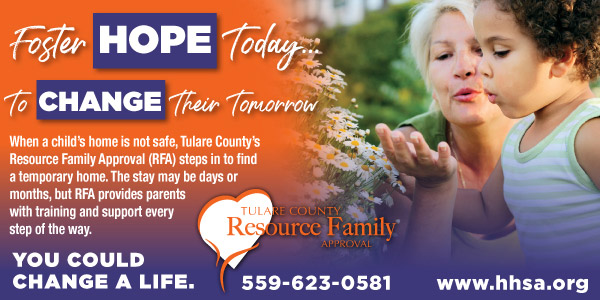