District Attorney: Visalia Jeep driver could be victim of protest

District Attorney Tim Ward decides to not bring charges against Jeep driver in May 30 protest incident, says prosecutors can’t prove he didn’t act out of self-defense

VISALIA – When George Floyd’s death at the hands of Minneapolis police roiled protesters all over the country, Visalia residents took to the corner of Mooney Boulevard and Caldwell. Initial videos of the first major protest on May 30, showed a violent exchange between protesters in the roadway and a blue Jeep sporting an American and Trump 2020 flag.

Cell phone footage posted on YouTube showed the Jeep hitting two protesters and then driving through the busy Visalia intersection. After reviewing reports from the Visalia Police Department, and three different cell phone videos, the Tulare County District Attorney’s office made the decision not to proceed with charges against the driver of the Jeep, who remains unnamed in their report.

In the three videos released by the DA’s office on July 8, protesters walked onto Mooney and stood directly in front of the Jeep. Other protesters on the sidewalk chanted disparaging expletives about Donald Trump.

A photo included in the DA’s report showed a deep chip in the Jeep’s windshield, indicating the damage the full water bottle had done.

The report also recounted the movement by the Jeep’s driver saying that as traffic cleared the intersection, he began to move the vehicle forward, making contact with an adult female protester standing near the left front bumper. When the protester refused to move, the driver of the Jeep turned his steering wheel to the left and moved the vehicle forward again. As he did so, a juvenile protester crossed the roadway directly in front of the Jeep. The driver applied his brakes and made contact with the second protester. Once the second protester moved out of the traffic lane, the driver accelerated through the intersection.

Statements from the public flooded into public meetings for weeks after the incident. Most noticeably at the Tulare County Board of Supervisors and Visalia City Council. Residents called for charges to be brought against the driver and his passengers. However, the report states that prosecution was unlikely in this case.

“In order to prove that a crime was committed by the driver, the prosecution must prove beyond a reasonable able doubt that the driver did not act out of necessity or in self-defense, or defense of others, when he acted,” the report stated. 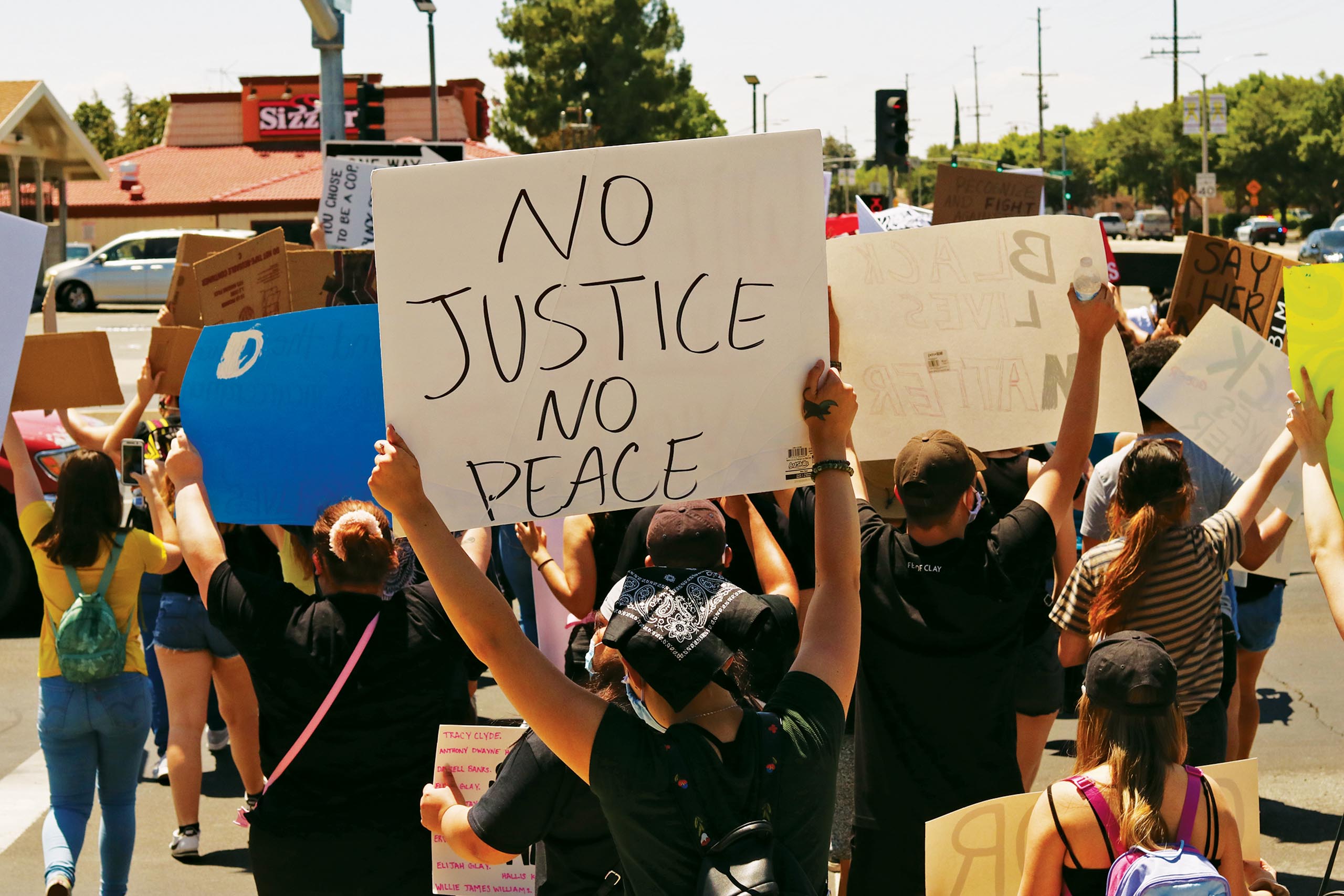 Black Lives Matter protesters called for justice in the case of a Jeep flying a Trump and American flag that ran into two protesters during a confrontation on May 30 at the corner of Mooney Boulevard and Caldwell Avenue. A local activist is now calling for the city to allow a Black Lives Matter street mural to be painted on Main Street, where the Ku Klux Klan marched 90 years ago, to correct the wrongs of the city’s racist history.Photo by Paul Myers

The report went on to state that the actions taken by the protesters were more egregious under the law. The report goes on to indicate the driver and passengers were victims of a crime, running contrary to vocal members of the public who called them white supremacists.

“Additional factors in the evaluation include the legal ramifications resulting from the throwing of objects at a vehicle in the roadway, which is in itself, a felony offense,” the report stated. “While the reports do not provide the identity of any individual responsible for throwing the objects at the vehicle, the aspect of the occupants in the vehicle being victims of that crime cannot be overlooked.”

The report went on to state that the driver told police he was in fear due to the crowd size which was closing in on the vehicle and growing in number. The report states there was cause for the driver’s fear, pointing to their video analysis that appears to show the crowed moving toward the street and another protester waving protesters into the street.

Visalia police chief, Jason Salazar recorded a six minute video in response to the incident on May 30 and cast blame on both sides.

“This incident should not have occurred. The driver of the vehicle acted irresponsibly. And the protesters should not enter the roadway to impede vehicles or throw water bottles as part of a peaceful protest,” Salazar said during his May 31 comments.