VISALIA – A local activist is calling for a Black Lives Matter street mural to be painted on Main Street in downtown Visalia.

On July 7, Linda Chapa began a petition on Change.org, the most widely used online petition site, “demanding” the street mural as “an apology from our town that is not only satisfactory and genuine, but which also includes a promise to the citizens pledging to do all that’s necessary and proper within their powers to abolish racial inequality within our city.”

In the petition titled, “Black Lives Matter Street Mural on Main St. Downtown and Apology for Visalia, Ca,” Chapa said the petition would “correct our towns wrongs” from its racist past that includes a Klu Klux Klan march down Main Street just 90 years ago. She said there are still those in town who feel a sense of pride in the town’s KKK history that have helped that level of racism “survive the test of time.” 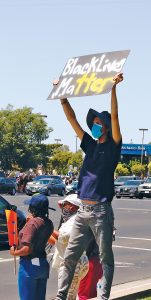 Black Lives Matter protesters called for justice in the case of a Jeep flying a Trump and American flag that ran into two protesters during a confrontation on May 30 at the corner of Mooney Boulevard and Caldwell Avenue. A local activist is now calling for the city to allow a Black Lives Matter street mural to be painted on Main Street, where the Ku Klux Klan marched 90 years ago, to correct the wrongs of the city’s racist history. Photo by Paul Myers.

She states, “We need to cut ties with that part of our past as a city in order to starve that racist bone that still resides within some today, in order for future generations to thrive in a equal world.”

Chapa said she was inspired by her peers in Fresno who were able to convince the city council to allow the community to paint a BLM street mural in front of city hall. She said she is calling on Mayor Bob Link as the Visalia City Council to not only allow for a mural but also provide paint and equipment to ensure “the community can come together to make this happen adequately and safely.”

As of press time, more than 800 people had signed the petition but it probably won’t help them obtain authorization for a mural.

While it has not yet received any official communication or request for the street mural, the City of Visalia issued a statement about its “long-standing and well-established process” for considering applications for murals in public places. According to city hall, murals must undergo an application, review, and approval process governed by local law, and circulation of a petition would not be the appropriate way to make such a request. Under the Visalia Municipal Code Chapter 17.48, murals are considered part of the City’s sign ordinance. The City’s mural guidelines note that the emphasis of murals should be artistic expression, and there are criteria that the mural panel and City Council must consider when reviewing mural applications.

Mural applications are reviewed by the City’s Mural Panel, a citizen group with representatives from the local arts community as well as a community member, who provide review and recommendations to the City Council. The City Council has ultimate responsibility for the approval of murals and they all require the issuance of a permit from the City.

For more information on murals in Visalia, contact Brandon Smith with the Visalia Community Development Department by calling 713-4636 or emailing [email protected] The Mural Review and Approval page is also available on the City’s web site and includes mural guidelines and more.