Former general manager of Fresno Fuego teams up with former Grizzlies and Fuego owner to build an indoor soccer complex at the corner of Johnson St. and School Ave.

VISALIA – Nothing brings the world together quite like soccer and one Visalia man’s goal is trying to unite all of the sports’ various local factions under one roof, quite literally.

Two years ago, Jeremy Schultz pitched his plans to bring an indoor soccer complex to Visalia. He wanted to create a destination where soccer fans of all ages could come and play in a safe environment and enjoy a good game, a cold beer and enthusiasm for the world’s most infectious sport. Just last month, Schultz announced his ownership group, called Soccer City 1852 Visalia, is in negotiations to purchase property at 421 N. Johnson St. for the project. Schultz said he plans to remodel the existing 19,500 square foot metal building into two indoor “street style” soccer courts and a brewery.

“We are moving forward optimistically and cautiously,” Schultz said.

It shouldn’t be a surprise the project is coming together as Schultz is a leader in the local soccer industry. Schultz is currently president of the South Valley United soccer club in Visalia but is best known for his time as assistant general manager of the Fresno Football Club (Fresno FC) and former general manager of its predecessor, the Fresno Fuego. If the project needed any more legitimacy, Schultz has partnered with Bill Cummings, former partner in the ownership of two professional sports clubs in the Valley, the Fresno Grizzlies and the Fresno Fuego, and progressive developer JR Shannon, whose family has farmed in the Visalia area for three generations. 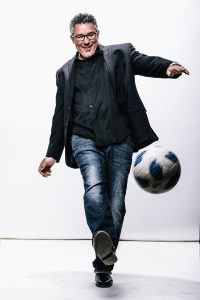 “It was Bill and I’s goal when we started this project to make sure we included local people with a vision for our community,” Schultz said. “We are honored to have JR, his vision for a vibrant community and historical roots involved with this project.”

The facility’s “street soccer” courts would be smaller than traditional outdoor fields to accommodate pick-up 5-on-5 games, similar to public basketball courts where the winning team stays on to take on the next challenger. Schultz said the fields would be 50 feet wide by 80 feet long and promote a style of play popularized in metropolitan areas where space is limited. He plans on running leagues ranging in age from Under 6 to Over 40 for men, women, co-ed and youth. Seasonal leagues would run four times per year with weekend tournaments and non-league, open play times during the week. Schultz said he is excited about adding an inclusive destination where people can foster their passion for community through sport in the northwestern portion of downtown, just down the street from Rawhide Stadium.

“We want to complement what is already going on at the stadium and support the professional sports environment in the downtown area,” Schultz said.

Schultz had originally planned the Soccer City complex on three acres of city-owned property at the corner of Oak Avenue and Tipton Street across the street from ImagineU. That location checked several boxes for Schultz who was looking to locate the sports center near the newly formed microbrewery district, which was created in the hopes of renovating eastern downtown.

Proposed floor plans for that facility included two indoor soccer fields, two street soccer fields, a beer garden and tap room, and two, 2,000-square foot retail lease spaces and two, 1,500-square foot retail lease spaces. The indoor fields would be similar to those found at McDermont X in Lindsay. The indoor courts would cater leagues where players can join for a nominal fee and play eight or nine games in a 10-week window.

While Schultz has downsized the footprint of the project, he isn’t cutting back on his vision for uniting the area’s soccer culture under one roof.

“We have an exciting and healthy soccer landscape and this facility will be a proud display of that landscape for the community and bring people together,” Schultz said.

COS men’s soccer coach Renato Bustamante grew up playing street soccer in Lima, Peru. He said the style of soccer doesn’t require large open spaces, so it is easier to play, and fosters creativity and innovation with ball handling to weave in and out of tight spaces.

Bustamante said Soccer City would create a year-round place for kids to play that is supervised day and night and air conditioned in the summer months.

“It’s not common for parents to let kids go and play at the park all day anymore,” he said. “This would give Visalia a centralized place for kids to play and to help establish a soccer culture that doesn’t really have a place to exist here the way it should.”

Bustamante came to the Valley in 2013 to play for Fresno Pacific University before joining the Fresno Fuego and later the Fresno FC when Schultz was general manager and assistant general manager, respectively. Bustamante now serves as director of coaching for the South Valley United, a youth soccer club Schultz and six others founded in 2002.

The youth organizations are grassroots community club programs that are the foundation of the future of the game, focusing on the development of young male and female players.  With South Valley United specifically, we have about 20 teams and these are players ages 7 to 18, the teams are made up of players from throughout the greater region.  These are players that are serious about their soccer and personal character development and hope to pursue the game at higher levels.  It is the first step into being identified for college and professional opportunities.

When his former GM announced that he would be a part of a project to bring an indoor soccer complex to Visalia, Bustamante said that’s when he believed something like that would happen in Visalia.

“Schultz is a name well established in the soccer community,” Bustamante said. “He has a really proven track that he gets projects done.”

Bustamante’s South Valley United is just one of the youth soccer clubs based in Visalia. The other is Central Valley Premier, run by its director of coaching Jose “Chiva” Cuevas, a former semi-pro soccer player who spent time in player development with the Fresno FC. The clubs are extremely competitive on the field, but support each other off it. He said at one time there was some “bad blood” between board members of the two organizations but he and Schultz have become good friends and partners in promoting soccer in Kings and Tulare counties.

“Getting an indoor field to keep kids off the streets would be a big-time step for Visalia,” Cuevas said.

Born and raised in Farmersville, Schultz recruited Cuevas to play for South Valley United’s U16 team in 2005. When Schultz took over as a director and coach of the California Odyssey Club in Fresno in 2008, Cuevas joined him and was quickly competing at the highest level for youth boys in the country. Schultz and his coaching staff then recruited Cuevas to play for the Fuego in the United Soccer League’s (USL) Premier Development League, the first level of professional soccer.

His time with the Fuego opened the door for him to play as a full time professional for the Charleston Battery of the United Soccer League’s Championship league, a competition level one step below Major League Soccer.

“I want to provide that kind of opportunity for another kid out of Farmersville,” Cuevas said. “Soccer City would be a huge step toward that.”

Schultz said he would love to open Soccer City 1852 Visalia by mid-2021 but can’t make any hard predictions given the pandemic.

“We are hoping that the timing is right but you don’t want to build something when no one is allowed to go in it,” Schultz said.

Anyone interested in getting more information about Soccer City 1852 Visalia can contact Jeremy Schultz by emailing [email protected] or visiting www.1852visalia.com to be added to their database for updates on the project.