Contractors are packing up now after erecting the 88-acre complex that includes several out buildings, a truck maintenance facility, fuel center, customer service center and entrance station besides the main tilt-up concrete building with its advanced package sorting conveyor system. UPS bought the land in summer of 2017 from CapRock Partners adding 30 acres last fall from the same party.

But wait, as they say…there’s more.

Right next door to UPS is some surprise news about another mega-shipper coming to town. Early indications from contractors on the project point to a potential new Amazon logistics center with a 1.3 million-square foot distribution center of their own. One of these “fulfillment centers” typically employs 1,000 or more people. Amazon has not announced the Visalia project, and the city of Visalia has not confirmed Amazon’s willingness to locate to town, but the contractor on the job, Gray Construction, based in Kentucky, is an Amazon contractor who secured the city building permit.

Blake Steele with Gray Construction says this will be the third Amazon center he has worked on and projects that it will be completed in 11 months. Some 300 construction workers will be needed during the busiest months of the Visalia project.

A similar scenario played out in Fresno when the distribution center was built and open in less than a year. In Fresno’s case “During peak times, the fulfillment center ships over 1 million packages per day and has created over 3,500 jobs within the immediate area” says a report.

Bakersfield has also seen the completion of a four-story Amazon complex near their airport, that was expected to open Sept. 6, according to the Bakersfield Californian.

The new general manager told the press there, “This is one of the most advanced buildings that Amazon has,” he said, adding that the Bakersfield building—four stories, each about the size of 11 football fields—is the company’s 26th fulfillment center in California.

Visalia could have the 27th. 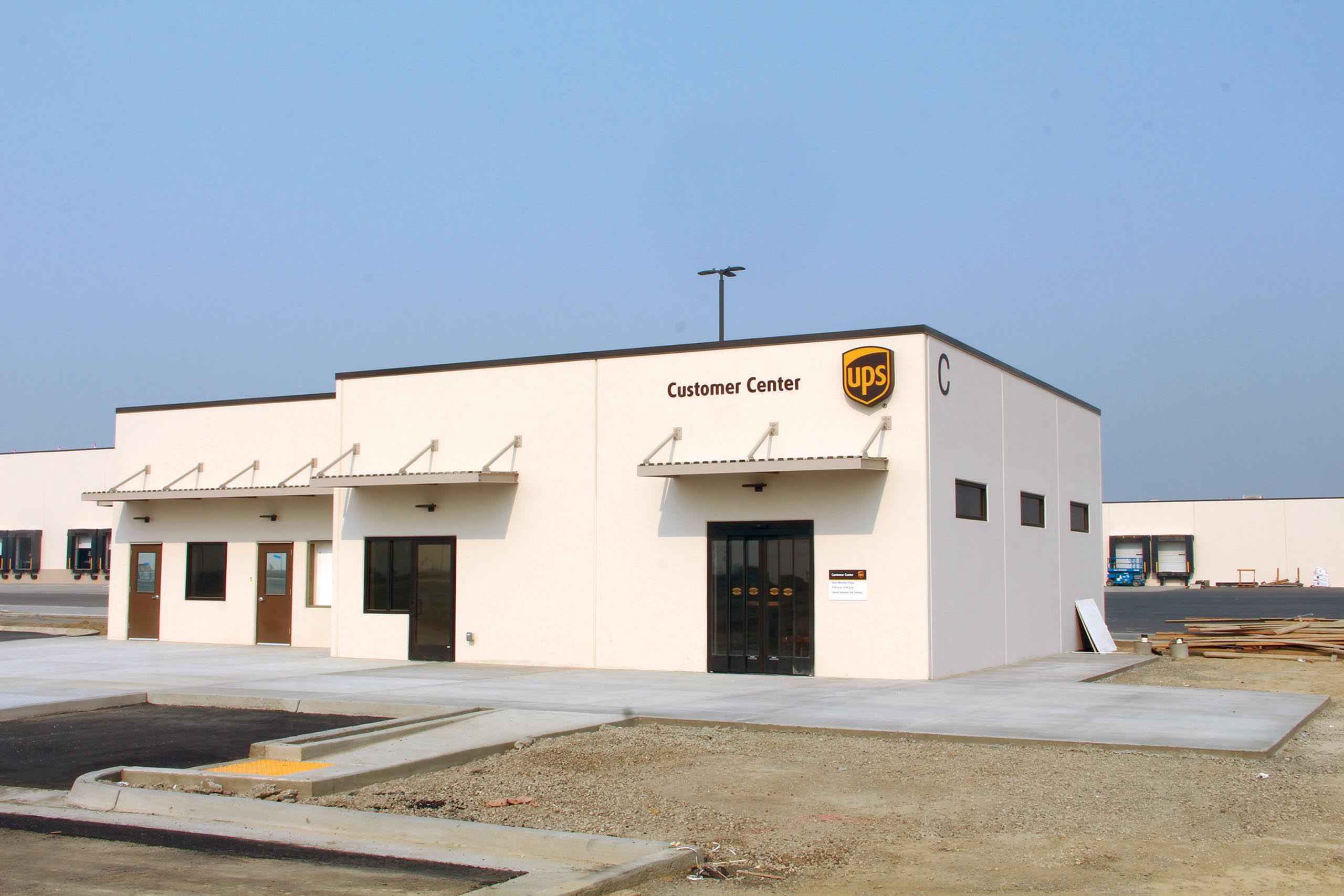 UPS is prepared to open their Visalia shipping center after years of construction. But on the heels of their unveiling, an Amazon shipping center may be locating next door.Photo by Jermaine Johnson II

Like UPS, Amazon is not just hiring robots to do the work. Instead Amazon has more than 110 active fulfillment centers in the U.S. and more than 185 centers globally.

Property owner Newport-based CapRock Partners has been working on this 1.3 million “spec building” for over a year and just received city approval to begin construction with grading of the empty site starting last week. Electric power to the site for construction was supposed to be added last week to the new address: 3315 N Kelsey. The building is projected to have a million square feet at ground level and a 300,000-square foot mezzanine.

CapRocks’ president Patrick Daniels said he could not comment who the tenant was for the big building, which will be by far Visalia’s largest. Almost 10 Costcos for comparison.

Daniels has been working on their 640-acre industrial park—they call it the Visalia Logistics Center—since 2006 when he first visited Visalia drawn by developer Richard Allen and his successful effort to  bring in VF Corp to Visalia in 2005. VF, a major local employer, is another big UPS customer who came to town because UPS ships by ground from Visalia to most of California in less time than almost all other competitive locations. Scores of other firms have suggested that is why, they too, chose Visalia.

With shipment behemoth companies on the horizon Visalia is planning to widen Riggin from Plaza to Shirk in coming months as well as punching Kelsey north that will hopefully allow Amazon street access. And the Riggin and Kelsey intersection will now be signaled. Riggin is already busy with truck traffic with the new connection to Highway 99 (Betty Drive Interchange) that fully opened in the past As for jobs at Amazon the Bakersfield location is a close model, offering warehousing jobs paying $15 to start, the company says, and full-time employees immediately qualify for comprehensive health benefits as well as a 401(k) program with a 50 percent company match. Amazon also offers to pay 95 percent of tuition for college courses in in-demand fields, regardless of whether that education relates to their current job with Amazon.

Amazon.com also said last week it received federal approval to establish a fleet of drones and will begin limited tests of package deliveries to customers in the U.S., although a number of key steps remain before widespread use of the technology will be allowed

What will be the impact on government of a new Amazon logistic center here? A summary of Amazon’s 2019 U.S. taxes they reported includes:

More than $2.4 billion in other federal taxes, including payroll taxes and customs duties.

Last year alone, Amazon collected and remitted nearly $9 billion in sales and use taxes to states and localities throughout the U.S. The recent enactment of “marketplace laws” by 40 states allows Amazon to legally collect state and local sales and use taxes on behalf of third-party sellers who sell their goods on their platform.

If Amazon is the golden boy company, UPS and their stock has been on a tear recently as well, propelled by a surge in e-commerce activity this year as a result of COVID-19. UPS stock has doubled since May.

With all those internet orders a recent analysis expects that e-commerce will require more than three times the logistics space of brick-and-mortar sales, according to 2019 data.

Global e-commerce sales are projected to more than double to $6.5 trillion by 2023, according to Statista. The Boston Consulting Group estimates U.S. e-commerce sales will double to $1 trillion, growing at six times the rate of all retail transactions.

Those projections came before the coronavirus pandemic, which has prompted an explosion in online shopping by people avoiding brick-and-mortar stores because of stay-home orders or fear of being infected by the virus. BestBuy recently reported that e-commerce sales grew 242% from the year-ago quarter and now represent 53% of total sales.

The side-by-side locations of UPS and Amazon in Visalia may encourage a mutual feeding frenzy in our future. Amazon is UPS’ largest customer, accounting for almost 12% of UPS’ $74 billion in revenue last year.

Besides taxes, payroll and the job impacts of the double powerhouses of UPS and Amazon, the developments will clearly draw more companies to Visalia officials said. Already five more spec buildings are nearing completion within a country block of the two centers.

CapRock itself has 300 more acres just to the north of the prospected Amazon and completed UPS sites and Fresno developer John Brelsford, who already has a dozen tenant-filled big buildings in the industrial park, has 150 acres  at the northwest corner of Plaza and Riggin. CapRock too has plans to build another 500,000-square foot spec building just north of Amazon.

The coming of all this new industry along the city’s northern edge should enhance homebuilding in the area and spur development along Riggin, a continuous four-lane artery that now ties to Highway 99. To the west of Plaza, Brelsford is planning several million square feet  of new industrial space and sources say Tevelde has long range plans to annex land not yet in the city north of Riggin, plenty more land almost to Highway 99.