Staff estimates there are about 6,000 decommissioned trash cans left to grind into pieces at wastewater treatment facility and truck to landfill

VISALIA – The wasteland of waste cans at Visalia’s wastewater treatment plant off Highway 99 is nearly cleaned up, but much of the solution involves taking the material from one plot of dirt to another.

At its Sept. 21 meeting, the Visalia City Council voted to end its contract with AZS Dependable, Inc., who was hired to recycle the 30,000 decommissioned trash cans, and finish the rest of the work themselves. Public works director Nick Mascia said the project has stalled since mid-July but needs to be completed before the rainy season to avoid costly spraying by the mosquito abatement district in February, that costs about $800 per week, and totaled $6,500 last winter.

AZS had swooped in and made an offer in late 2019 after the city did not receive any bids for the job. The original contract for $51,000 was signed in January and by February AZS reported it could only recycle half of the cans, but would haul away the rest. AZS discovered that half of the cans yielded a high-quality material that could easily be recycled but the other half contained additives that made the plastic impossible to recycle. In order to sort the cans, AZS hired three additional employees and purchased special tools to identify which cans were recyclable and which were not. In order to complete the work, the city council approved a $112,000 change order on May 4 and extended the deadline for removing the cans from May 31 to July 29.

“If something can go wrong it will go wrong,” Vice Mayor Steve Nelsen said. “This has been a cluster from day 1.”

Knowing it had missed both deadlines, AZS did not ask for an extension of the project but did want the city to pay it for removing 80% of the 96-gallon plastic containers. The city has already paid out 75% of the contract, $122,000, but staff estimated it had only removed an additional 2% of the cans or 77% of the contract. Becky Chan with AZS dependable said they believed they had already completed 80% of the project. 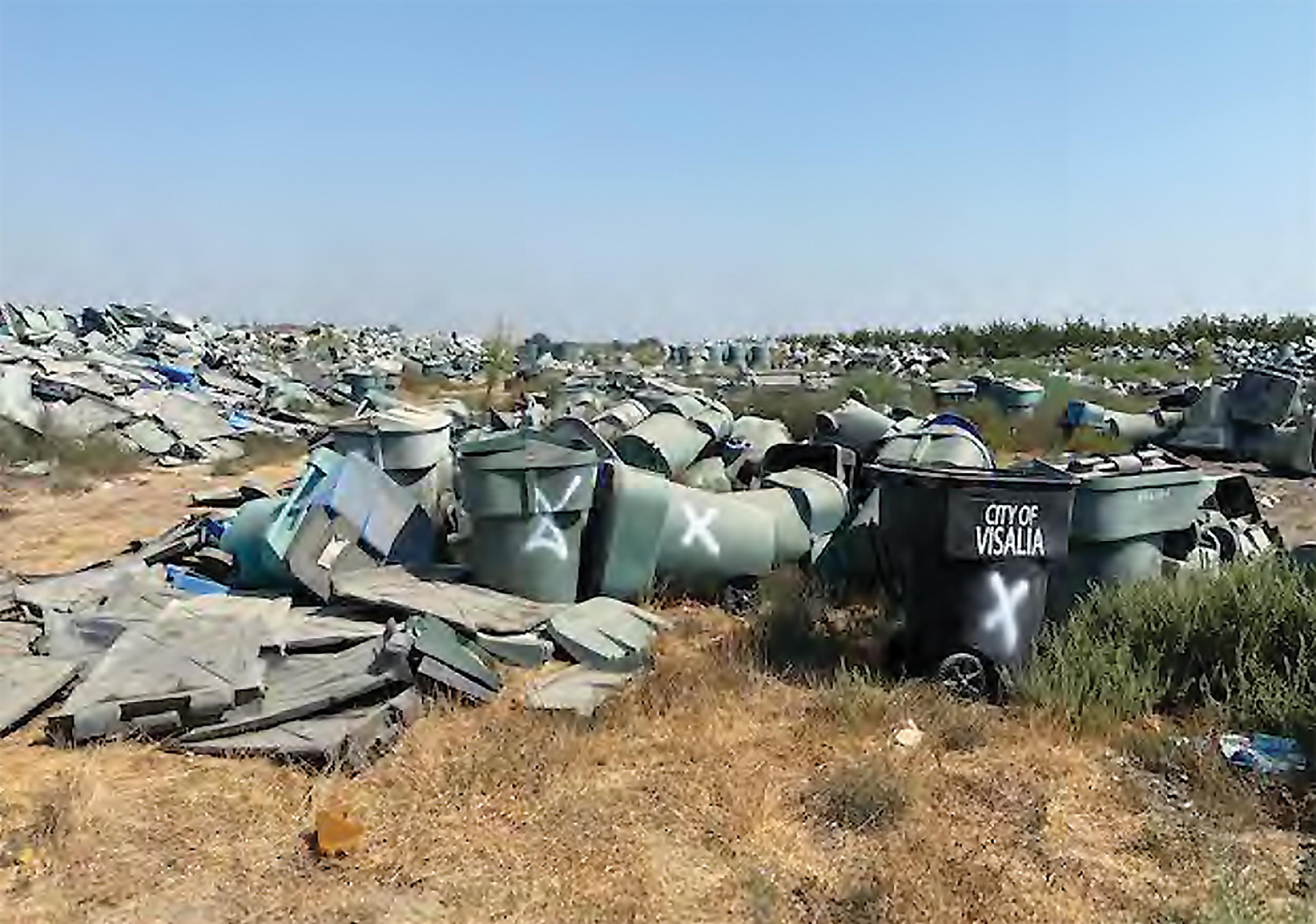 City of Visalia staff estimate there are about 6,000 of the decommissioned split trash cans still left on the north side of the city’s wastewater treatment facility off Highway 99. Photo courtesy of the City of Visalia

Councilmember Phil Cox said he wanted to pay the 5% and then have the staff use the “largest piece of equipment” they have to “smash it as thin as you can get it and we’re just going to throw it all on a truck and throw it away.” Cox said the entire situation was frustrating after coming back to council several times for a seemingly simple job to clean up decisions made in the past.

“This is the gift that keeps on giving,” Cox said. “Every time we come back here this council is being kicked in teeth for decision made 25-30 years ago by another council.”

Mascia said staff estimates there are about 6,000 cans left and that it would be easier for staff to rent equipment and do the grinding themselves rather than continue to pay AZS a contract on which it could not deliver under budget. There is about $156,000 of the original $340,000 budget remaining. Public workers manager Jason Serpa said paying a crew of six people, renting a grinder for four weeks, as well as trucking fees, tipping fees at the dump and other tools and materials for the job would cost $138,424, meaning the project would still come in under budget.

Serpa offered the council three options. The first involved taking staff time to count the remaining cans to see if AZS had met the threshold and pay them the 80% if there were less than 6,000 cans left and not pay them any additional money if there were more. Option 2 paid AZS the remaining 5% to end the contract and do the work themselves or Option 3 to count the cans, pay AZS 77% and any percent over 77% based on the final count and city work crews still complete the work.

Mayor Bob Link suggested authorizing staff to end the contract and to negotiate a deal to pay the company between 2 and 5%. Councilmember Brian Poochigian said to split the difference, pay the company 3% automatically and then move on with the grinding, loading and dumping the remaining cans at the landfill. Nelsen made the motion and it passed unanimously.

“My hope this is the last session you see me with this item,” Mascia said. “You inherited it and so did I.”