VISALIA – The City of Visalia spends $1.8 million in local tax revenue for programs and services designed to reduce its homeless population, including additional millions in state and federal funding, yet has seen a 148% increase in the number of homeless in the last decade.

This year alone Visalia’s homeless population has grown by 14% with about 540 people living on the streets, according to the annual Point In Time survey conducted each January, although many estimate the number to be closer to 1,600. The growing list of people living on the streets, in the parks, under the overpass and along the river prompted the Visalia City Council to plan a workshop series to discuss homelessness and next steps to address the issue.

The first of three city council work sessions on homelessness was held on Oct. 19. Vice Mayor Steve Nelsen said the homeless issue is disproportionately affecting his district as he counted more than 200 people living along St. John’s Parkway and another encampment at the Highway 198 interchange at Ben Maddox Way in District 5. He also serves as executive director of Downtown Visalians and gets daily calls from business owners about homeless people rummaging through their dumpsters, urinating in the alleyways and sleeping near the entrances to their businesses.

“It’s not fair to the people who live on the St. John’s who deal with homelessness 24 hours, seven days per week,” Nelsen said. “We deal with it every day.”

Councilmember Greg Collins and several other councilmembers took a tour of St. John’s to see the size of the encampment, the living conditions, the amount of trash and its affect on the waterway and surrounding city trails.

“It was a sobering couple of hours,” Collins said. “I hope the walkabout was sobering enough that this council begins to take the matter seriously.” 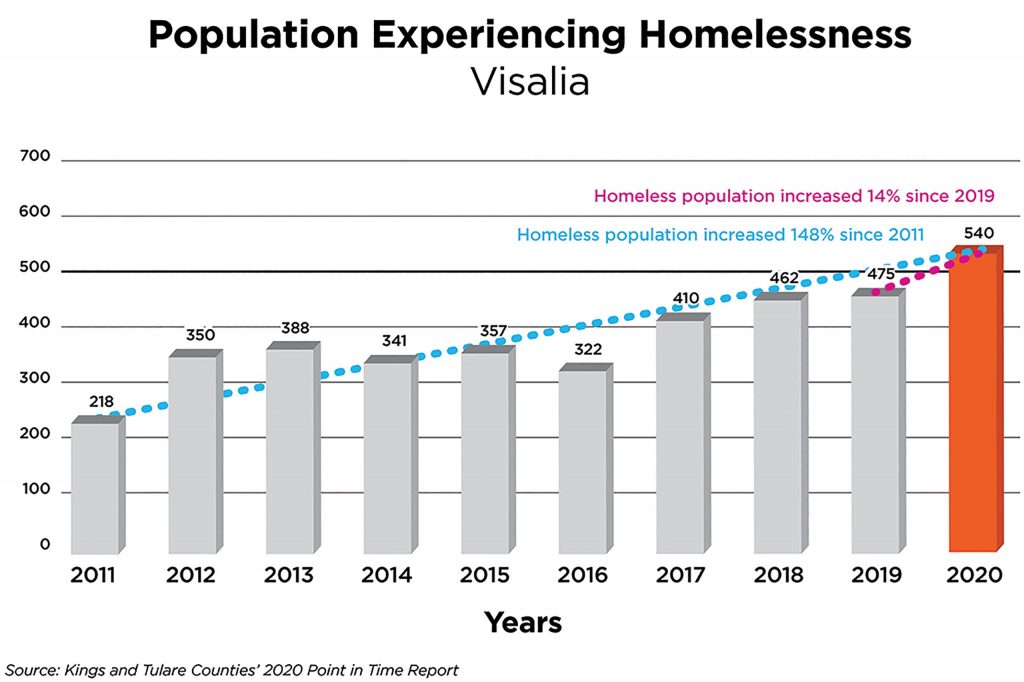 Visalia Police Sgt. Brian Winter presented the staff report for the first session. He broke down the various community service and public safety department responses to homelessness and programs that make up the nearly $2 million the city invests in its attempt to address the issue.

The most successful of the programs is the city’s Environmental Cleanup Opportunities (ECO) Project. Created in 2017, the ECO program focuses specifically on unemployed individuals who are experiencing homelessness to assist with getting them the documents to be job ready, be reintroduced in to the work force and gain job skills. The program is administered by Community Services and Employment Training, Inc. (CSET) which has referred 121 individuals to the program. Forty-nine of those individuals were enrolled in the work program and began cleaning up trash throughout the city. So far this year, ECO workers have removed 102,000 pounds of trash from the city, including the homeless encampments in the St. John’s River bed.

Ten graduated to the second phase of the program and obtained full-time employment with the city’s Solid Waste Department converting decommissioned split trash cans into replacement refuse and recycling cans. Eight of the 49 went on to obtain employment outside of the subsidized program. The city is now expanding the program to have participants work in other city departments including parks, urban forestry and the Visalia Police Department’s HOPE Team.

“The participants of the program have noted being proud of their accomplishments and their new skills,” Winter stated in his report.

Another program finding some success is VPD’s Homeless Outreach and Proactive Enforcement (HOPE) Team. Created in 2017 to approach the issue of homelessness in a different way, the team’s mission is “to reduce homelessness in the City of Visalia by working with stakeholders to find long-term, supportive housing for homeless individuals through outreach and community education, and also to proactively address the public safety concerns and impacts related to homelessness.” Since late 2018, Tulare County social workers have been doing ride-alongs with HOPE officers to assess those living on the street, set up appointments for them, assist with follow-ups and refer them to programs like ECO. Councilmember Brian Poochigian said he supported both of the programs but wondered if it was effective at placing the participants in housing. Winter said the city had successfully referred people in the program into housing but ECO was not designed as a housing placement program.

“We can’t throw money at the problem and think it will go away,” Poochigian said.

Sgt. Brent Miller said 37 people had been housed thanks to the HOPE Team since it began its partnership with Tulare County Mental Health in 2018 but a “low percentage” of those placed into shelter and housing remain there. He said the greatest obstacle to keeping people off the streets was drug addiction but for many others it was simply unfamiliar territory.

“They are so used to living at the river, the idea of living a normal life, based on our description, is actually very frightening to them,” Miller said. “And you can see that when you talk to them. If ask if they want a house, most of them say no. They live where they live because they are comfortable with their surroundings.”

Supervisor Amy Shuklian, who is also chair of the county’s Homeless Task Force, told the council housing continues to be the No. 1 barrier to reducing the city’s homeless population. She said most non profits dealing with homelessness say the biggest issue is they have a lot of people with housing vouchers waiting for units to open up. The county has made strides in developing permanent housing units for the homeless through two state-funded projects. Project Room Key, which provides counties funding to purchase vacant hotel rooms to quarantine homeless residents who test positive for COVID or create rapid housing for homeless, has provided shelter to 223 people in four hotels countywide since June. Project Home Key provided funding for the county to purchase hotels left vacant during the pandemic and convert them into permanent housing. In July, the Board of Supervisors purchased the 99 Palms Inn on Highway 99 south of Tulare and has awarded $5.2 million in contracts to convert the rooms into permanent housing units for the homeless.

“This has been a silver lining with COVID,” Shuklian said.

The city council has identified $630,000 in state funding annually to build and operate a low-barrier homeless shelter. Collins asked if that shelter would give the police department the legal tools to move people off of public property. Miller said having a low barrier shelter would allow officers to enforce certain ordinances, such as park curfews.

“It seems we can take additional bites of apple [with a shelter],” Collins said.

The city is expected to continue its workshop series on homelessness at its Nov. 2 meeting. The series is being held during the work session portion of the meeting, which begins at 4 p.m. prior to the 7 p.m. regular session.