Residents want gym to pump down the volume

VISALIA – Business is booming at In Shape’s fitness club on Demaree, but not in the way local residents want.

The gym came before the Visalia Planning Commission on Oct. 26 to request two large tents be erected over its tennis courts to shield those working out during the winter. As of Oct. 20, gyms in the counties that fall in the state’s purple tier (for widespread infection rates) are only allowed to open outdoors and the Visalia Demaree location is the only one the fitness chain has been able to do so. 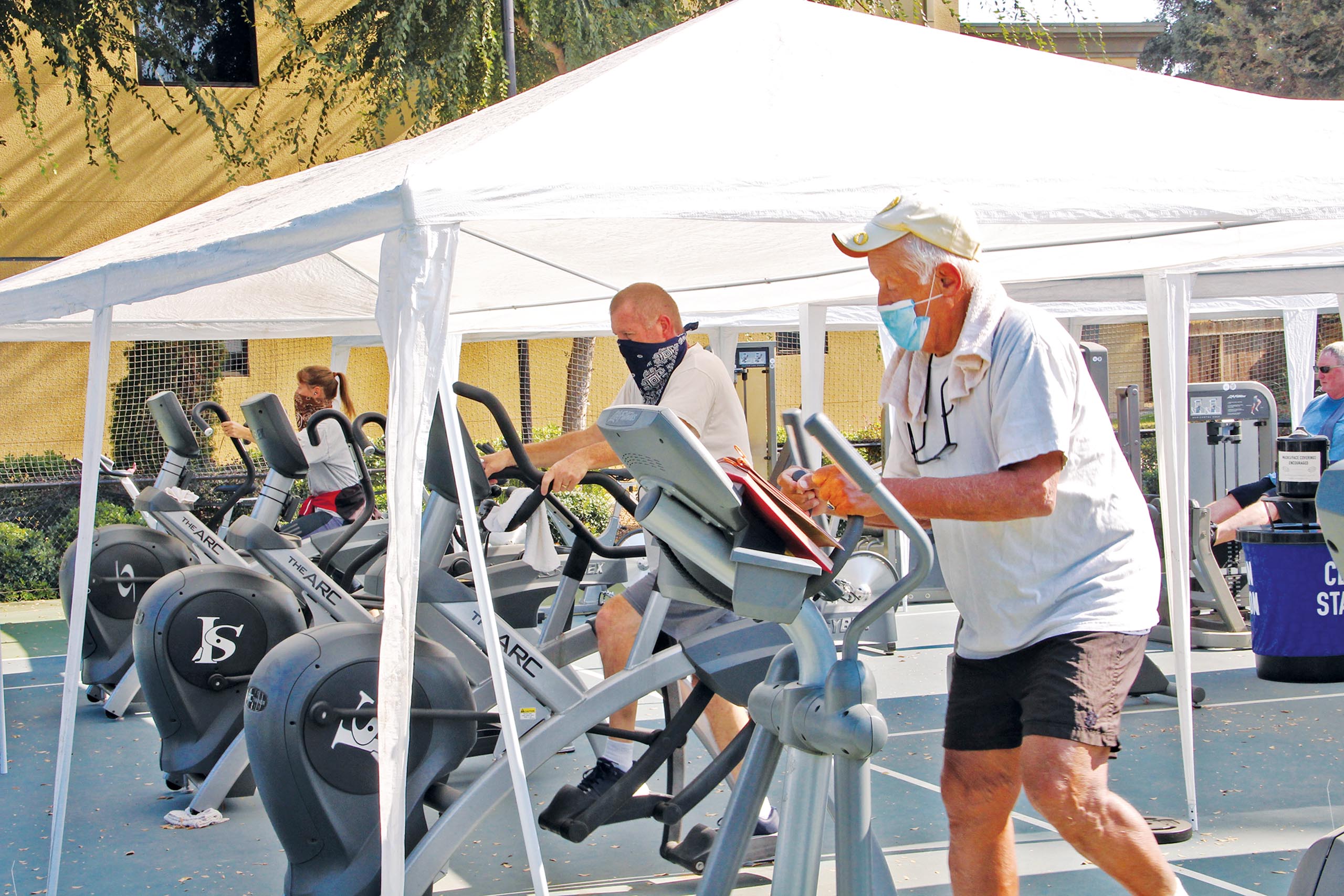 In Shape’s fitness club on Demaree was able to reopen to their members by moving a variety of equipment outdoors such as free weights, squat and bench racks, and elliptical machines. The club setup two large tents over its tennis courts to shield those working out during the winter. Photo by Jermaine Johnson II

Homeowners around the former racquet club said they weren’t in favor of encouraging more people to workout outdoors because the noise from the gym’s fitness classes was too loud.

“If this is approved we are subjected to boom-boom-boom all day long,” said Catherine, who did not provide her last name.

Catherine lives behind the gym on North Tilden Avenue and said she has been dealing with the booming music from fitness classes since August when the gym first reopened for outdoor use. She said she has called 23 times in the last two months trying to get the gym to turn down the volume.

“Instructors scream over the bass and get people attending the class to scream with them,” she said.

Another Tilden Street resident, Linda, said she has also made repeated calls to In Shape complaining about the noise. She suggested moving the tents as far away from her backyard as they can and point the speakers away from her house.

In Shape executive Sandra Stevenson said the only complaint she had heard of was a single email sent to the Planning Commission prior to the agenda being posted. In response to the noise complaint in the email, Stevenson said the club relocated the fitness and cardio to another tennis court further from the property line of that house.

“We get it and we are trying to coexist,” Stevenson said. “We are just trying to survive.”

Stevenson said the Demaree location is the only chance for the fitness chain to survive in Visalia. She said the club’s location on Mooney Boulevard is too small and shares a parking lot with other businesses, making it impossible to move equipment outdoors. In Shape has already closed nine clubs in the Valley permanently and 24 remain temporarily closed. Sixteen clubs in Northern California are open for both indoor and outdoor activities, 13 are open for indoor activities only and the Hammer Lane gym in Stockton, Calif. was scheduled to reopen for indoor activities today, Nov. 11.

“In Shape has been with no revenue and no open clubs for eight months,” Stevenson said.

Andrew, an In Shape employee for the last 10 years, said he has worked at the site since 2014 and this is the first time the club and neighbors were unable to come to some sort of compromise. He said there was one instance where one of the neighbors whose property backs up to the gym had dug a large hole to drain his yard of excess water. The club knew it was a hazard but decided to rope off the area until the man could fill the hole back in.

“Some of the neighbors are blessed to work from home but we are doing everything we can just to work,” he said. “This is temporary, not permanent.”

Another resident, who lives on the corner of North Tildon and Grove Court, said if the tents aren’t soundproof, they’ll just be making the problem worse. She said the noise is so bad she no longer goes into her backyard.

“We’ve had a lockdown and been very difficult for us, too,” she said.

Jeremy Castorio, area manager for In Shape in the Valley, said he has been with the company for 18 years and has never seen anything like the virus’ devastating effect on the fitness industry. He said In Shape has had to temporarily layoff 3,200 people but that Demaree was the only location in Tulare County that could open outdoors due to the tennis courts.

“I never want to experience anything like [massive layoffs] again,” Castorio said. “We do not want to do this permanently just temporarily to survive and continue to be part of the community.”

Gilbert Ortiz, resident of Visalia and In Shape member since 2013, attempted to provide some middle ground on the subject. He said he felt for the residents wanting less noise and for the gym trying to find a way to employ people. He also noted he personally had struggled with depression because he was gaining weight and not exercising when the gym was closed. He asked the neighbors to consider the physical and mental health of the 200 club members whose only outlet is a daily workout at the gym.

“The noise is no different than neighbor mowing lawn in morning,” Ortriz said. “We all want to make this work. We are all in this together.”

Commissioner Chris Gomez said every conditional and temporary conditional use permit requires all operations to comply with all city ordinances, including the noise ordinance. In order to comply with sound ordinance for the residential zone where the gym is located, In Shape must keep sound to 50 decibels or less at the property line. Commissioner Mary Beatie, a senior planner at Provost & Pritchard Consulting Group, said a hair dryer is about 50 decibels and a motorcycle is about 75 decibels and that people conversing in a group is somewhere in between.

“For In Shape to get down to the 50 decibel level would be pretty extraordinary,” Beatie said.

City planner Paul Bernal suggested adding a condition requiring In Shape to take decibel readings at each property line during the fitness classes from 7 to 9 a.m. and 4 to 6 p.m., store the data and then provide it to staff to present to the commission.

Commissioner Marvin Hansen made the motion to approve the permits for the tents with the additional requirement for In Shape to track decibel levels during the class. Staff would then report the data to the commission at its Dec. 7 meeting. The motion passed unanimously.

“If they stay within sound ordinance, then we’ve done everything we can do,” Hansen said. “I don’t see us making requirements that go beyond the sound ordinance.”