The popularity of disc golf continues to rise as Board of Supervisors approve another course, this time at Cutler Park

VISALIA – After months of quarantining during the ongoing pandemic, some Tulare County residents are searching for fun ways to safely enjoy the outdoors. Disc golf could be the answer as new courses are flying up around the county, with a new one coming to Visalia.

At their Feb. 9 meeting, the Tulare County Board of Supervisors approved the installation of a disc golf course at Cutler Park.

The Tulare County Disc Golf club will be prominent in the creation and designing of the course. For funding, they will be raising donations and the board will match those donations up to $4,500. Various community members sponsored nearly all 18 holes for $250 each.

Andy Parkison is president of the club, and has put in a lot of effort to recruit volunteers and donors to make the course possible. He also helped develop the Kings County Disc Golf club to expand their reach. The two clubs played a vital role in the creation of several other disc golf courses around the Central Valley including one at Pixley park, KC Park in Dinuba, Kings River and Burris Park in Kingsburg, Dry Creek Preserve in Woodlake, Bartlett, Murray and Zalud Parks in Porterville. There are also three courses in the works at Valley Oaks golf course in Visalia.

Parkison’s goal is to have the course at Cutler Park completed by May.

Once funding is secured, members of the disc golf club are out in the parks cleaning it up, digging holes, installing equipment, building courses and running tournaments.

“We did more in our county in 2020 than we’ve done in the last 20 years,” President of Kings County Disc Golf club Chris Black said. “The parks are getting improved so it’s a win with the community.” 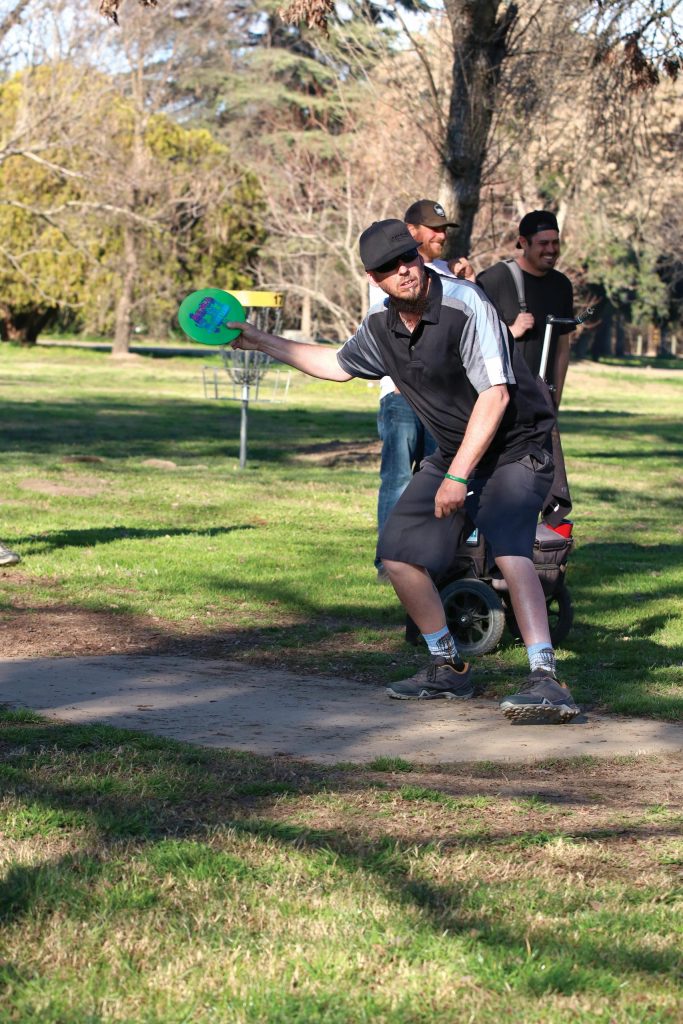 Chris Black, President of Kings County Disc Golf club, acts as a liaison between the community and the city council to expand disc golf throughout the county.Jermaine Johnson II

The intent for all of the courses is to create a safe place for kids and family while the club provides mentors, equipment, and clinics. Getting kids more active outdoors and away from the computer screens is one of their top priorities.

“We work with local organizations for kids who are at risk. We provide transportation for some of those kids and feed them while they’re there,” Parkison said to the Board of the Supervisors. “We really tried to make it more about a community. I’ve had families reach out and say this has taken bonding with their kids to another level.”

The Troy Korsgaden disc golf course was the first built in Tulare County in 2001, and the sport has seen great growth since then. Throughout the Central Valley, there’s a disc golf tournament every other weekend for all ages. Two of the largest being the Central Valley series which goes from November to April and CenCal series that runs from May to October. One of the biggest events of the CenCal series is the End of the Trail classic that happens in September. It is a national Professional Disc Golfers Association (PDGA) event which includes some of the finest players from around the world. Players from as far as Japan come to Mooney Grove Park to compete in the End of the Trail Classic. San Joaquin Valley College acts as a sponsor and have contributed over $100,000 over the last 10 plus years.

In tune with their mission to get more kids involved in the sport, the Tulare County club are hosts to one of the largest disc golf events for young people in the history of the sport. The California Disc Golf Junior Championships grew from 68 kids in 2017 to over 200 kids that filled Money Grove Park on October 12, 2019 and were able to compete for free. According to DiscGolfer magazine, the official publication of the PDGA, the event was the largest junior tournament in disc golf history. Kids from all over the country including Missouri, Texas, Oregon, and Nevada came to compete in Visalia and the club is hoping to do it again this year.

Every March, they work with the city of Visalia and the parks and recreation department to put on the Visalia Senior Games, the largest disc golf event for seniors (50+) in Tulare County. They also host Central Valley’s largest women’s disc golf event with nearly 70 participants back in 2019. This event is a part of the PDGA Women’s Global Event which has tournaments all over the world and will be returning this year on May 8-9.

In addition to running the Tulare County Disc Golf club, Parkison is also one of the most elite disc golf players to hail from Visalia. He began competing in 2007 and in 2012 he became Visalia’s first sponsored professional disc golfer with a sponsorship from disc golf manufacturer Legacy Discs. Between 2015 and 2018 he was a four-time back-to-back Central Valley champion between the Central Valley series and the CenCal series.

“I would travel around the United States playing in tournaments and seeing the cool things that other clubs have done, then bring those ideas back here to Tulare County,” Parkison said.