Tulare County DA announced Jon Gregorich, 46, was granted parole after being sentenced 15-year-to-life for a 1994 murder 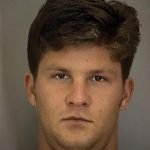 According to the district attorney’s office, a California parole board granted parole for Jon Gregorich, 46, who was convicted of murdering a young man outside a Visalia bar. The DA’s office stated in a press release that in the early morning of May 5, 1994, outside of the former Shagnasty’s bar in Visalia, Gregorich and two other men, Leo Sisco and Rocky Rodrigues, beat an 18-year-old man to death after a brief altercation. A friend of the victim said that he was unrecognizable after the beating.

Under Senate Bill 118, which was signed by the governor in 2020, inmates released on life parole can seek termination of parole requirements with the Division of Adult Parole Operations after 12 months.