Visalians consider taxing themselves to get rid of yellow fever mosquito which feeds almost exclusively on humans, carries many deadly diseases

VISALIA – An aggressive breed of mosquito is affecting the quality of life for many Visalians who have stayed indoors the last two summers to avoid being bitten.

The problem has gotten so bad the Delta Vector Control District, a special tax district which handles mosquito abatement for northwestern Tulare County, will decide this month if it will ask residents to pay more in property taxes to control the aedes aegypti mosquito, also known as the yellow fever mosquito.

Mir Bear-Johnson, assistant manager of the district, said unlike mosquitoes native to California, this smaller breed prefers to feed on human blood rather than animals and has adapted to its food. Native mosquitoes are much larger and prefer to feed on cattle, which have trouble swatting away the mosquitoes, while they take long drinks of blood. The aedes aegypti is smaller, so it is harder to see, and takes many tiny sips quickly and usually around the mid back or ankles. This makes them harder to swat and gives the appearance there is a swarm of mosquitoes, when in reality it might be one mosquito biting your ankles a dozen times. They also bite day and night, and not just at dawn and dusk, because humans are active at all hours.

“They are often called ‘ninja’ or ‘secret’ mosquitoes,” she said.

The Visalia City Council invited Dr. Mustapha Debboun, general manager of Delta Vector Control District, to its April 19 meeting to give a presentation on the issue after receiving complaints from constituents about the massive mosquito problem. Debboun said the mosquito first appeared in 2013 and carries deadly diseases such as yellow fever, chikungunya, dengue, West Nile and zika virus.

The invasive mosquito lives in urban habitats, lays its eggs just above the water surface in small containers such as flower pots, plant saucers, pet bowls, and bird baths. Debboun said the best way to deal with the mosquito is to dump and drain any standing water, be sure to avoid over watering your lawn and shrubs and check for leaks in sprinklers and drip lines.

“Not everybody dumps the water or follows the rules, that’s why we have the problem,” Debboun said. 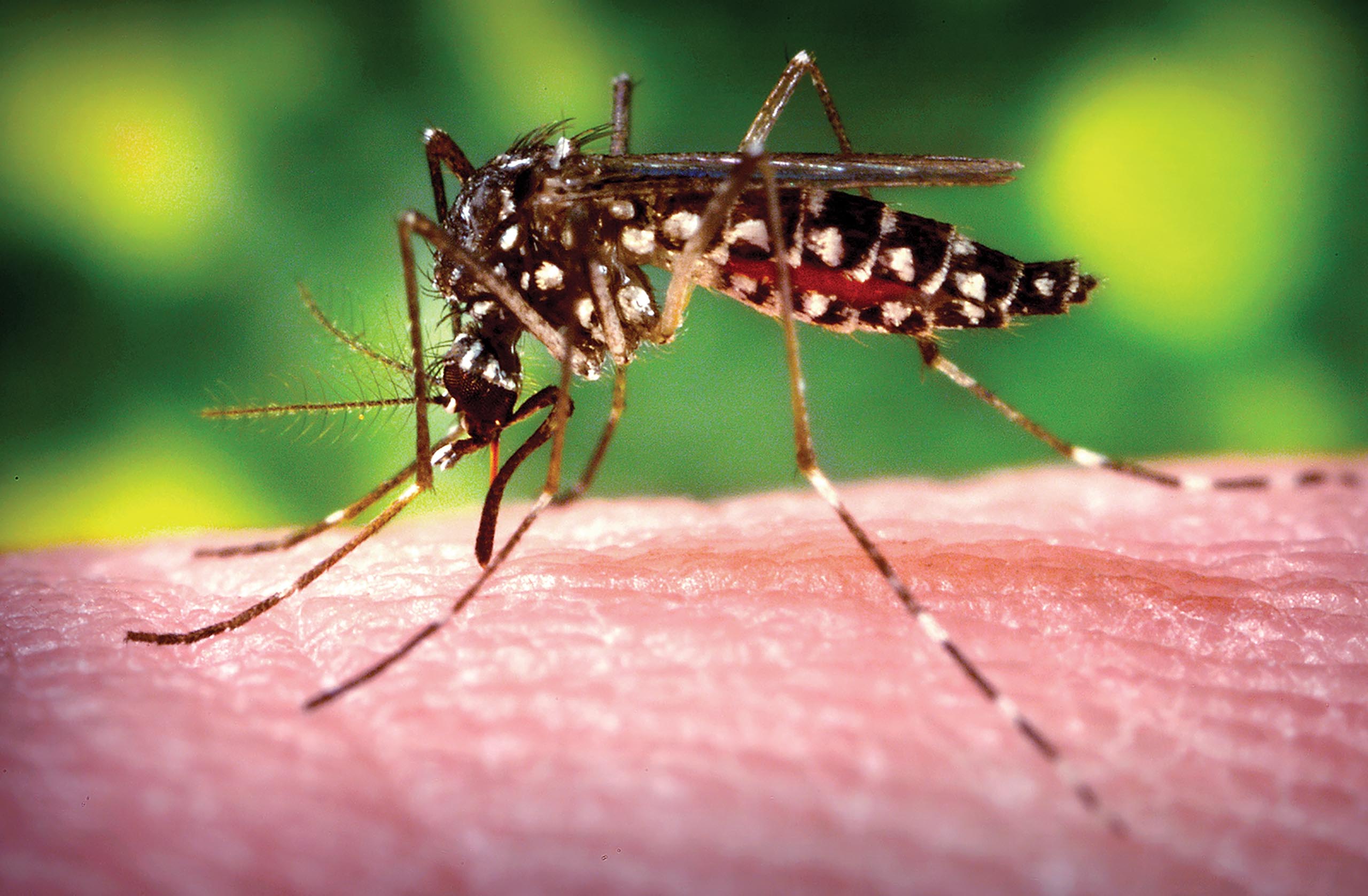 Councilmember Brian Poochigian said he agreed with Debboun’s claim the invasive pest was becoming a huge problem in Visalia. The councilman said he has lived in Visalia nearly his whole life and has never seen the pest problem as bad as it has been in the last two years.

“I’m scared to send my kids outside,” Poochigian said. “We can’t eat in our backyard, because we get eaten every time we go out. And I know I’m not the only household here, I received tons of emails about this.”

Several community members agreed with Poochigian during the public comment period of Debboun’s presentation. Ernest Cogan, who lives on West Vine Avenue in Visalia, said he has been overwhelmed by mosquitoes the last two years. He said the only difference he sees is that the district doesn’t spray insecticide as often.

“The last two years, I go outside, and they’re on me all the time, which they never were because they used to spray,” Cogan said.

Debboun admitted Delta Vector no longer does nightly sprays around storm drains and ponding basins because the adult mosquitoes are resistant to the poison.

Another Visalia resident, Kristen Butler, asked Debboun what the district was doing with the money they used to spend on spraying.

“How, in 101 temperature, are we supposed to go around in full clothing and try to do anything outside?,” she said. “You can’t even step out to your car.”

Debboun said the money for additional insecticides treatments was from a property assessment that began in 2009 to fund construction of a lab to test mosquitoes for diseases and bridge the gap between property taxes and operational expenses. He said the assessment lasted for 10 years and then expired in 2019, along with funding. The lab helped Delta Vector discover the arrival of the aedes aegypti mosquito in 2014 and test dead animals to discover the arrival of West Nile, Yellow Fever, and Zika virus in Tulare County. The lab also allows the district to breed mosquito eating fish which it offers free to property owners to put in ponds and water features to eat the larvae before they grow into chemically-resistant adults.

“I am not saying that we don’t want to spray … but it doesn’t really do anything, because it only adds to the problem of insecticide resistance [in adults],” Debboun said.

Currently, the district’s only source of funding is the original assessment which formed the district nearly a century ago, which amounts to about $8 per parcel once every two years.

Mayor Steve Nelsen questioned the need for additional funding if there is no need to spray and if staffing levels are relatively the same. Debboun said the assessment would be used to hire additional personnel to inspect homes for standing water, outreach to educate residents on how to protect themselves from the mosquitoes and the diseases it carries, develop and deploy innovative techniques to combat the emergence of the mosquito and to hire a technician to breed more mosquito-eating fish for the community.

“I do need additional people to go and do more surveillance and talk to the community, but I don’t have the money for that,” Debboun said.

Gil Torres said the mosquito issue has become a quality of life issue for both longtime and new Visalia residents. He did an informal survey on Facebook asking people throughout the city to share their experiences with mosquitoes in their part of town. He shared about a dozen comments with the council including people who had just moved to town who were eating up while taking out the trash, some who had so many bites they couldn’t sleep at night, others who have scars from the bites, and some who said they have considered moving out of Visalia because the problem has been so bad.

“This is at a crisis stage and our quality of life is being affected,” Torres said.

Poochigian asked what the district was going to do differently if they were successful in getting a tax increase if all he was proposing was to have residents get rid of standing water.

Debboun said the district is planning on using the money to respond to additional calls for service, educate the public on protecting their homes and themselves from mosquitoes as well as develop and deploy new techniques in combating the mosquito. He said there are new techniques already in use in other parts of the world making their way to the United States, including releasing sterilized males into the population to negate breeding, males that might carry a lethal protein or exposing the mosquitoes to low levels of radiation.

“The Environmental Protection Agency is looking into approving these new, novel techniques to help in the augmentation of managing disease invasive yellow fever mosquito,” Debboun said. “Once EPA approves them, then districts are going to start using them. But they’re going to cost a lot of money.”

In order to fund new employees, new education campaigns and new techniques, Debboun said Delta Vector is considering a property tax increase. He said the district randomly selected 16,000 residents in Visalia, Dinuba, Exeter, Farmersville, Woodlake and Cutler-Orosi to survey in the beginning of April. The survey asked if residents would support a yearly property assessment to help control invasive mosquitoes, such as Aedes aegypti, and monitor mosquito born illnesses, such as Yellow Fever and West Nile virus. Residents were also asked if they thought the assessment would help prevent future outbreaks of these illnesses, expand control programs, suppress the emergence of mosquitoes, educate residents on ways to protect themselves from the diseases, and if it will reduce the mosquito populations.

Results of the survey will be presented to the district’s seven-member board on May 12 which will then vote on whether or not to seek the assessment. Bear-Johnson said the board will consider increasing the property tax bills by either $8.24 or $12.50 per year. Their vote to move forward would trigger a Proposition 218 process which allows those owning property within the district to block the increase if 50% plus one property owner vote against it on a mailed ballot or sign a petition against it.

“I’m optimistic that the residents because they know this mosquito, especially the invasive yellow mosquito needs to be managed,” Debboun told the council.

Mayor Nelsen said questioned the timing of a tax increasing on the heels of one of the most devastating health and financial crises in the nation’s history.

“If I was just impacted with COVID, I lost my job, or furloughed, and I get a survey in my mail that says I’d like to increase your tax assessment, what do you think the answer would be?,” Nelsen asked.

Debboun said asking the public to remove standing water is obviously the most inexpensive and effective way of handling the situation, but people don’t have enough time to deal with it. Instead, he said providing additional funding to the Delta Vector Control District would not only help educate residents on how best to protect themselves but also develop more effective treatments when district employees respond to calls for mosquito abatement.

“It’s a big issue here and we’re here to work together to solve it,” Debboun said. “Partnership, community engagement, education, and source reduction will help get us to where we need to go.”