VISALIA – Youth smoking and vaping, the cause of the majority of Visalia Unified School District’s (VUSD) 639 suspensions in the 2018-2019 school year, was hotly debated at the May 17 city council public hearing on the district’s appeal of the Planning Commission’s approval for smoke shop PRD Cigarettes to operate just 400 feet from Houston Elementary.

There was some confusion on the matter, however, as PRD Cigarettes is not a new business—Balwant Dhaliwa, the owner, has operated PRD Mini Mart at the same location, 1410 W. Houston Avenue, for years, where he’s sold tobacco and alcohol. Dhaliwa closed shop in November 2020, and is now dropping the alcohol sales, triggering more than 30% of gross sales or net lease area coming from tobacco and the need for a conditional use permit for a “smoke shop,” which is why the issue went before the Planning Commission.

Cristobal Carrillo, associate planner with the city of Visalia, said in addition to VUSD’s letter of appeal, the city did receive additional complaints from two residents of the area north of the proposed smoke shop, concerning the smoke shop having a negative influence on the student populations and the potential for increased crime in the area. 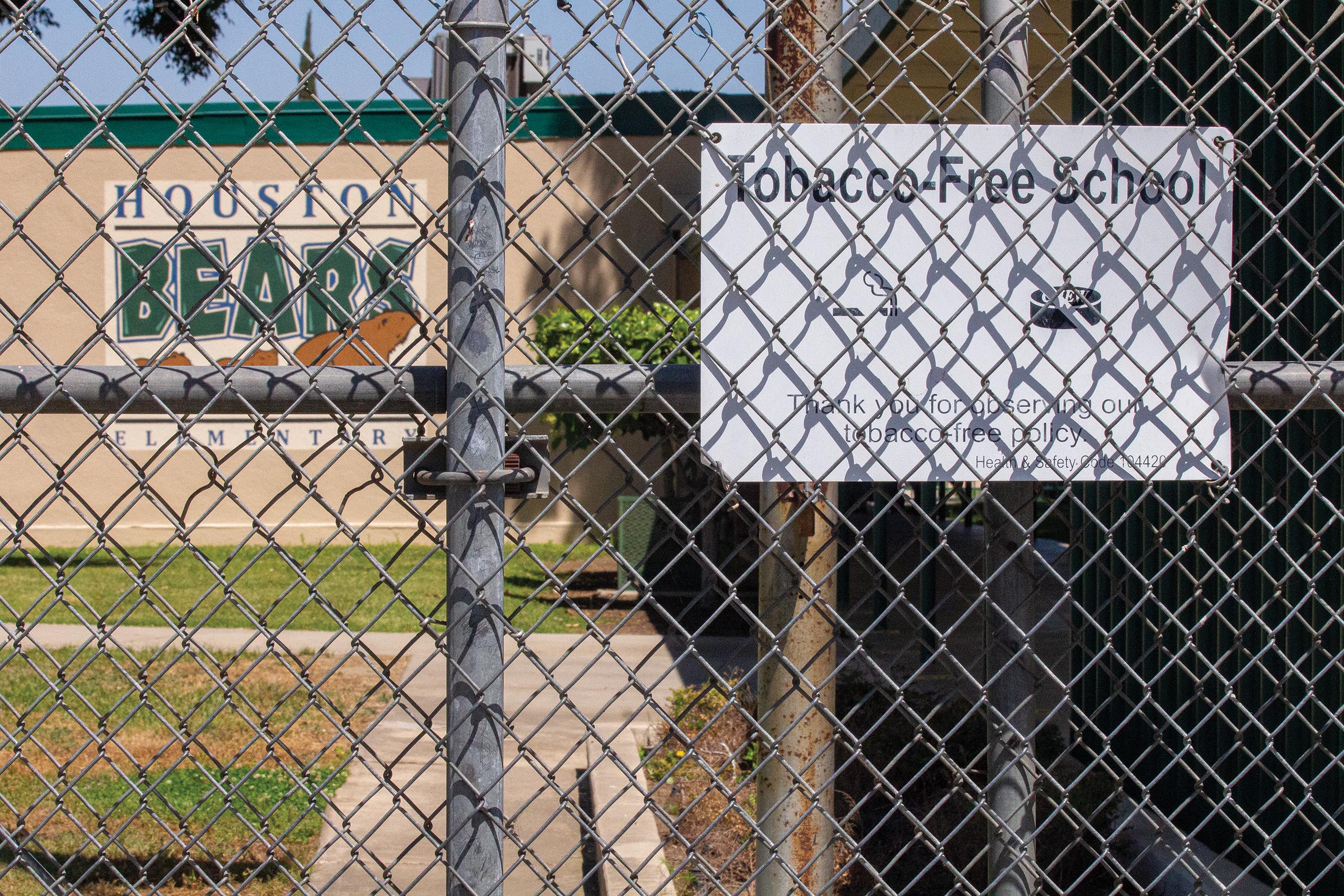 Houston Elementary and PRD Smoke shop are the two parties in a conflict over tobacco’s proximity to schools.Photo by Ben Irwin

Visalia resident Amanda Wright, who’s backyard backs up against the minimart, spoke out against PRD Cigarettes. She said she’s had problems with crime and homelessness in relation to the old business at the location, and that PRD Cigarettes would not be an improvement.

“They do sell to minors, I’ve seen it done,” Wright said. “He will sell to the homeless who will hand the minors their alcohol, tobacco or whatever he is selling.”

Vincent Salinas, an independent contractor who came in support of the business owner of PRD Cigarettes, said the council ought to consider banning donut shops instead because of “the high diabetics and families and so forth.”

“Last Thursday afternoon, there were more kids hanging out at these cheap donut shops than the other businesses,” Salinas said. “You’re going to ban donut shops where all these kids hangout. It’s critical that school districts and other agencies start to do that, because it is a bad health issue.”

Betty Odell, who volunteers at Houston Elementary with her husband through the Visalia Lions Club, said that because there is no bussing for kids to Houston Elementary, many of them walk to school, right by what would be PRD Cigarettes.

“They’re just exposed to so much of the vapor and all of the tobacco products,” Odell said. “I would like you to consider policies that restrict how close to schools tobacco retailers can be located. To me, 1000 feet is not enough.”

A representative of VUSD did not comment during the public hearing. Council member Brett Taylor asked for clarification on what the sufficient measures to limit the overall exposure smoking in public areas were outlined in the city code.

“The way the code is written it says you can’t smoke in these certain public spaces, stores and schools. It also provides a rule saying if you see a minor smoking, whether it’s in a public space or on the street, that can be cited for that—not cited, I should say, but they’re not supposed to do that,” Carrillo said. “Through those limitations, exposure of any sort of smoking is expected to be reduced for any kid just passing by the store.”

Council member Taylor noted that it’s common in many cities to have a minimum distance certain businesses must be away from schools in the municipal code.

A quick Google search from Carrillo on his phone not confirming or denying any legal distance requirements from the state or local jurisdictions, an undisclosed smoke shop that’s allegedly closer to El Diamante High School, and a question to Visalia Police Chief Jason Salazar about reports of underage selling at the location—to which the answer was “It’s certainly possible, but without running some data and pulling some reports, I can’t answer that”—was the extent of the research done to answer the council’s questions on the proposed PRD Cigarettes location.

Linda Baggio, a Visalia resident and the Adverse Childhood Experiences Aware Program Manager for the California Health Collaborative, penned a letter to The Sun-Gazette in favor of protecting Visalia youth from tobacco retailers. She said 51 California cities have adopted policies to protect youth from being exposed to and having easy access to unhealthy products such as tobacco, including Selma, who has banned tobacco retailers from locating within 1,000 feet from schools, playgrounds and other youth-sensitive areas.

‘More cities should step up to protect youth in their communities, and that city should be Visalia,” Baggio said. “Even though the majority of people in California do not smoke, tobacco retailers—combined with an excessive amount of advertising and availability of tobacco—create an image, particularly among youth, that tobacco use is still the norm.”

Council members Brian Poochigian and Taylor both expressed their concerns that the proposed smoke shop is way too close to Houston Elementary, and echoed the notion for staff to visit the idea of establishing a minimum distance policy for alcohol and tobacco businesses. However, council member Taylor moved to deny VUSD’s appeal due to the bad precedent it sets for business owners in Visalia.

“I think it’s really bad policy to say we’re doing something because we feel like it,” Taylor said. “I don’t think that’s what council members should be doing. We should be following our municipal guidebooks, and that’s what I’d like to see move forward.”

“When you’re processing the conditional use permit, you can evaluate the immediate neighborhood and what impact the use may have on it,” Collins said. “I am not going to support the Commission’s decision on this matter, and would welcome a future ordinance that precludes these kinds of uses in close proximity to our schools.”

In an interview with The Sun-Gazette, council member Taylor said in light of the business owners previous sales of alcohol and tobacco, it seemed like the best decision to at least limit the business owner to just tobacco rather than approve VUSD’s appeal, and have Dhaliwa be able go back by right to selling both near Houston Elementary.

“[The land] was already zoned commercial, which means he had the right without city council or planning commission approval to have a convenience store there, which he’s had for many, many years,” Taylor said. “We’re going to change that policy [on proximity to schools] and hopefully make it so this can never happen again in the future.”

With Mayor Steve Nelsen and Vice Mayor Phil Cox absent, the motion to deny VUSD’s appeal and uphold the Planning Commission’s approval of the conditional use permit for PRD Cigarettes passed 2-1, with Collins as the sole opposing vote. The council also directed city staff to return at a later date and review policies currently in place to make sure situations like this do not happen in the future.

“I completely understand why the residents and the school are upset about this situation,” Taylor said. “We should have done a better job of making sure it didn’t happen in the first place.”