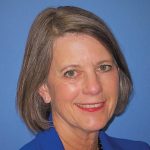 On June 7, the Visalia City Council announced its unanimous vote to make current assistant city manager Leslie Caviglia the first regularly appointed female city manager in the city’s history. The announcement came at the top of the regular session portion of the meeting.

“We had an extensive recruitment process with a number of qualified applicants,” Mayor Steve Nelsen said. “Ultimately, we knew that Leslie’s extensive knowledge and commitment to this community were the fit we were looking for. We are confident she will lead the City forward as we create and implement a solid vision for the next decade and beyond.”

Caviglia has served as assistant city manager since 2013 after serving as deputy city manager from 2004-2013. She began her career as the communications director in 1986 and later city clerk, a position which at one-time served as a chief of staff to the council, before leaving the city in 1994. She came back to city government in 2003 as a consultant before returning to city administration the following year. In her more than two decades with the organization, Caviglia has worked alongside five of the City’s 11 city managers, supervised 12 different divisions and has worked with 24 Council members.

“It is an incredible honor to be selected by the City Council as the next Visalia city manager,” shared Caviglia. “We have an incredibly talented and committed workforce and I look forward to working with them to serve our citizens. I am committed to the long-term success of our diverse community, and am honored, grateful and eager to serve.”

The city council will officially confirm Caviglia’s appointment and swear-in the new city manager at a future council meeting.

Caviglia will succeed current city manager Randy Groom who announced he will retire on Sept. 1, marking the end to a 35-year career in public administration, including 22 with the city of Visalia. When he succeeded Mike Olmos as city manager after his retirement in 2017, Groom oversaw Visalia through some of its most financially stable years following the passage of Measure N in 2016. He will likely finish his career having navigated the city through the country’s worst public health crisis since the influenza pandemic a century earlier. He said the hardest decisions he made as a city manager, either in Visalia or Exeter, were personnel decisions.

Prior to becoming city manager for Visalia, Groom held the same position in Exeter from 2010-2017. During that time, Groom helped the city of Exeter navigate the Great Recession without increasing sales tax and helped fill vacancies created by the departure of long-time department heads and employees.