VISALIA – One toddler lost her life in perhaps the worst way possible: she was trapped in a hot car while her mother tended to illegal marijuana grow for three hours. 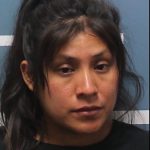 Last Thursday, Eustajia Dominguez Mojica, 28, the mother for the deceased toddler, was arrested for involuntary manslaughter. Several others were arrested as well.

According to the Visalia Police Department, at 5:47 p.m., officers and emergency services personnel were dispatched to the 100 block of West Perez regarding a 3-year-old, later identified as Jessica Campos, who was not breathing after being left in a parked vehicle. An officer was on an unrelated call across the street from the residence and was on scene within seconds. The patrol officer took over CPR duties from family members who were trying to revive Jessica.

Once the Visalia Fire Department and ambulance personnel arrived on scene, they took over life saving measures. Jessica was transported by ambulance to Kaweah Health Medical Center, where she was pronounced deceased.

The violent crimes unit responded to take over the investigation. Based on statements obtained by detectives, it is believed that Jessica was left in the vehicle for two-and-a-half to three hours prior to being discovered. The outdoor temperature was determined to be at least 100 degrees at the time of the incident.

Statements obtained indicated that Jessica’s mother had been tending to a marijuana grow and processing marijuana during the time the child was left in the vehicle. The narcotics unit and the special enforcement unit were contacted to assist in the investigation for the marijuana related concerns.

District Attorney Tim Ward announced criminal charges on Monday, June 7. According to Ward’s announcement, Dominguez Mojica is charged with child abuse and the special allegation of willful harm or injury resulting in death, involuntary manslaughter, conspiracy to commit a crime, two misdemeanor counts of child endangerment, misdemeanor possession of marijuana for sale, and misdemeanor planting, harvesting, or processing of marijuana. Dominguez Mojica was arraigned Monday afternoon where her preliminary hearing was set for June 15. If convicted, she faces 10 years in state prison.

“While we can all agree that the ultimate punishment cannot fit the tragedy that occurred here, California law draws a clear distinction between negligent acts and malice with regard to a possible charge of murder,” Ward said. “The case will continue to be investigated and I strongly urge anyone with more information to contact the Visalia Police Department.”

According to the DA’s press release, each of those who were arrested were also charged with varying crimes related to child endangerment and drug crimes.