City attempts to sell half of buildings at Sonic Plaza, renovate the others which have remained unfinished shells since being built in 2008

VISALIA – The word sonic brings to mind a speeding hedgehog, fast service and things traveling at the speed of sound, but in Visalia there is nothing expedient about the Sonic Plaza project.

“This thing is like the never ending story,” Mayor Steve Nelsen said. “It started in 2014 and just keeps coming back.”

Nelsen was referring to the city’s purchase of four office buildings across the parking lot to Sonic Drive-In and adjacent to Visalia Transit’s Maintenance and Operations Facility at the corner of Goshen Avenue and Cain Street. In addition to purchasing the property, the city also spent $25,000 in 2018 to investigate what would be required to bring the buildings up to current code. Three years later, city staff asked for another $50,300 from the council on June 7 to parcel the property into two properties, with two of the four buildings being designated surplus property for sale and the other two being renovated as office space for city departments. 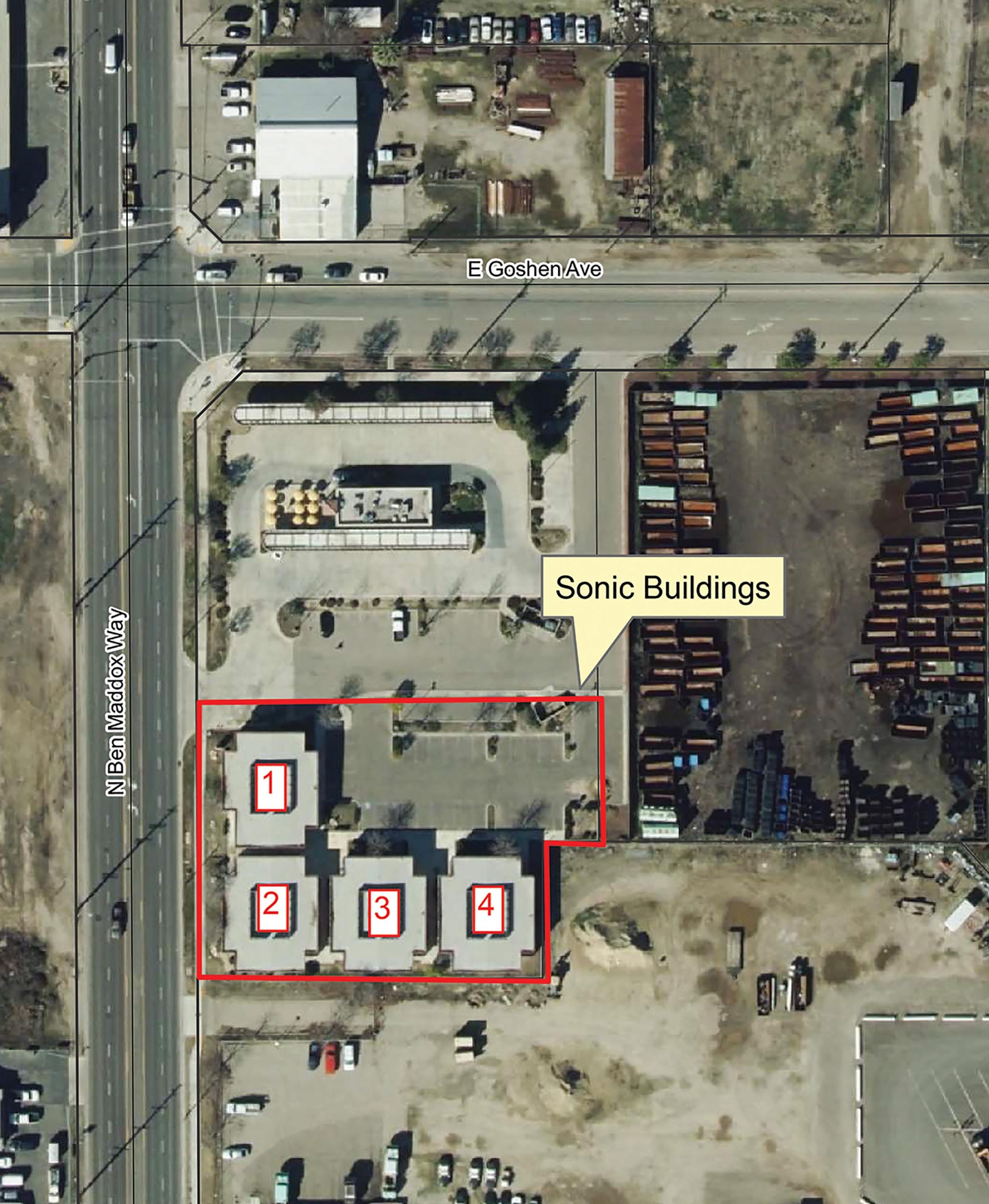 The buildings, listed as 442, 444, 446 and 448 N. Ben Maddox, were built in 2008 when the Sonic Drive-In fast food franchise was built and have never been occupied.Aerial image courtesy of Google.com

Public Works Director Nick Mascia said the money would be used for a design consulting fee, construction estimate, staff management and a 10% contingency to prepare two of the 3,000 square foot office buildings for sale. Back in 2018, the city had proposed remodeling some or all of the buildings to house its Public Works Department’s administrative offices and temporarily house the finance department until a new, larger civic center/city hall can be built to consolidate most city offices under one roof. The project got lost in the council’s arguments over whether the city should build a new city hall, community center, public safety headquarters or an aquatic center. In 2019, the city council ultimately prioritized a police headquarters over all other uses, possibly pushing back plans for a civic center out 20 or 30 years. The public safety building will include a new city council chambers and could house additional city departments, primarily the finance department, but staff is still investigating possibilities to consolidate offices and sell off excess office space to offset the cost of building a new police headquarters.

“It has been on the back burner and is now moving forward slowly,” Mascia said.

The buildings, listed as 442, 444, 446 and 448 N. Ben Maddox were built in 2008 when the Sonic Drive-In fast food franchise was built. The buildings have never been occupied since the initial construction. The city would have to develop the interior of the buildings as only the exterior was complete when construction ended in 2008.

Mascia said the only way to move forward with plans to utilize the city-owned property was to split up the buildings into two parcels.

“This is the first domino in order to get those two buildings ready for use,” Mascia said.

Nelsen was the most vocal proponent of building a police headquarters prior to a civic center, community center, aquatic center or any other type of center, a vote which narrowly passed with support from other councilmembers Brian Poochigian and the now late Phil Cox. He chided the other councilmembers for asking staff to juggle too many ideas instead of just focusing on projects they could complete, such as the stagnant Sonic Plaza project.

“Quit jerking everyone around,” councilman Nelsen told his fellow councilmembers in October 2018. “You’ve got our staff working on three different projects and we’re just idling. At some point you’ve got to put it in gear and move ahead.”

The council unanimously approved the Sonic Plaza project budget of $50,300 on a 4-0 vote as councilmember Brett Taylor was absent.

“This building has been empty forever,” Nelsen said. “Does anyone know the last chapter? When will this story end?”