VISALIA – Soccer enthusiasts are increasing in the Valley each year but so are triple-digit days, it seems. There are also not enough fields to house youth and adult leagues, youth practices, pick up soccer matches and family games. With freezing temperatures during the winter and high heat in the summer, locals need a climate controlled place to enjoy their sport year-round.

Owned by a group of local soccer experts, Soccer City—1852 Visalia is developing a 3.5 acre parcel at the southwest corner of North Johnson Street and West Murray Avenue as a soccer complex. An existing 28,500-square foot metal building will be renovated and remodeled to house two indoor courts for soccer with seating to watch, a micro-brewery and tap room, and a banquet room for special events, according to the conditional use permit approved by the Visalia Planning Commission on June 28. The artificial turf courts are “street style” meaning they are smaller than traditional soccer pitches to accommodate 5-on-5 pickup games, similar to public basketball courts. The 50 feet wide by 80 feet long courts promote a style of play popularized in metropolitan areas where space is limited. The indoor fields would be similar to those found at McDermont X in Lindsay. The indoor courts would cater leagues where players can join for a nominal fee and play eight or nine games in a 10-week window. 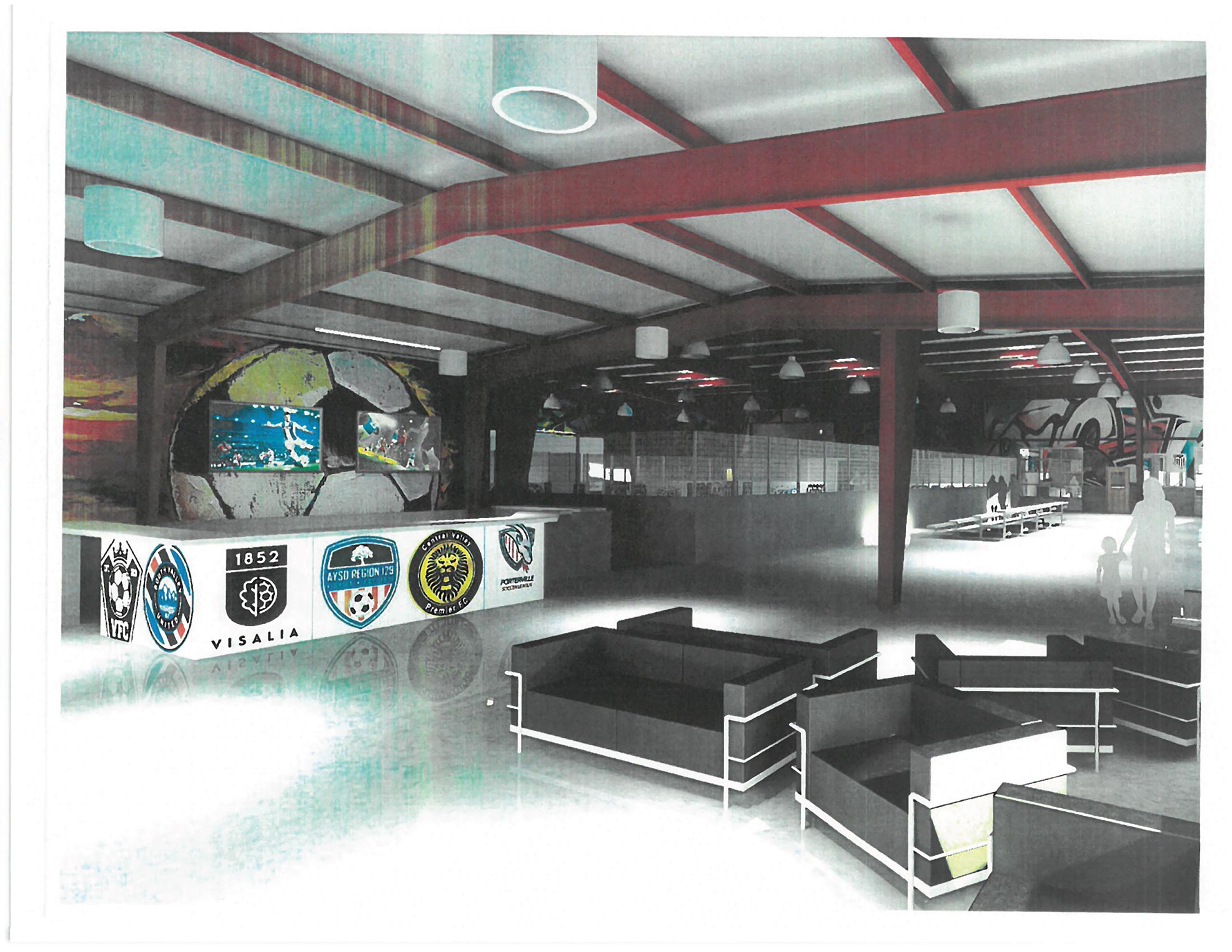 Soccer City, a 28,000-square foot sports complex planned for the corner of Johnson Street and Murray Avenue, will include two 50x80-foot indoor soccer courts for year-round play (above) and a 2,000-square foot microbrewery and taproom (below).Renderings courtesy of Soccer City - 1852 Visalia 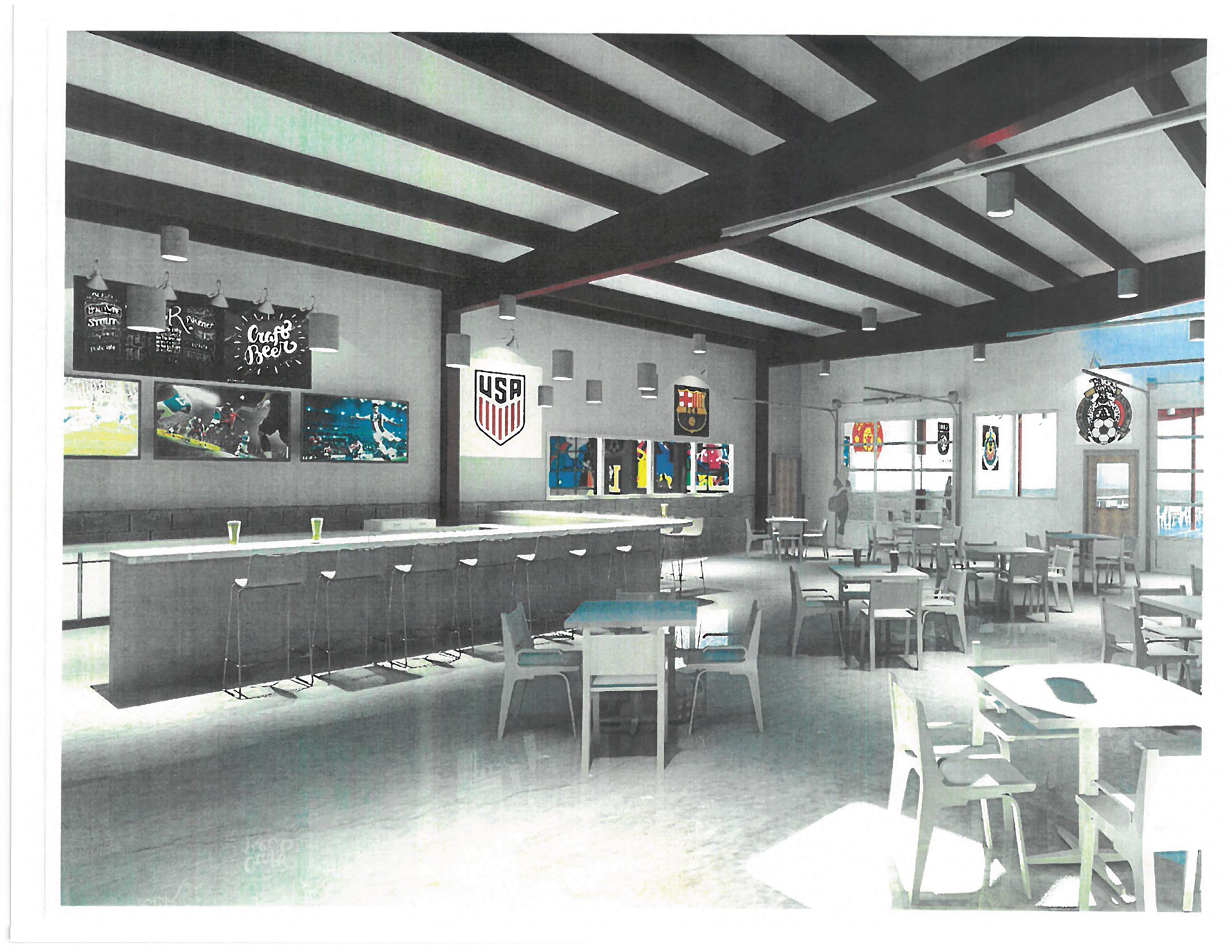 The micro-brewery and taproom will operate similar to Barrelhouse Brewing Co. in downtown. Soccer City would be operating under an Alcohol Beverage Control (ABC) type 23 license which allows those under age 21 to be in the taproom if they are accompanied by an adult, the business offers games and activities and non-alcoholic beverages and snack food and the minors don’t sit at the bar or serving counter. Soccer City will have a 2,000-square foot brewing area and a 2,000-square foot taproom and biergarten for selling and serving beer brewed onsite. The taproom and biergarten areas will have foosball and cornhole for minors with some acoustic and single-performer live music.

The planning commission’s discussion of Soccer City’s permit centered around the 8,300-square foot outdoor area of the complex featuring a 50- by 80-foot turf field. At night, the outdoor field would be lit up by four 18-foot tall light poles. The facility will shut down outdoor play at 10 p.m. and turn the lights off at 11 p.m. for clean-up and maintenance.

Cristobal Corrillo, associate planner for the city of Visalia, said outdoor field’s lighting could be as high as 10.8 lumens, the amount of light radiating from the light poles, far exceeding the city’s existing standard of 0.5 lumens.

Corrillo was recommending the commission add a condition to the permit that the facility shall not produce glare into neighboring properties of more than 0.5 lumens at the property line. Prior to allowing Soccer City to open, Corrillo said staff would do a nighttime inspection to verify the facility did not exceed the standard if the commission approved the condition.

Representing Soccer City was Bill Cummings, former partner in the ownership of the professional sports franchises in the Fresno Grizzlies and the Fresno Fuego, who requested the proposed lighting to remain without condition because it had already been purchased. Cummings said the lighting for the outdoor field was part of a kit specifically designed for that size of field and changing it would come at a significant cost to the ownership. Designed by Boise-based Urban Soccer Park, the kits include a scoreboard, the walls, the turf, and then in this particular case, the LED lights that are going to be focused and shielded down towards the soccer field itself.

Cummings said there will be netting around the perimeter of the court, landscaping and solar shades which will all provide some light reduction.

Commissioner Marvin Hansen asked if the lights could be focused downward on the court to eliminate as much glare outside of the property as possible.

Cummings said the light poles will have some integrated anti-glare shielding to absorb glare and redirect light back onto the field. He said his group was looking into increasing the size of the shielding and the possibility of lowering the lights and shields closer to the field.

Commissioner Mary Beatie motioned to approve the conditional use permit including the condition restricting light spillage to 0.5 lumens at the property line.

“I would be reluctant to approve this without the requirement that they at least meet ordinance requirements,” Beattie said. “From an enforcement standpoint, that would put the city in the best position.”

Commissioner Hansen amended the motion to approve the permit without the condition restricting lighting at the property line. Beattie seconded the motion allowing light to exceed the standard along Johnson Street, where there is only a commercial use property, but holding the facility to the standard on Murray Avenue where it faces buildings with residents. Hansen agreed and the motion passed 4-0 as Adam Peck was absent from the meeting.

“I want to compliment you on developing property that’s been an eyesore for many, many years in the city,” Hansen said. “I personally appreciate it and I’m sure the community does, too.”

The outdoor area will also include a 99-stall parking lot, a snack bar and room to accommodate food trucks to offer more meal options for patrons.

“Special events and concerts will not be part of the facility’s primary objectives;” the operational statement read, “however, special event permits may be requested for these uses on an occasional basis should the opportunity arise.”

Soccer City will be staffed by approximately 10 full-time employees each day. Normal business hours will be from 4 p.m. to 10 p.m. weekdays and 8 a.m. to 10 p.m. on the weekend. Soccer City is located at 707 W. Murray Ave. in Visalia.

Anyone interested in getting more information about Soccer City 1852 Visalia can contact Jeremy Schultz by emailing [email protected] or visiting www.1852visalia.com to be added to their database for updates on the project.