VISALIA – Firefighters are primarily known for putting out fires but they actually spend most of their time responding to calls which don’t involve flames at all.

Over the last six years, fire calls only make up about 4% of all calls for service (including police and emergency medical service calls) to public safety dispatch within the city limits. In contrast, medical aid calls, those requiring the skills of paramedics, make up more than two-thirds of all calls for service. With call volumes on pace to continue to increase this year, the Visalia Fire Department launched its new Emergency Medical Services (EMS) Unit over the summer.

Fire Chief Dan Griswold said members of Squad 51, the city’s EMS unit, have similar training to firefighters who are also paramedics, but have not had any fire training. The unit supplements VFD’s emergency medical response provided by fire engines and ladder trucks and helps maintain medical aid coverage during times when engine and truck company crews are assigned to larger, resource heavy incidents like structure and wildland fires, hazmat incidents, vehicle accidents, and during those time when the city has multiple EMS incidents occurring at the same time. Additionally, the EMS unit provides coverage to the city when engine and ladder personnel are assigned to public education events, training, and a variety of other tasks. 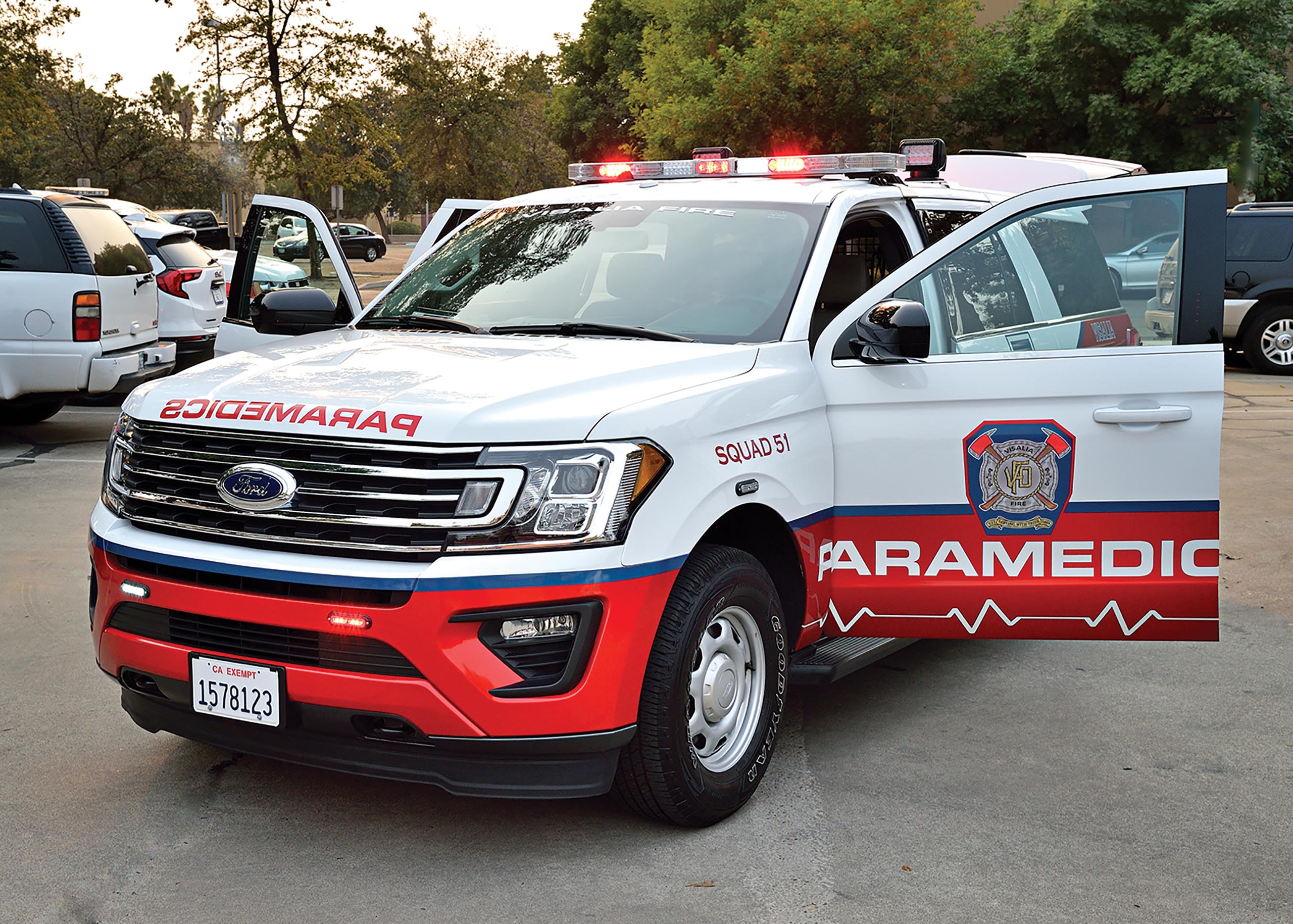 “If there is a major event, where all of the firefighters are responded to a large fire, this unit will continue to respond to medical aid calls through the city,” Griswold said.

Ryan Munger, who was hired in April 2020 to oversee the unit, said the unit’s first day was on June 7, 2021, almost two years after it was approved by the council as part of the biannual Measure N budget. As EMS coordinator, Munger manages the squad, facilitates and provides EMS training, purchases and tracks narcotics administered on the rig, and serves as a liaison to the Kaweah Health Emergency Department and the Central California Emergency Medical Services Agency, which oversees ambulance providers in Tulare County, as well as Kings, Fresno, and Madera counties. He is also tasked with was hiring to recruiting and was unable to find enough people interested in the positions. A nationwide shortage of paramedics, the ongoing pandemic, and the newness of the unit conspired against filling all of the positions in the last two years.

“These are paramedics who are part of the fire department but are not firefighters,” Munger said. “Some of them may aspire to be firefighters and this may help them get their foot in the door.”

The unit currently has three paramedics who rotate on a 10-hour per day, five-day workweek to ensure there are at least two paramedics on duty to respond to calls during the day. EMS calls are less random than fire calls and most medical aid calls are for heart attacks, strokes and vehicle accidents, things that typically occur during the day when people are more active, and lately, the unit has seen an increase in drug overdose situations.

Named Squad 51 because it is based at Fire Station 51, 309 S. Johnson St., the EMS unit can be strategically deployed throughout the city from the central location. Squad 51 responds using a converted SUV. The smaller vehicle will not only be more agile in maneuvering narrow downtown streets and alleyways but it is also cheaper to maintain than a light engine. While the vehicle is staffed by paramedics and stocked with medical supplies, it does not serve the same function as an ambulance because it will not transport patients.

“In some cases, this unit may respond quicker than an ambulance and then hand-off the patients to the ambulance for transport after they have been stabilized,” Griswold said.

Squad 51 is being funded through the fire department portion of Measure N, the half-cent sales tax approved by Visalia voters in November 2016. With Phase 1 of the plan complete, Munger said the city has already made plans to add a second EMS unit by June, including three more paramedics and an additional vehicle.

“I think the next recruitment will be less challenging,” Munger said.