VISALIA – A Christmas classic is in town, and director Kelly Ventura “triple dog dares ya” to join the Visalia Players as they present A Christmas Story at The Ice House Theater.

Based on the 1983 movie, A Christmas Story follows young Ralphie Parker as he asks Santa Claus for “an official Red Ryder carbine-action 200 shot BB gun” complete with “a compass and this thing which tells time built right into the stock.” Ralphie pleads his case to anyone who will listen, even Santa Claus himself, only to hear the infamous words: “You’ll shoot your eye out!” All of the elements from the movie are featured in this show, including the leg lamp, the infamous “Oh, Fudge!” scene, the family’s temperamental furnace, and more.

“Being a child of the 1980s, I grew up watching the movie on VHS and wore out the tape.” Ventura said. “I was known to watch it during August. The movie lines have made their way into our family and we use them regularly. So, when the opportunity came along to do this show again, I jumped at it.”

With only eight weeks of rehearsals, this cast was able to nail down the most memorable scenes from this movie. Cast members have shown excitement to get the show on the road, some hitting the stage for the first time since COVID-19 sidelined theater performances in 2020.

“I am impressed with the progress they’ve made,” said Ventura. “We have some actors that this is their first time on stage, but I’m inspired by their abilities and talents. And I also enjoy watching our adults with significant stage experience internalize and develop their characters.” 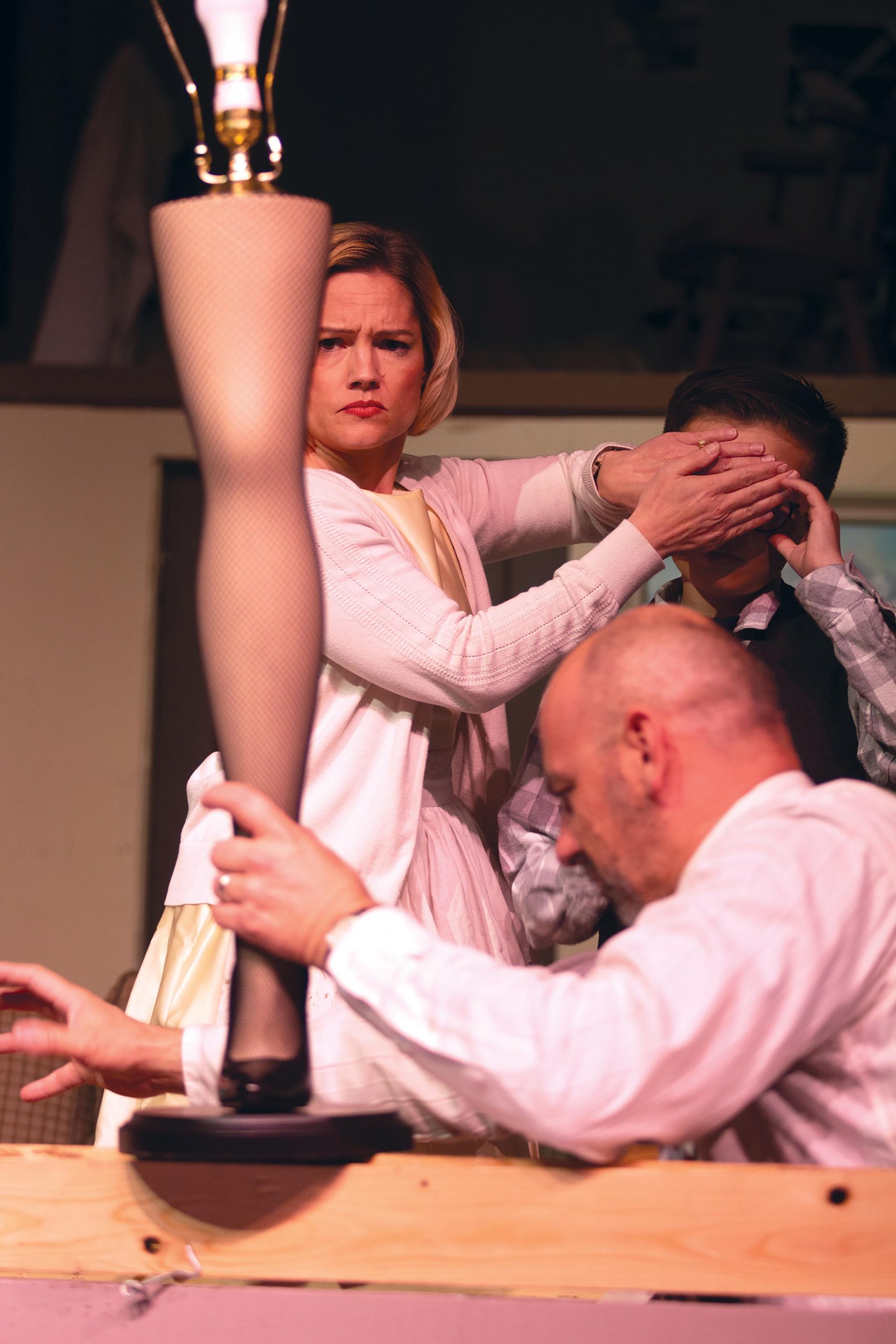 The Visalia Players are presenting A Christmas Story with memorable moments like this, where Ralphie’s mother covers his eyes as his father proudly displays his “major award” in the window. Showtimes are on Dec. 10-12 and 17-18 at the Ice House Theater in Visalia.Photo by Brianda Lemus-Ceballos

This season, different age ranges bring joy to the community as they play a character they may or may not connect with. Henry Van Gemert, 13, is cast as Ralphie, and Nicolas Simpkins as Flick and Desperado. Both said they are excited to perform for the community and their families in the audience.

Simpkins is joined by his father, Bob Simpkins, who is making his very first ever appearance on stage. The elder Simpkins is cast to play several characters including Santa Claus and Mr. Bumps.

“This is my first play ever except as an audience member,” the father said. “But I can tell you for example my son who plays Flick has not been in a play in two years and he’s been very excited and waiting for the chance.”

Priscilla Solario, 11, is excited to make her theater debut as well. Her character, Helen, is the one of three popular kids in school, with good grades and very well educated.

“My character, she’s very sassy and very tough and all the boys respect her and he’s very smart,” Solario said. “I love it. Everyone’s super nice here. I’ve made a bunch of friends.”

Tami Mason, cast as Mrs. Schwarts, said this is her favorite movie to watch every year.

“This is an absolute holiday must,” said Mason. “This is the only movie I’ll watch in [the summer] for ‘Christmas in July.’”