Too many large dogs wondering the streets have pushed the Visalia Animal Care Center to capacity; may have to begin euthanizing dogs

VISALIA – The Visalia animal shelter is at capacity, meaning animals, mostly dogs, may need to be put down to make room for others.

Animal services supervisor Ivy Ruiz is doing everything in her power to prevent that from happening but needs the public’s help to find homes for a growing number of dogs, especially large dogs.

“We are asking for help our shelter is full,” Ruiz posted on the facility’s social media on Jan. 4. “If you’re interested in adoption or rescue please contact shelter. We need our community help.

Many of the animals being posted to the site appear to be pets without collars or microchips. Some of them were just puppies. In one case, a local resident died, leaving his quartet of large dogs without a home.

Ruiz said she isn’t sure why there are so many dogs coming into the shelter because the surrender and lost dogs have not increased. She said most of the dogs are large dogs and are strays. She suspects people are breeding them and then putting the ones they can’t sell onto the street.

“They are programs to help people with food, adoption programs, rescue organizations, etc.,” Ruiz said. “With all of these options, we don’t know why there are more dogs on the streets right now.”

She did say many popular large breed dogs are clever breeds who are curious and like to explore. She said German shepherds, huskies and pitbulls are the most common breeds that stray from a home.

“They are the escape artists,” Ruiz said.

These breeds are also the most difficult to adopt. Large dogs require large yards for exercise, eat more, need to be walked often and can be a handful indoors when left unattended, especially during the puppy phase. Small to medium sized dogs are less likely to need a yard, eat less and it is easier to find places for them to sleep indoors where they will do the least amount of damage.

While Visalia Animal Care Center isn’t a “no kill” shelter, Ruiz said city staff does look at euthanizing as the last option. As dogs come into the shelter, staff looks for signs they belong to someone, such as collars, licensing and microchips. If they seem socialized, staff begins putting out information on the dog, such as posting photos and descriptions on social media, asking if it is a lost dog. The next option is finding them space with an animal rescue organization or foster home or adoption. Animals are only euthanized after the facility has exhausted all other options and only if they are out of space. 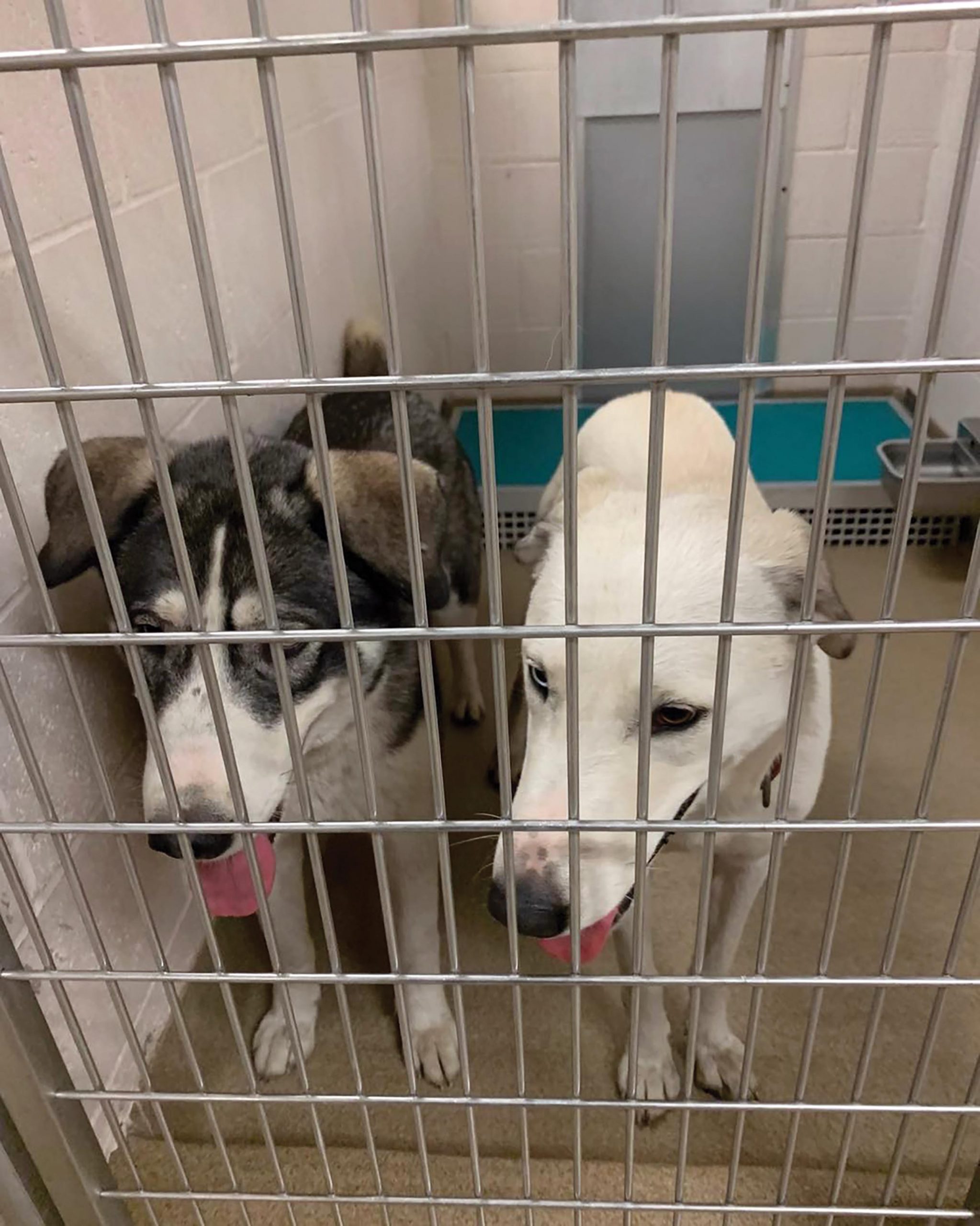 These two large dog breeds were found together on Jan. 4 in Visalia. The Visalia animal control shelter is at capacity due to the large, daily intake of large dog breeds.Courtesy of Visalia Animal Care Center

“We haven’t had to euthanize due to space in over three years,” Ruiz said. “We hold them as long as we can to produce a positive outcome.”

Caring for a large number of large dogs not only takes up more space in the kennels but more staff time. That’s also an issue as the Visalia Animal Care Center is operating at half its normal staffing levels. As of last week, the animal care center was still experiencing a “large intake daily” of large dogs. In response to being overcrowded and understaffed, Ruiz said her department has lowered its dog adoption fee from $150 for females and $140 for males to a flat fee of $100 for large dogs. She said she hopes the reduced fees will encourage more people to consider adopting a large dog in need of a home.

“We still have a large volume of large dogs,” Ruiz said. “We hope people will be able to help in some way.”

So far, the public has responded to its calls for help. Visalia Animal Care Center adopted out 20 dogs last week, nearly matching the yearly total of 30 adoptions per year.

Those who unable to adopt are asked to volunteer at the shelter, like and follow local shelters on social media to broaden their reach for lost or adoptable dogs, donate needed items such as towels and toys, even just making sure your own pets are properly identified and at the very least say thank you to those who work at their local shelter.

“Usually with limited resources and very little publicity, they help untold numbers of animals and people,” a Jan. 7 post on the shelter’s social media read. “Give back by choosing one or more of the following ways to show your appreciation for the groups that do so much for animals, people and your community.”

The Visalia Animal Care Center is open from 8 a.m. to noon by appointment only and from noon to 4 p.m. for walk-ins Tuesday through Saturday. To make an appointment call 559-713-4700. The center is located at 29016 Highway 99 in Visalia.

The problem is not unique to Visalia, as the city also provides animal control services for other cities, including Farmersville, Exeter and Dinuba. A similar situation has developed at Tulare County Animal Services, which handles stray animals, pet adoption and others for all unincorporated areas of the county.

Carrie Monteiro, spokesperson for the county shelter, said their facility has also seen an above average influx of large dogs to the shelter and is at or near capacity depending on the day. Tulare County Animal Services has gone so far as to reduce its fee for adopting large dogs from $100 to just $20.

The “Live Large—Adopt a Big Dog,” part of the Best Friends Animal Society’s campaign, will run from January 15 to 31 to rally and encourage residents interested in a new pet to consider adoption. Adoption fees are just $20 at Tulare County Animal Services for all large-breed adult dogs. Adoption fee includes spay/neuter, vaccinations, and microchipping. Adopters will also receive a free tote bag and gift bag while supplies last.

“Our shelter is full of a variety dogs in need of a loving home, and we are thrilled to be partnering with the Best Friends Animal Society to offer this adoption special,” county animal services manager Cassie Heffington said. “It is a win-win for us to be able to adopt out the animals we have and make room for other animals in need of our shelter and care.”

Best Friends Animal Society is a leading animal welfare organization working to end the killing of dogs and cats in America’s shelters by 2025. Founded in 1984, Best Friends is a pioneer in the no-kill movement and has helped reduce the number of animals killed in shelters from an estimated 17 million per year to about 347,000. Best Friends runs lifesaving programs all across the country, as well as the nation’s largest no-kill animal sanctuary. Working collaboratively with a network of more than 3,300 animal welfare and shelter partners, and community members nationwide, Best Friends is working to Save Them All®. For more information, visit bestfriends.org.

“The goal of this campaign is to get 500 or more big dogs across California into homes in two weeks,” said Kaylee Hawkins, Pacific region director at Best Friends Animal Society. “Since it’s been hard to live large in the usual ways during this pandemic, our message is that a big dog can bring lots of love and fun into your life. Even if you live in a small space, there’s a big dog waiting in a shelter that can be perfect for you.”

Anyone interested in adopting a pet, especially a large dog, can contact Tulare County Animal Services by calling (559) 636-4050 or by visiting www.tcanimalservices.org to view the animals currently available for adoption. The shelter is taking appointments between the hours of 10 a.m. and 4 p.m. Monday through Saturday.